Sources and Sinks of Essential Elements

Biogeochemical cycles are pathways by which essential elements flow from the abiotic and biotic compartments of the Earth.

Most important substances on Earth, such as oxygen, nitrogen, and water undergo turnover or cycling through both the biotic (living) and abiotic (geological, atmospheric, and hydrologic) compartments of the Earth. Flows of nutrients from living to non-living components of the Earth are called biogeochemical cycles.

Nutrient Cycles and the Biosphere

Ecosystems hinge on biogeochemical cycles. The nitrogen cycle, the phosphorous cycle, the sulfur cycle, and the carbon cycle all involve assimilation of these nutrients into living things. These elements are transferred among living things through food webs, until organisms ultimately die and release them back into the geosphere.

The Carbon Cycle: The element carbon moves from the biosphere to the geosphere and the hydrosphere. This flow from abiotic to biotic compartments of the Earth is typical of biogeochemical cycles.

Although the Earth receives energy from the Sun, the chemical composition of the planet is more or less fixed. Matter is occasionally added by meteorites, but supplies of essential elements generally do not change. However, human activity can change the proportion of nutrients that are in reservoirs and in circulation. For example, coal is a resevoir of carbon, but the human use of fossil fuels has released carbon into the atmosphere, increasing the amount of carbon in circulation. Likewise, phosphorous and nitrogen are extracted from geological reservoirs and used in phosphorous, and excesses of these elements have caused the overgrowth of plant matter and the disruption of many ecosystems.

The carbon cycle describes the flow of carbon from the atmosphere to the marine and terrestrial biospheres, and the earth’s crust.

The carbon cycle describes the flow of carbon between the biosphere, the geosphere, and the atmosphere, and is essential to maintaining life on earth. 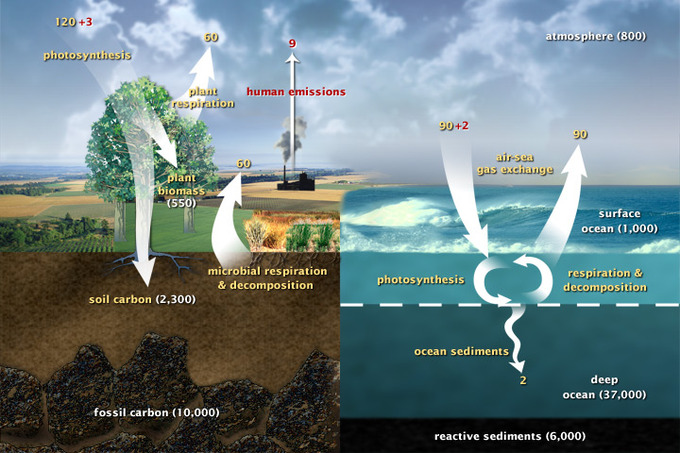 The Carbon Cycle: The carbon cycle describes the flow of carbon between the atmosphere, the biosphere, and the geosphere.

Terrestrial Biosphere: The terrestrial biosphere includes the organic carbon in all land-living organisms, both alive and dead, as well as carbon stored in soils. Although people often imagine plants as the most important part of the terrestrial carbon cycle, microorganisms such as single celled algae and chemoautotrophic bacteria are also important in converting atmospheric CO2 into terrestrial carbon. Carbon is incorporated into living things as part of organic molecules, either through photosynthesis or by animals that consume plants and algae. Some of the carbon in living things is released through respiration, while the rest remains in the tissue. Once organisms die, bacteria break down their tissues, releasing CO2 back into the atmosphere or into the soil.

Marine Biosphere: The carbon cycle in the marine biosphere is very similar to that in the terrestrial ecosystem. CO2 dissolves in the water and algae, plants and bacteria convert it into organic carbon. Carbon may transfer between organisms (from producers to consumers). Their tissues are ultimately broken down by bacteria and CO2 is released back into the ocean or atmosphere.

NASA | A Year in the Life of Earth’s CO2: An ultra-high-resolution NASA computer model has given scientists a stunning new look at how carbon dioxide in the atmosphere travels around the globe. Plumes of carbon dioxide in the simulation swirl and shift as winds disperse the greenhouse gas away from its sources. The simulation also illustrates differences in carbon dioxide levels in the northern and southern hemispheres and distinct swings in global carbon dioxide concentrations as the growth cycle of plants and trees changes with the seasons. The carbon dioxide visualization was produced by a computer model called GEOS-5, created by scientists at NASA Goddard Space Flight Center’s Global Modeling and Assimilation Office. The visualization is a product of a simulation called a “Nature Run.” The Nature Run ingests real data on atmospheric conditions and the emission of greenhouse gases and both natural and man-made particulates. The model is then left to run on its own and simulate the natural behavior of the Earth’s atmosphere. This Nature Run simulates January 2006 through December 2006. While Goddard scientists worked with a “beta” version of the Nature Run internally for several years, they released this updated, improved version to the scientific community for the first time in the fall of 2014.

Syntrophy or cross feeding is when one species lives off the products of another species. A frequently cited example of syntrophy are methanogenic archaea bacteria and their partner bacteria that perform anaerobic fermentation. 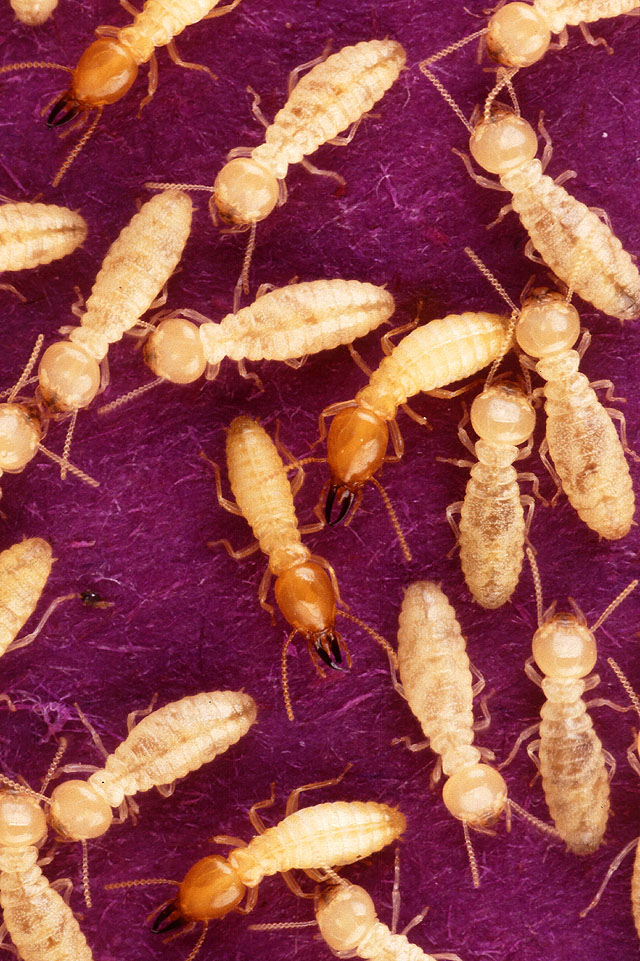 Methanogenic Bacteria in Termites: Methanogenic bacteria have a syntrophic relationship with protozoans living in the guts of termites. The protozoans break down cellulose, releasing H2 which is then used in methanogenesis.

Methanogenesis in microbes is a form of anaerobic respiration, performed by bacteria in the domain Archaea. Unlike other microorganisms, methanogens do not use oxygen to respire; but rather oxygen inhibits the growth of methanogens. In methanogenesis, carbon is used as the terminal electron receptor instead of oxygen. Although there are a variety of potential carbon based compounds that are used as electron receptors, the two best described pathways involve the use of carbon dioxide and acetic acid as terminal electron acceptors.

Methanogenic archea bacteria can also form associations with other organisms. For example, they may also associate with protozoans living in the guts of termites. The protozoans break down the cellulose consumed by termites, and release hydrogen, which is then used in methanogenesis.

Phosphorus, important for creating nucleotides and ATP, is assimilated by plants, then released through decomposition when they die.

The phosphorous cycle is affected by human activities. Although phosphorous is normally a limiting nutrient, most agricultural fertilizers contain phosphorous. Run-off and drainage from farms can flood aquatic ecosystems with excess phosphorus. Artificial phosphorous can cause over growth of algae and plants in aquatic ecosytems. When the excess plant material is broken down, the decomposing bacteria can use up all the oxygen in the water causing dead zones. Most bodies of water gradually become more productive over time through the slow, natural accumulation of nutrients in a process called eutrophication. However, overgrowth of algae due to phosphorous fertilizer is called “cultural eutrophication” or “hypertrophication,” and is generally negative for ecosystems. 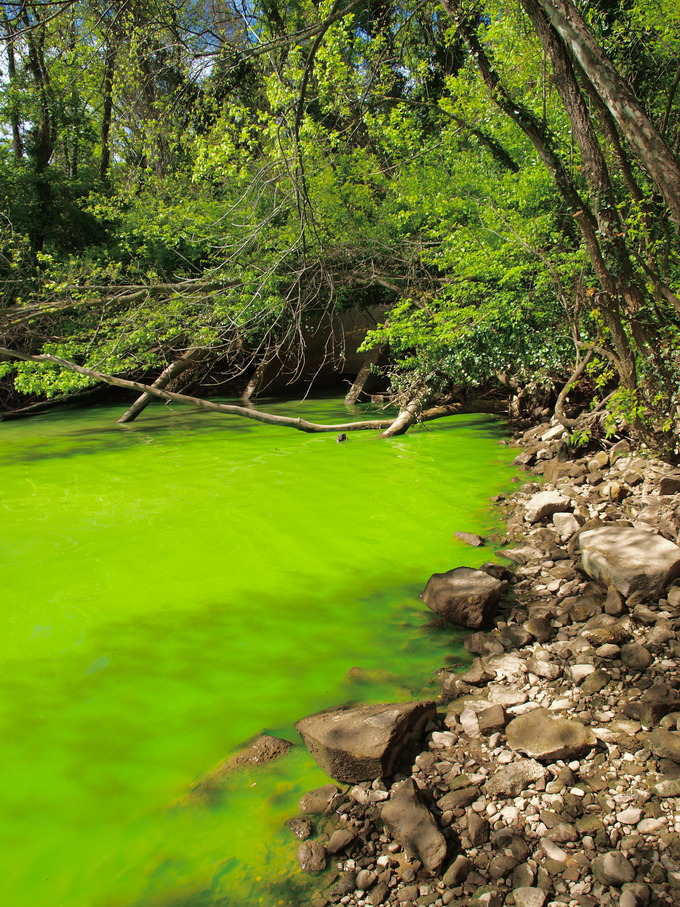 Hypertrophication on the Potomac River: The bright green color of the water is the result of algae blooms in response to the addition of phosphorous based fertilizers.

The nitrogen cycle is the process by which nitrogen is converted from organic to inorganic forms; many steps are performed by microbes.

The nitrogen cycle describes the conversion of nitrogen between different chemical forms. The majority of the earth’s atmosphere (about 78%) is composed of atmospheric nitrogen, but it is not in a form that is usable to living things. Complex species interactions allow organisms to convert nitrogen to usable forms and exchange it between themselves. Nitrogen is essential for the formation of amino acids and nucleotides. It is essential for all living things.

Fixation: In order for organisms to use atmospheric nitrogen (N2), it must be “fixed” or converted into ammonia (NH3). This can happen occasionally through a lightning strike, but the bulk of nitrogen fixation is done by free living or symbiotic bacteria. These bacteria have the nitrogenase enzyme that combines gaseous nitrogen with hydrogen to produce ammonia. It is then further converted by the bacteria to make their own organic compounds. Some nitrogen fixing bacteria live in the root nodules of legumes where they produce ammonia in exchange for sugars. Today, about 30% of the total fixed nitrogen is manufactured in chemical plants for fertilizer.

The role of soil bacteria in the Nitrogen cycle: Nitrogen transitions between various biologically useful forms.

Nitrificaton: Nitrification is the conversion of ammonia (NH3) to nitrate (NO3–). It is usually performed by soil living bacteria, such as nitrobacter. This is important because plants can assimilate nitrate into their tissues, and they rely on bacteria to convert it from ammonia to a usable form. Nitrification is performed mainly by the genus of bacteria, Nitrobacter.

Ammonification /Mineralization: In ammonification, bacteria or fungi convert the organic nitrogen from dead organisms back into ammonium (NH4+). Nitrification can also work on ammonium. It can either be cycled back into a plant usable form through nitrification or returned to the atmosphere through de-nitrification.

De-Nitrification: Nitrogen in its nitrate form (NO3–) is converted back into atmospheric nitrogen gas (N2) by bacterial species such as Pseudomonas and Clostridium, usually in anaerobic conditions. These bacteria use nitrate as an electron acceptor instead of oxygen during respiration.

The sulfur cycle describes the movement of sulfur through the atmosphere, mineral forms, and through living things. Although sulfur is primarily found in sedimentary rocks or sea water, it is particularly important to living things because it is a component of many proteins.

Sulfur is released from geologic sources through the weathering of rocks. Once sulfur is exposed to the air, it combines with oxygen, and becomes sulfate SO4. Plants and microbes assimilate sulfate and convert it into organic forms. As animals consume plants, the sulfur is moved through the food chain and released when organisms die and decompose.

Some bacteria – for example Proteus, Campylobacter, Pseudomonas and Salmonella – have the ability to reduce sulfur, but can also use oxygen and other terminal electron acceptors. Others, such as Desulfuromonas, use only sulfur. These bacteria get their energy by reducing elemental sulfur to hydrogen sulfide. They may combine this reaction with the oxidation of acetate, succinate, or other organic compounds.

The most well known sulfur reducing bacteria are those in the domain Archea, which are some of the oldest forms of life on Earth. They are often extremophiles, living in hot springs and thermal vents where other organisms cannot live. Lots of bacteria reduce small amounts of sulfates to synthesize sulfur-containing cell components; this is known as assimilatory sulfate reduction. By contrast, the sulfate-reducing bacteria considered here reduce sulfate in large amounts to obtain energy and expel the resulting sulfide as waste. This process is known as dissimilatory sulfate reduction. In a sense, they breathe sulfate.

Sulfur metabolic pathways for bacteria have important medical implications. For example, Mycobacterium tuberculosis (the bacteria causing tuberculosis) and Mycobacterium leprae (which causes leoprosy) both utilize sulfur, so the sulfur pathway is a target of drug development to control these bacteria.

Iron is an important limiting nutrient required for plants and animals; it cycles between living organisms and the geosphere.

Iron (Fe) follows a geochemical cycle like many other nutrients. Iron is typically released into the soil or into the ocean through the weathering of rocks or through volcanic eruptions.

The Terrestrial Iron Cycle: In terrestrial ecosystems, plants first absorb iron through their roots from the soil. Iron is required to produce chlorophyl, and plants require sufficient iron to perform photosynthesis. Animals acquire iron when they consume plants, and iron is utilized by vertebrates in hemoglobin, the oxygen-binding protein found in red blood cells. Animals lacking in iron often become anemic and cannot transmit adequate oxygen. Bacteria then release iron back into the soil when they decompose animal tissue.

The Marine Iron Cycle: The oceanic iron cycle is similar to the terrestrial iron cycle, except that the primary producers that absorb iron are typically phytoplankton or cyanobacteria. Iron is then assimilated by consumers when they eat the bacteria or plankton. The role of iron in ocean ecosystems was first discovered when English biologist Joseph Hart noticed “desolate zones,” which are regions that lacked plankton but were rich in nutrients. He hypothesized that iron was the limiting nutrient in these areas. In the past three decades there has been research into using iron fertilization to promote alagal growth in the world’s oceans. Scientists hoped that by adding iron to ocean ecosystems, plants might grown and sequester atmospheric CO2. Iron fertilization was thought to be a possible method for removing the excess CO2 responsible for climate change. Thus far, the results of iron fertilization experiments have been mixed, and there is concern among scientists about the possible consequences of tampering nutrient cycles. 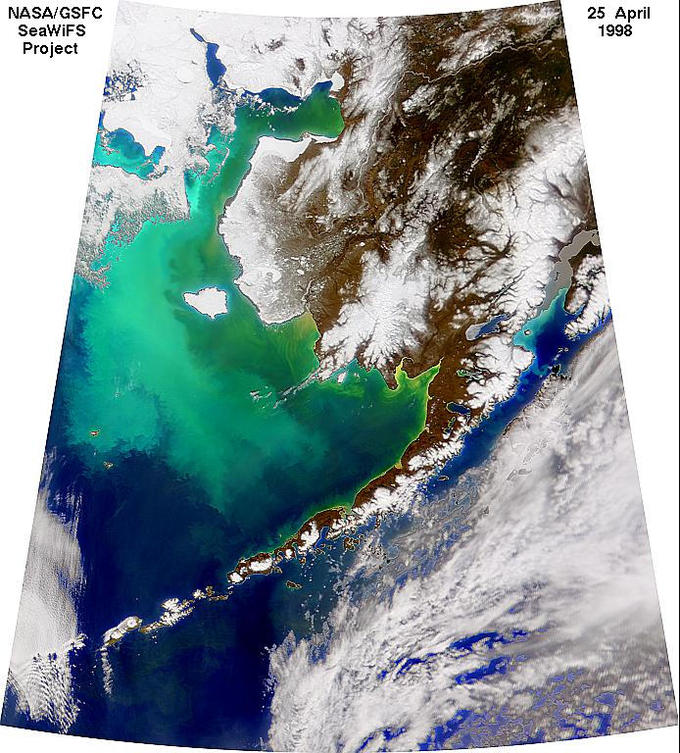