Bacteroides and Flavobacterium are both Gram-negative bacteria that can be either motile or non-motile.

Bacteroides include a specific genus of gram-negative bacillus bacteria. This genus of bacteria is characterized by their sphingolipid based membranes and are typically non-endospore forming and anaerobic. The bacteroides are further characterized as mutualistic and have been identified in the mammalian gastrointestinal system. The ability of the bacteroides to function in an anaerobic environment allow them to reside in the abdominal cavity in aerotolerant conditions. The presence of bacteroides in the normal flora of mammals is indicative of its role in processing complex molecules to simpler ones that can be utilized by the host. The energy sources for the bacteroides are typically derived from the host. The role of bacteroides in the normal flora extends beyond their ability to breakdown larger complex molecules and can display protective function. The bacteroides are able to benefit the host by preventing infection by potential pathogens that may colonize and infect the gut as well. Due to the abundancy of the bacteroides within the gastrointestinal system, bacteroides constitute a significant portion of the fecal bacterial population. 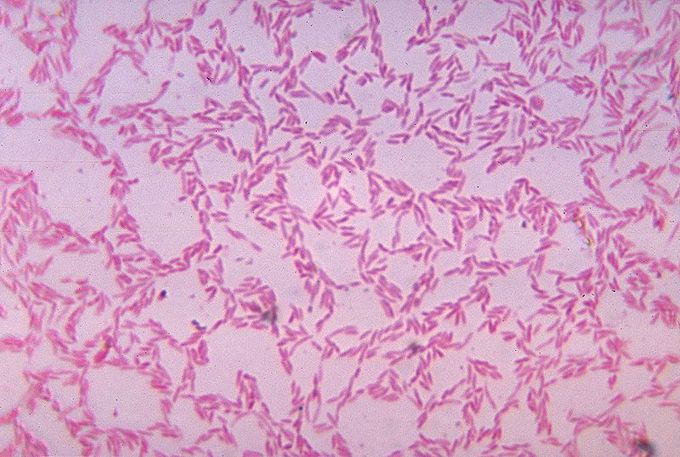 Flavobacterium include a specific genus of gram-negative bacteria that are characterized by their presence in soil and fresh water environments. Flavobacterium can be either non-motile or motile and are rod-shaped. To date, there are 10 established species of flavobacterium and several new proposed species. The flavbacterium are characterized by their ability to cause disease in freshwater fish such as salmon and rainbow trouts. For example, the species Flavobacterium psychrophilum is responsible for causing Bacterial Cold Water Disease (BCWD) on salmonids and Rainbow Trout Fry Disease (RTFS) on rainbow trouts. The species Flavobacterium branchiophilum causes the Bacterial Gill Disease (BGD) on trouts.

Acidobacteria are a newly formed phylum of bacteria that are physiologically diverse and abundant in soil environments. 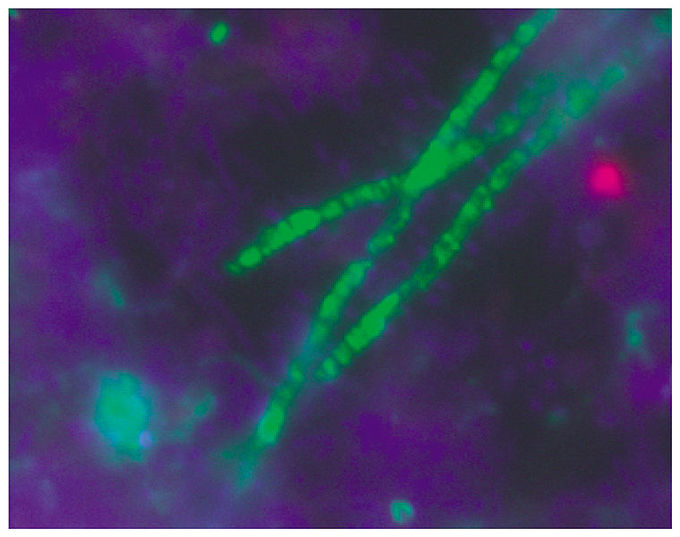 Acdiobacterium: An image of an Acidobacteria.

Acidophilic organisms are capable of thriving under highly acidic conditions. The ability to thrive under acidic conditions has promoted the evolution of highly efficient and effective mechanisms that lend them protection in these environments. For example, most acidophiles are able to pump protons out of the intracellular space to maintain a neutral pH within the cytoplasm. The mechanisms used to pump protons out are quick and effective. This is advantageous as the intracellular proteins are not required to develop tolerance against highly acidic conditions. However, not all members of this phylum are considered to be acidophilic.

Since they have only recently been discovered and the large majority have not been cultured, the ecology and metabolism of these bacteria is not well understood. However, these bacteria may be an important contributor to ecosystems, since they are particularly abundant within soils. The first species of this phylum, Acidobacterium capsulatum, was discovered in 1991. Other notable species are Holophaga foetida, Geothrix fermentans, Acanthopleuribacter pedis, and Bryobacter aggregatus.

Cytophaga are a type of bacteria characterized as Gram-negative, rod shaped bacteria that utilize a gliding mechanism for locomotion.

Describe the unique form of locomotion for Cytophaga

Cytophaga represent gram-negative, gliding, rod-shaped bacteria. The bacterial gliding is a form of locomotion utilized by Cytophaga that allows the bacteria to move under its own power. In this specific type of locomotion, the exact mechanisms are unknown, but it is known that this process does not require a flagella. However, a few mechanisms have been partially identified in certain species that utilize the gliding locomotion and these include the use of a type IV pili, the use of focal adhesion complexes distributed through the body, and the use of a polysaccharide slime that is ejected from one the ends of the body. Gliding can also be found in bacteria that are categorized as cyanobacteria and myxobacteria. 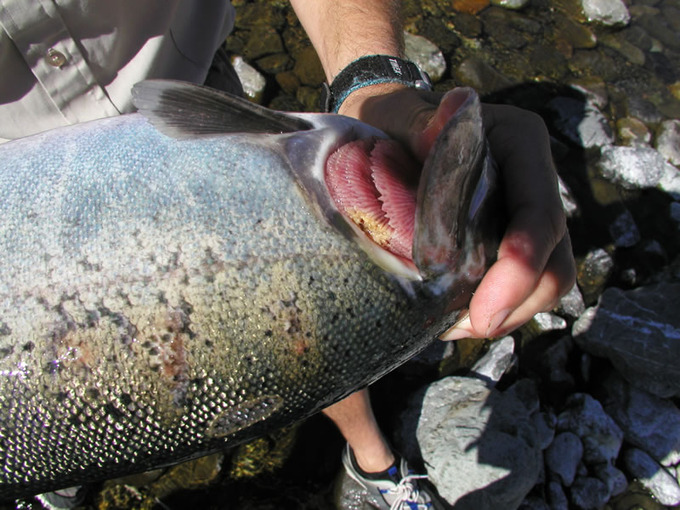 Columnaris disease: An image of a chinook salmon that has been infected with Cytophaga columnaris and has lesions and ulcerations on the gill.

Bacteria categorized under the Phylum Bacteroidetes and Phlyum Chlorobi are closely related base on comparative genomic analysis.

Describe the major classes of Bacteroidetes, including: Bacteroidia and Porphyromonas a well as Phlyum Chlorobi 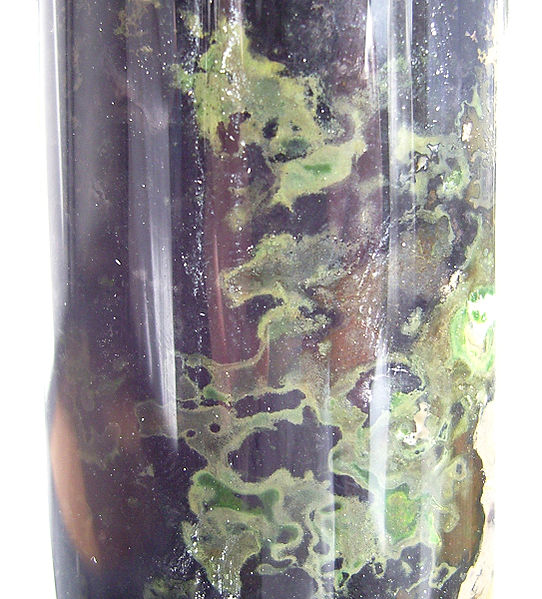 The Phylum Bacteroidetes are characterized as rod-shaped, gram-negative bacteria that are non-spore forming and are present in anaerobic environments. Bacteroidetes are capable of thriving in numerous environments that include soil, sediments, sea water, and in the guts and on skin of animal hosts. The Bacteroidetes are classified into three large classes which include the Bacteroidia class and the Porphyromonas class. The Bacteroidia class is the most studied and is present in the gastrointestinal system of mammals which allows it to be abundant in the feces. The Porphyromonas class is characterized by their presence in the oral cavity of humans. The bacteria categorized as bacteroidetes are opportunistic and are rarely pathogenic as they constitute part of the normal flora.

The Phlyum Chlorobi is often grouped with the Phlyum Bacteroidetes because their branches are very close together in the phylogenetic tree. By utilizing sequencing techniques such as comparative genomic analysis, there have been three proteins which are unique to all members of the Bacteroidetes and Chlorobi phyla but not to other bacteria indicating a conserved protein signature. Further analysis has identified additional molecular signatures that support the close relationship between these two phyla as well indicating a common ancestor.

Fusobacterium are anaerobic, non-spore forming, gram-negative bacteria that are associated with periodontal disease and Lemierre’s syndrome.

Describe the role of Fusobacterium in Lemierre’s syndrome

Fusobacteria are a genus of bacteria categorized as gram-negative with similarities to Bacteroides. Fusobacteria are rod-shaped bacilli capable of thriving in anaerobic conditions. However, in contrast to Bacteroides, Fusobacterium have a potent lipopolysaccharide that can function as an endotoxin. The Fusobacterium are associated with infection and disease including periodontal diseases, topical skin ulcers and Lemierres’s syndrome. Fusobacterium are difficult to identify in the laboratory due to their asaccharolytic nature. However, the use of novel molecular biology techniques has allowed for the the identification of new species that are included in Fusobacterium. The diseases attributed to Fusobacterium infection involve symptoms that include tissue necrosis, septicemia, intra-amniotic infections and ulcers. 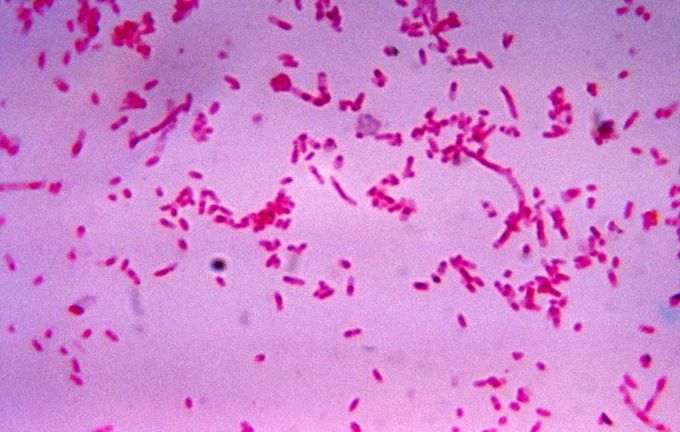 A specific disease caused by Fusobacteria includes Lemierres’s syndrome. Lemierres’s syndrome is also known as postanginal sepsis and is a form of thrombophlebitis. Thrombophlebitis is inflammation caused by a blood clot. In individuals infected with Fusobacterium necrophorum and additonal Fusobacterium as well, a sore develops in the throat due to infection by a bacterium of the Streptococcus genus. Once this sore develops into a peritonsillar abscess, the pocket is filled with pus and bacteria in close proximity to the tonsils. At this point, bacteria which are capable of thriving in anaerobic conditions, such as Fusobacterium necrophorum can flourish deep in the abscess. At this point, the bacteria are able to pass into the neighboring jugular vein and cause an infected clot to form. The bacteria are then able to circulate throughout the body via the bloodstream and pieces of the blood clot will dissociate from the original site and travel to the lungs. The pieces of the clot will settle in the lungs and block branches of the pulmonary artery, resulting in shortness of breath, chest pain and pneumonia. Fusobacteria are normal flora within the oropharyngeal and can clearly result in disease if conditions are optimal.

Spirochaetes are characterized by the presence of a double-membrane and long, spiral-shaped cells that are chemoheterotrophic.

Outline the characteristics associated with spirochaetes and the associated diseases

The spirochaetes belong to a phylum of distinctive double-membrane bacteria that are characterized by their long, spiral-shaped cells. The spirochaetes are chemoheterotrophic in nature, free-living and capable of thriving in anaerobic environments. They are often distinguished from other bacterial phyla by the location of their flagella. The flagella, in spirochaetes, runs lengthwise between the inner and outer membranes in the periplasmic space. Often referred to as axial filaments, there is a twisting motion that occurs which allows the spirochaete to move. During reproduction, the spirochaete is capable of undergoing asexual reproduction via binary fission. The binary fission allows for production of two separate spirochaetes.