Overview of Prokaryotic and Eukaryotic Cells

A prokaryote is a simple, unicellular organism that lacks an organized nucleus or other membrane-bound organelle. 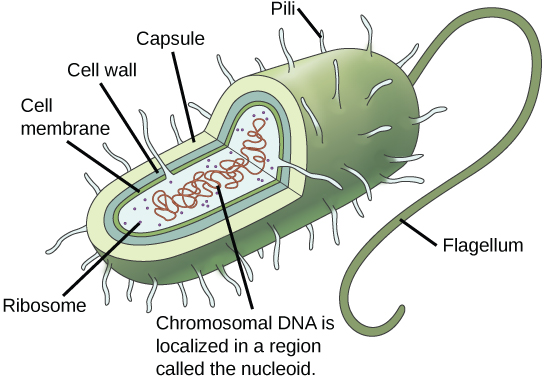 General Structure of a Prokaryotic Cell: This figure shows the generalized structure of a prokaryotic cell.All prokaryotes have chromosomal DNA localized in a nucleoid, ribosomes, a cell membrane, and a cell wall.The other structures shown are present in some, but not all, bacteria.

However, prokaryotes differ from eukaryotic cells in several ways.

A prokaryote is a simple, single-celled (unicellular) organism that lacks an organized nucleus or any other membrane-bound organelle. We will shortly come to see that this is significantly different in eukaryotes. Prokaryotic DNA is found in a central part of the cell: the nucleoid.

Most prokaryotes have a peptidoglycan cell wall and many have a polysaccharide capsule. The cell wall acts as an extra layer of protection, helps the cell maintain its shape, and prevents dehydration. The capsule enables the cell to attach to surfaces in its environment. Some prokaryotes have flagella, pili, or fimbriae. Flagella are used for locomotion. Pili are used to exchange genetic material during a type of reproduction called conjugation. Fimbriae are used by bacteria to attach to a host cell. 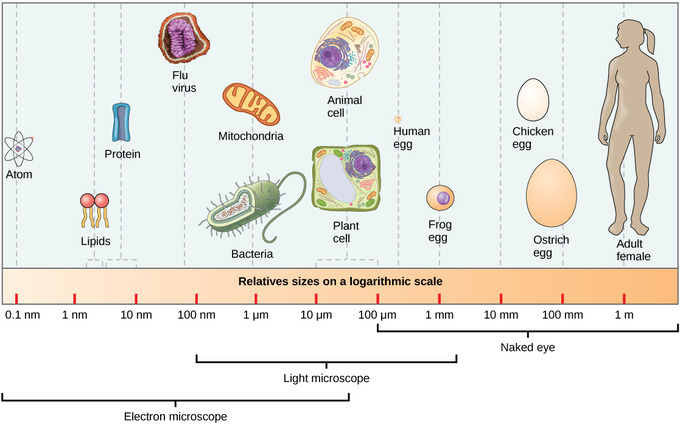 Small size, in general, is necessary for all cells, whether prokaryotic or eukaryotic. Let’s examine why that is so. First, we’ll consider the area and volume of a typical cell. Not all cells are spherical in shape, but most tend to approximate a sphere. You may remember from your high school geometry course that the formula for the surface area of a sphere is 4πr2, while the formula for its volume is 4/3πr3. Thus, as the radius of a cell increases, its surface area increases as the square of its radius, but its volume increases as the cube of its radius (much more rapidly). Therefore, as a cell increases in size, its surface area-to-volume ratio decreases. This same principle would apply if the cell had the shape of a cube. If the cell grows too large, the plasma membrane will not have sufficient surface area to support the rate of diffusion required for the increased volume. In other words, as a cell grows, it becomes less efficient. One way to become more efficient is to divide; another way is to develop organelles that perform specific tasks. These adaptations led to the development of more sophisticated cells called eukaryotic cells.