Discovery and Detection of Viruses

Viruses are infectious particles about 100 times smaller than bacteria and can only be observed by electron microscopy.

Describe how viruses were first discovered and how they are detected 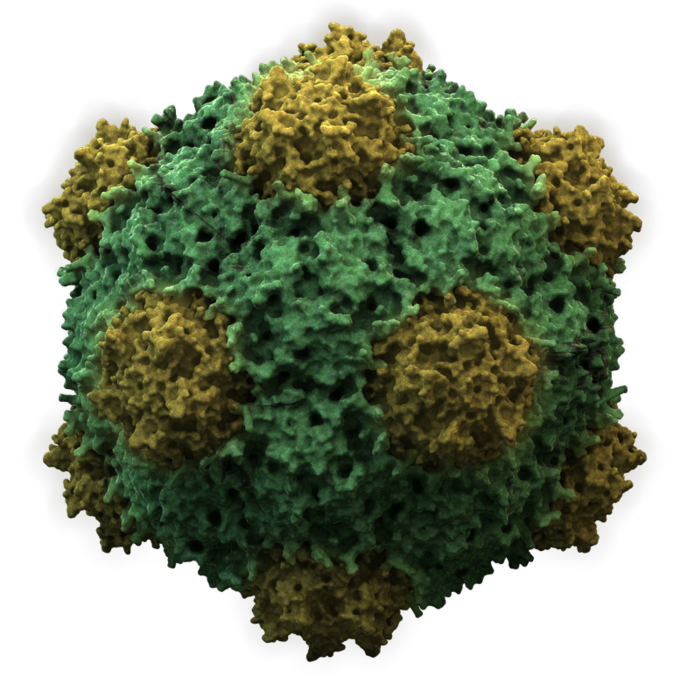 The structure of the icosahedral cowpea mosaic virus: In the past, viruses were classified by the type of nucleic acid they contained, DNA or RNA, and whether they had single- or double-stranded nucleic acid.

Viruses were first discovered after the development of a porcelain filter, called the Chamberland-Pasteur filter, which could remove all bacteria visible in the microscope from any liquid sample. In 1886, Adolph Meyer demonstrated that a disease of tobacco plants, tobacco mosaic disease, could be transferred from a diseased plant to a healthy one via liquid plant extracts. In 1892, Dmitri Ivanowski showed that this disease could be transmitted in this way even after the Chamberland-Pasteur filter had removed all viable bacteria from the extract. Still, it was many years before it was proven that these “filterable” infectious agents were not simply very small bacteria, but were a new type of tiny, disease-causing particle.

Virions, single virus particles, are very small, about 20–250 nanometers in diameter. These individual virus particles are the infectious form of a virus outside the host cell. Unlike bacteria (which are about 100 times larger), we cannot see viruses with a light microscope, with the exception of some large virions of the poxvirus family. It was not until the development of the electron microscope in the late 1930s that scientists got their first good view of the structure of the tobacco mosaic virus (TMV) and other viruses. The surface structure of virions can be observed by both scanning and transmission electron microscopy, whereas the internal structures of the virus can only be observed in images from a transmission electron microscope. The use of these technologies has enabled the discovery of many viruses of all types of living organisms. They were initially grouped by shared morphology. Later, groups of viruses were classified by the type of nucleic acid they contained, DNA or RNA, and whether their nucleic acid was single- or double-stranded. More recently, molecular analysis of viral replicative cycles has further refined their classification. 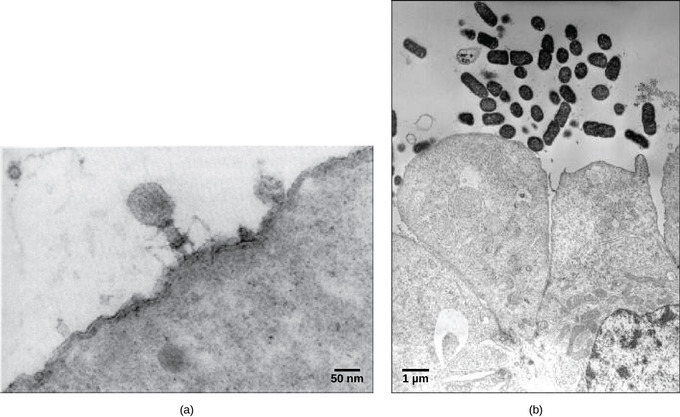 Nature of the Virion

A virion is a complete viral particle consisting of RNA or DNA surrounded by a protein shell, constituting the infective form of a virus.

Illustrate the attributes of a virion 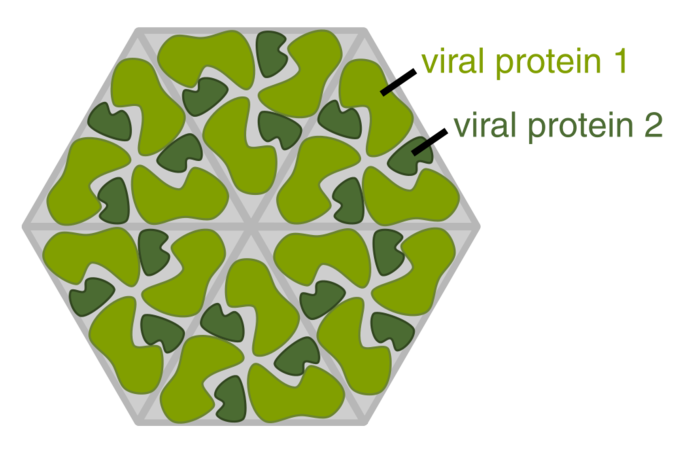 Virion capsid: Structure of a capsid and the organization of molecules that constitute it.

A virion is an entire virus particle consisting of an outer protein shell called a capsid and an inner core of nucleic acid (either ribonucleic or deoxyribonucleic acid—RNA or DNA). The core confers infectivity, and the capsid provides specificity to the virus. In some virions the capsid is further enveloped by a fatty membrane, in which case the virion can be inactivated by exposure to fat solvents such as ether and chloroform. Many virions are spheroidal—actually icosahedral (the capsid having 20 triangular faces)—with regularly arranged units called capsomeres, two to five or more along each side. The nucleic acid is densely coiled within. Other virions have a capsid consisting of an irregular number of surface spikes, with the nucleic acid loosely coiled within. Virions of most plant viruses are rod-shaped; the capsid is a naked cylinder (lacking a fatty membrane) within which lies a straight or helical rod of nucleic acid.

Virion capsids are formed from identical protein subunits called capsomeres. Viruses can have a lipid “envelope” derived from the host cell membrane. The capsid is made from proteins encoded by the viral genome and its shape serves as the basis for morphological distinction. Virally coded protein subunits will self-assemble to form a capsid, in general requiring the presence of the virus genome. Complex viruses code for proteins that assist in the construction of their capsid. Proteins associated with nucleic acid are known as nucleoproteins, and the association of viral capsid proteins with viral nucleic acid is called a nucleocapsid. The capsid and entire virus structure can be mechanically (physically) probed through atomic force microscopy.

The viral genome is the complete genetic complement contained in a DNA or RNA molecule in a virus.

Generalize the features of viral genomes

Viral diseases have an enormous impact on human health worldwide. Genomic technologies are providing infectious disease researchers an unprecedented capability to study at a genetic level the viruses that cause disease and their interactions with infected hosts. An enormous variety of genomic structures can be seen among viral species; as a group, they contain more structural genomic diversity than plants, animals, archaea, or bacteria. There are millions of different types of viruses, although only about 5,000 of them have been described in detail.

Diagram of a virus: The location of the genome inside the virus.

A virus has either DNA or RNA genes and is called a DNA virus or a RNA virus, respectively. The vast majority of viruses have RNA genomes. Plant viruses tend to have single-stranded RNA genomes and bacteriophages tend to have double-stranded DNA genomes. Viral genomes are circular, as in the polyomaviruses, or linear, as in the adenoviruses. The type of nucleic acid is irrelevant to the shape of the genome. Among RNA viruses and certain DNA viruses, the genome is often divided up into separate parts, in which case it is called segmented. For RNA viruses, each segment often codes for only one protein, and they are usually found together in one capsid. However, all segments are not required to be in the same virion for the virus to be infectious, as demonstrated by the brome mosaic virus and several other plant viruses.

A virus’ host range is the range of cell types and host species a virus is able to infect. 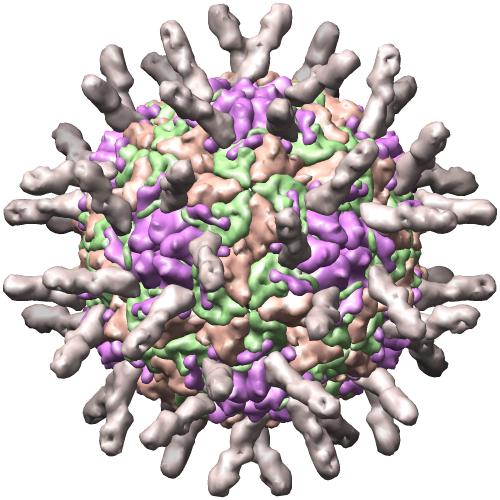 A host is an organism that harbors a parasite or a mutual or commensal symbiont, typically providing nourishment and shelter. Resistance to and recovery from viral infections depend on the interactions that occur between the virus and the host. The defenses mounted by the host may act directly on the virus or indirectly on virus replication by altering or killing the infected cell. Non-specific host defenses function early in an encounter with a virus to prevent or limit infection, while the specific host defenses function after infection in recovery to provide immunity for subsequent challenges.

The host defense mechanisms involved in a particular viral infection will vary depending on the virus, dose, and portal of entry. The host has many barriers against infection that are inherent in the organism. These represent the first line of defense, which functions to prevent or limit infection Examples of natural barriers include but are not limited to skin, the expression of surface receptors such as CD4, complement receptors, glycophorin, intercelullar adhesion molecule 1 (ICAM-1), mucus, a ciliated epithelium, low pH, and humoral and cellular components.

Most viruses range in size from 5 to 300 nanometers (nm), although some Paramyxoviruses can be up to 14,000 nm long.

Recognize the cause and effect of different sizes of viruses

A virus is an infectious agent of small size and simple composition that can multiply only in living cells of animals, plants, or bacteria. They range in size from about 20 to 400 nanometres in diameter (1 nanometre = 10-9 meters). By contrast, the smallest bacteria are about 400 nanometres in size. A virus consists of a single- or double-stranded nucleic acid and at least one protein surrounded by a protein shell, called a capsid; some viruses also have an outer envelope composed of fatty materials (lipids) and proteins. The nucleic acid carries the virus’s genome —its collection of genes—and may consist of either deoxyribonucleic acid ( DNA ) or ribonucleic acid (RNA). The protein capsid provides protection for the nucleic acid and may contain enzymes that enable the virus to enter its appropriate host cell. 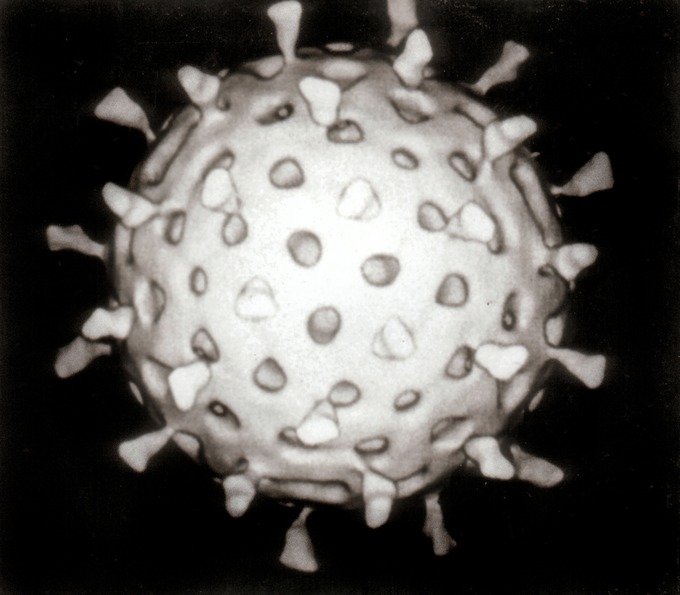 Viral structure: Rotavirus particles measure 76.5 nm in diameter and are not enveloped.

There exists a strong association between viral geometry and features of viral disease outbreaks. The amount and arrangement of the proteins and nucleic acid of viruses determine their size and shape. The protein and nucleic acid constituents have properties unique for each class of virus; when assembled, they determine the size and shape of the virus for that specific class.

Only the largest and most complex viruses can be seen under the light microscope at the highest resolution. Any determination of the size of a virus also must take into account its shape, since different classes of viruses have distinctive shapes. Shapes of viruses are predominantly of two kinds: rods, or filaments, so called because of the linear array of the nucleic acid and the protein subunits; and spheres, which are actually 20-sided (icosahedral) polygons. Most plant viruses are small and are either filaments or polygons, as are many bacterial viruses. The larger and more-complex bacteriophages contain double-stranded DNA as their genetic information and combine both filamentous and polygonal shapes. The classic T4 bacteriophage is composed of a polygonal head, which contains the DNA genome, and a special-function rod-shaped tail of long fibres. Structures such as these are unique to the bacteriophages.