A cofactor is a non-protein chemical compound that is bound to a protein and is required for the protein’s biological activity.

Recognize the various types of cofactors involved in biochemical reactions

A cofactor is a non- protein chemical compound that is bound to a protein and is required for the protein’s biological activity. These proteins are commonly enzymes. Cofactors can be considered “helper molecules” that assist in biochemical transformations. 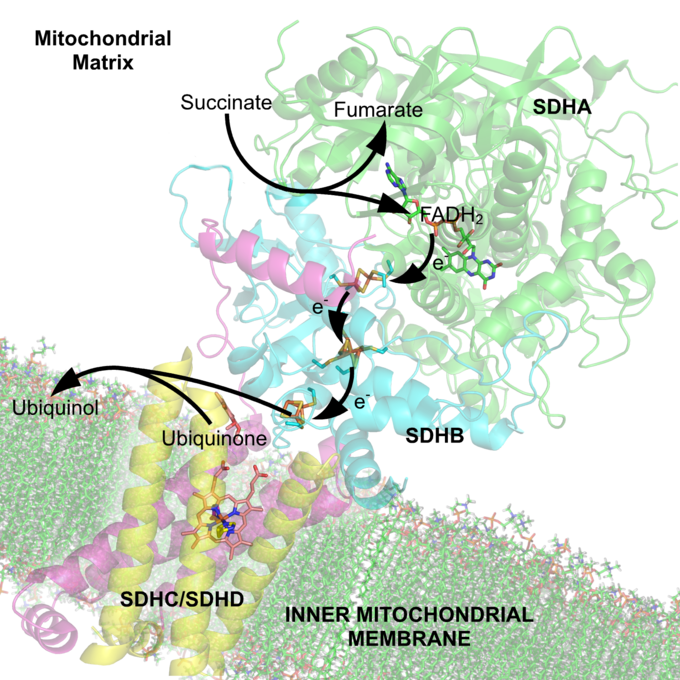 Cofactors are either organic or inorganic. They can also be classified depending on how tightly they bind to an enzyme, with loosely-bound cofactors termed coenzymes and tightly-bound cofactors termed prosthetic groups. Some sources also limit the use of the term “cofactor” to inorganic substances. An inactive enzyme without the cofactor is called an apoenzyme, while the complete enzyme with cofactor is the holoenzyme.

Organic cofactors are often vitamins or are made from vitamins. Many contain the nucleotide adenosine monophosphate (AMP) as part of their structures, such as ATP, coenzyme A, FAD, and NAD+. This common structure may reflect a common evolutionary origin as part of ribozymes in an ancient RNA world. It has been suggested that the AMP part of the molecule can be considered a kind of “handle” by which the enzyme can “grasp” the coenzyme to switch it between different catalytic centers.

Vitamins can serve as precursors to many organic cofactors (e.g., vitamins B1, B2, B6, B12, niacin, folic acid) or as coenzymes themselves (e.g., vitamin C). However, vitamins do have other functions in the body. Many organic cofactors also contain a nucleotide, such as the electron carriers NAD and FAD, and coenzyme A, which carries acyl groups. Most of these cofactors are found in a huge variety of species, and some are universal to all forms of life. An exception to this wide distribution is a group of unique cofactors that evolved in methanogens, which are restricted to this group of archaea.

Metabolism involves a vast array of chemical reactions, but most fall under a few basic types of reactions that involve the transfer of functional groups. This common chemistry allows cells to use a small set of metabolic intermediates to carry chemical groups between different reactions. These group-transfer intermediates are the loosely-bound organic cofactors, often called coenzymes.

Each class of group-transfer reaction is carried out by a particular cofactor, which is the substrate for a set of enzymes that produce it and a set of enzymes that consume it. An example of this is the dehydrogenases that use nicotinamide adenine dinucleotide (NAD+) as a cofactor. Here, hundreds of separate types of enzymes remove electrons from their substrates and reduce NAD+ to NADH. This reduced cofactor is then a substrate for any of the reductases in the cell that require electrons to reduce their substrates.

Therefore, these cofactors are continuously recycled as part of metabolism. As an example, the total quantity of ATP in the human body is about 0.1 mole. This ATP is constantly being broken down into ADP, and then converted back into ATP. Therefore, at any given time, the total amount of ATP + ADP remains fairly constant. The energy used by human cells requires the hydrolysis of 100 to 150 moles of ATP daily, which is around 50 to 75 kg. In typical situations, humans use up their body weight of ATP over the course of the day. This means that each ATP molecule is recycled 1,000 to 1,500 times daily.

The term is used in other areas of biology to refer more broadly to non-protein (or even protein) molecules that either activate, inhibit, or are required for the protein to function. For example, ligands such as hormones that bind to and activate receptor proteins are termed cofactors or coactivators, whereas molecules that inhibit receptor proteins are termed corepressors.

In biochemistry, an oxidoreductase is an enzyme that catalyzes the transfer of electrons from one molecule to another.

For example, an enzyme that catalyzed this reaction would be an oxidoreductase: A– + B → A + B–. In this example, A is the reductant (electron donor) and B is the oxidant (electron acceptor).

ATP synthase is an important enzyme that provides energy for the cell to use through the synthesis of adenosine triphosphate.

Discuss the structure and function of ATP synthase, including the F1 and FO components

ATP synthase is an important enzyme that provides energy for the cell to use through the synthesis of adenosine triphosphate (ATP). ATP is the most commonly used “energy currency” of cells from most organisms. It is formed from adenosine diphosphate (ADP) and inorganic phosphate (Pi), and needs energy.

Energy is often released in the form of protium or H+, moving down an electrochemical gradient, such as from the lumen into the stroma of chloroplasts or from the inter-membrane space into the matrix in mitochondria. 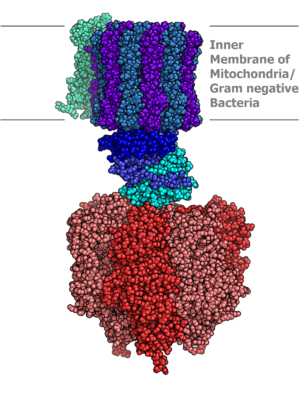 The nomenclature of the enzyme suffers from a long history. The F1 fraction derives its name from the term “Fraction 1” and FO (written as a subscript letter “o”, not “zero”) derives its name from being the oligomycin binding fraction. Oligomycin, an antibiotic, is able to inhibit the FO unit of ATP synthase.

F1- ATP Synthase structure: The F1 particle is large and can be seen in the transmission electron microscope by negative staining. These are particles of 9 nm diameter that pepper the inner mitochondrial membrane. They were originally called elementary particles and were thought to contain the entire respiratory apparatus of the mitochondrion, but, through a long series of experiments, Ephraim Racker and his colleagues (who first isolated the F1 particle in 1961) were able to show that this particle is correlated with ATPase activity in uncoupled mitochondria and with the ATPase activity in submitochondrial particles created by exposing mitochondria to ultrasound. This ATPase activity was further associated with the creation of ATP by a long series of experiments in many laboratories.

The FO region of ATP synthase is a proton pore that is embedded in the mitochondrial membrane. It consists of three main subunits A, B, and C, and (in humans) six additional subunits, d, e, f, g, F6, and 8 (or A6L).

Sodium Pumps as an Alternative to Proton Pumps

Most bacteria rely on proton motive force as a source of energy for a variety of cellular processes.

What Are Sodium Pumps?

Active transport is responsible for cells containing relatively high concentrations of potassium ions but low concentrations of sodium ions. The mechanism responsible for this is the sodium-potassium pump, which moves these two ions in opposite directions across the plasma membrane. This was investigated by following the passage of radioactively labeled ions across the plasma membrane of certain cells. It was found that the concentrations of sodium and potassium ions on the two sides of the membrane are interdependent, suggesting that the same carrier transports both ions. It is now known that the carrier is an ATP-ase and that it pumps three sodium ions out of the cell for every two potassium ions pumped in.

The sodium-potassium pump was discovered in the 1950s by Danish scientist Jens Christian Skou. It marked an important step in our understanding of how ions get into and out of cells, and has a particular significance for excitable cells like nervous cells, which depend on this pump for responding to stimuli and transmitting impulses.

Functions include resting potential, transport, controlling cell volume and acting as a signal transducer. The pump, while binding ATP, binds 3 intracellular Na+ ions. ATP is hydrolyzed, leading to phosphorylation of the pump at a highly conserved aspartate residue and subsequent release of ADP. A conformational change in the pump exposes the Na+ ions to the outside. The phosphorylated form of the pump has a low affinity for Na+ ions, so they are released.The pump binds 2 extracellular K+ ions. This causes the dephosphorylation of the pump, reverting it to its previous conformational state, transporting the K+ ions into the cell.The unphosphorylated form of the pump has a higher affinity for Na+ ions than K+ ions, so the two bound K+ ions are released. ATP binds, and the process starts again.

Most bacteria rely on proton motive force as a source of energy for a variety of cellular processes. Usually, an H+ cycle includes generation of the transmembrane electrochemical gradient of H+ (proton motive force) by primary transport systems (H+ pumps) and its use for ATP synthesis, solute transport, motility and reverse electron transport. A substantial body of evidence indicates, however, that certain extremophilic bacteria can use Na+ as a coupling ion in an Na+ cycle instead of, or in addition to, the H+ cycle. As in the H+ cycle, a fully operational Na+ cycle would include a primary Na+ pump that directly couples Na+ translocation to a chemical reaction, an Na+-transporting membrane ATP synthetase, a number of Na+-dependent membrane transporters, and an Na+-dependent flagellar motor. While certain Na+-dependent functions, like Na+-dependent uptake of melibiose, proline, and glutamate, have been observed in many bacteria, the ion gradients that served as energy sources for these transports have been generated by primary H+ pumps and converted to Na+ gradients by Na+/H+ antiporters.

One could think of several possible explanations for the widespread distribution of the elements of the Na+ cycle among pathogenic bacteria. First, Na+-based membrane energetics could improve the versatility of a pathogen by providing it with additional means of ATP synthesis, motility and solute uptake. This would improve its chances for colonization of the host cells and survival in the host organisms where defense mechanisms, including generation of superoxide radicals, impair the integrity of the bacterial membrane and decrease the levels of the proton motive force. Second, because Na+ concentrations in most natural environments are almost 106-fold higher than H+ concentrations, sodium motive force levels are unlikely to change as rapidly as proton motive force levels, making sodium motive force a much more reliable source of energy.