Microscopes allow for magnification and visualization of cells and cellular components that cannot be seen with the naked eye.

Cells vary in size. With few exceptions, individual cells cannot be seen with the naked eye, so scientists use microscopes (micro- = “small”; -scope = “to look at”) to study them. A microscope is an instrument that magnifies an object. Most photographs of cells are taken with a microscope; these images can also be called micrographs.

The optics of a microscope’s lenses change the orientation of the image that the user sees. A specimen that is right-side up and facing right on the microscope slide will appear upside-down and facing left when viewed through a microscope, and vice versa. Similarly, if the slide is moved left while looking through the microscope, it will appear to move right, and if moved down, it will seem to move up. This occurs because microscopes use two sets of lenses to magnify the image. Because of the manner by which light travels through the lenses, this system of two lenses produces an inverted image (binocular, or dissecting microscopes, work in a similar manner, but they include an additional magnification system that makes the final image appear to be upright).

Most student microscopes are classified as light microscopes. Visible light passes and is bent through the lens system to enable the user to see the specimen. Light microscopes are advantageous for viewing living organisms, but since individual cells are generally transparent, their components are not distinguishable unless they are colored with special stains. Staining, however, usually kills the cells. 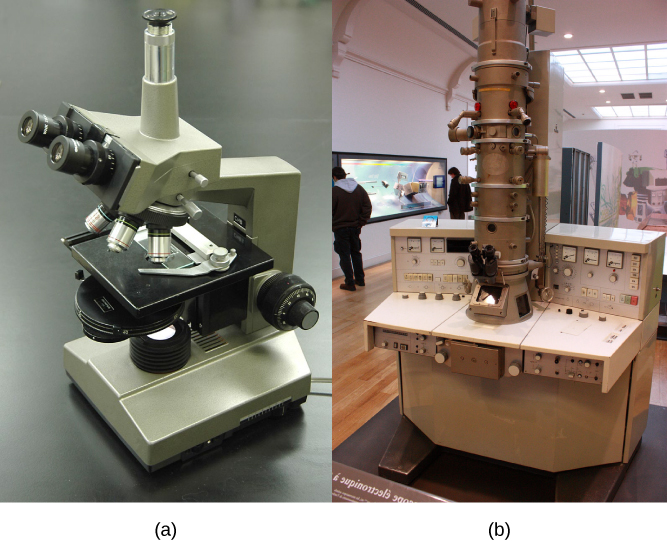 Light microscopes, commonly used in undergraduate college laboratories, magnify up to approximately 400 times. Two parameters that are important in microscopy are magnification and resolving power. Magnification is the process of enlarging an object in appearance. Resolving power is the ability of a microscope to distinguish two adjacent structures as separate: the higher the resolution, the better the clarity and detail of the image. When oil immersion lenses are used for the study of small objects, magnification is usually increased to 1,000 times. In order to gain a better understanding of cellular structure and function, scientists typically use electron microscopes.

Crystallographic analysis reveals the arrangement of atoms in solids that help build the three-dimensional model of molecules.

Crystallography is the scientific study of the arrangement of atoms in a solid. The field has greatly advanced with the development of x-ray diffraction methods, where the matter analyzed is usually in its crystal form. Nuclear magnetic resonance spectroscopy and x-ray crystallography have become the methods of choice for understanding three-dimensional protein structures. 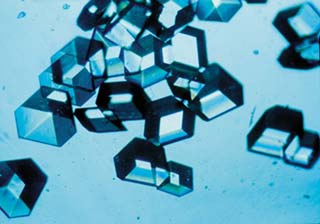 The Protein Data Bank (PDB) is a freely accessible repository documenting the structures of proteins and other biological macromolecules. It stores information about crystals and crystal structures. Computer programs like RasMol or Pymol can be used to visualize biological molecular structures.

Genetic analysis is a growing field in microbiology that provides information about specific adaptations and the evolution of organisms.

The study of microbial pathogens with genetic methods is a new and explosive field set to dominate microbiology in the next decade. Microbes provide an excellent starting point for genetic studies because they have a relatively simple genomic structure compared to higher, multicellular organisms.

Relationship between Bacteria and Plasmids

Bacteria obey the laws of genetics and the central dogma of life. DNA that carries genetic information is transcribed to RNA polypeptides, which are translated into protein. Viruses differ from other microbes as they can carry either DNA or RNA. Cell function depends on specific polypeptides, proteins, and enzymes encoded by genes. Bacterial chromosomes contain double stranded molecules of DNA arranged in a circular form called plasmids.

Plasmids are located in the cytoplasm of bacteria, are capable of autonomous replication, and transfer genes from parent cell to daughter cell. Bacteria possess extra chromosomal genetic elements that encode for antibiotic resistance, toxins, virulence determining genes, and reduced sensitivity to mutagens such as heavy metals. Plasmid profiling using molecular, biochemical, and microbial techniques is essential to understanding the mechanism of pathogenicity and to fuel genetic engineering.

Many of the techniques used to study whole genomes are conventional molecular biology techniques adapted to operate effectively with DNA in a much larger size range. Pulsed field gel electrophoresis (PFGE) is an adaptation of conventional agarose gel electrophoresis that allows extremely large DNA fragments to be resolved (up to megabase size fragments). PFGE is essential for estimating the sizes of whole genomes/chromosomes prior to sequencing and is necessary for preparing large DNA fragments for large insert DNA cloning and analysis of subsequent clones. It is a commonly used and extremely powerful tool for genotyping and epidemiology studies for pathogenic microorganisms. DNA cloning is another technique fundamental to molecular biology that requires adaptation in order to be useful in studying DNA at a whole genome scale.

There are two main approaches to sequencing microbial genomes – the ordered clone approach and direct shotgun sequencing both require large and small insert genomic DNA libraries in order to be effective.

Microarray hybridization is another technique used to characterize the dynamic nature of gene expression within a microbial cell. Microarray technology allows whole organism gene expression to be investigated. PCR products of every gene from a complete genome sequence are bound in a high-density array on a glass slide. These arrays are probed with fluorescently labeled cDNA prepared from whole RNA under specific environmental conditions. The level of cDNA is then quantified using high-resolution image scanners.

These techniques allow the identification of the genotype (i.e.-the genetic makeup) of a cell. Genotypic variations exist in microbes and these include mutations, gene transfer by transformation, conjugation, and transduction.

Mutation is random, undirected, heritable variation caused by alteration in nucleotide sequence at some point of DNA. Mutations can take the form of deletion, addition, or substitution of one or more bases. All genes are susceptible to mutations, but not all mutations are expressed. Genetic analysis of microbes allows the characterization of genes implicated in microbial pathogenesis.