The humoral immune response fights pathogens that are free in the bodily fluids, or “humours”. It relies on antigens (which are also often free in the humours) to detect these pathogens. An antigen is a biomolecule, such as a protein or sugar, that binds to a specific antibody. An antibody/antigen interaction may stimulate an immune response. Not every biomolecule is antigenic and not all antigens produce an immune response. B cells are the major cell type involved in the humoral immune response. When a foreign antigen (one coming from a pathogen, for example) is detected, B cells in the body that recognize that antigen will begin to produce antibodies as a means of fighting off the foreign invader.

During maturation, B cells gain antigen receptor molecules, termed B cell receptors (BCRs), which are displayed in large numbers, extracellularly on their membrane. These membrane-bound protein complexes contain antibodies, which enable specific antigen recognition. Each B cell initially produced has only one kind of antibody (antigen receptor), which makes every B cell unique. It is the immense number of B cells in the body, each of which produces a unique antibody, that allows the immune system to detect such a wide variety of pathogenic antigens. B cells containing antibodies that recognize “self” antigens are destroyed before they can mature, preventing the immune system from attacking the host. Once B cells mature in the bone marrow, they migrate to lymph nodes or other lymphatic organs, where they may begin to encounter pathogens. 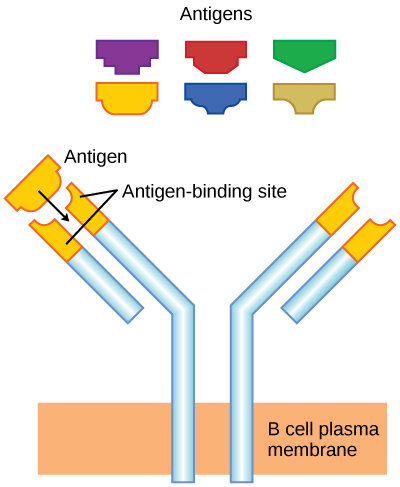 B cell receptors: B cell receptors, containing antibodies (termed antigen-binding site in the picture) are embedded in the membranes of B cells and bind a variety of antigens through their variable regions.

When a B cell encounters the antigen that binds to its receptor, the antigen molecule is brought into the cell by endocytosis, reappearing on the surface of the cell bound to an MHC class II molecule. When this process is complete, the B cell is sensitized. In most cases, the sensitized B cell must then encounter a specific kind of T cell, called a helper T cell, before it is activated. This activation of the helper T cell occurs when a dendritic cell presents an antigen on its MHC II molecule, allowing the T cell to recognize it and mature.

The helper T cell binds to the antigen-MHC class II complex and is induced to release cytokines that induce the B cell to divide rapidly, making thousands of identical (clonal) cells. These daughter cells become either plasma cells or memory B cells. The memory B cells remain inactive at this point. A later encounter with the antigen, caused by a reinfection by the same bacteria or virus, will result in them dividing into a new population of plasma cells. The plasma cells, on the other hand, produce and secrete large quantities, up to 100 million molecules per hour, of antibody molecules. An antibody, also known as an immunoglobulin (Ig), is a protein that is produced by plasma cells after stimulation by an antigen. Antibodies are the agents of humoral immunity. Antibodies occur in the blood, in gastric and mucus secretions, and in breast milk. Antibodies in these bodily fluids can bind pathogens and mark them for destruction by phagocytes before they are able to infect cells. 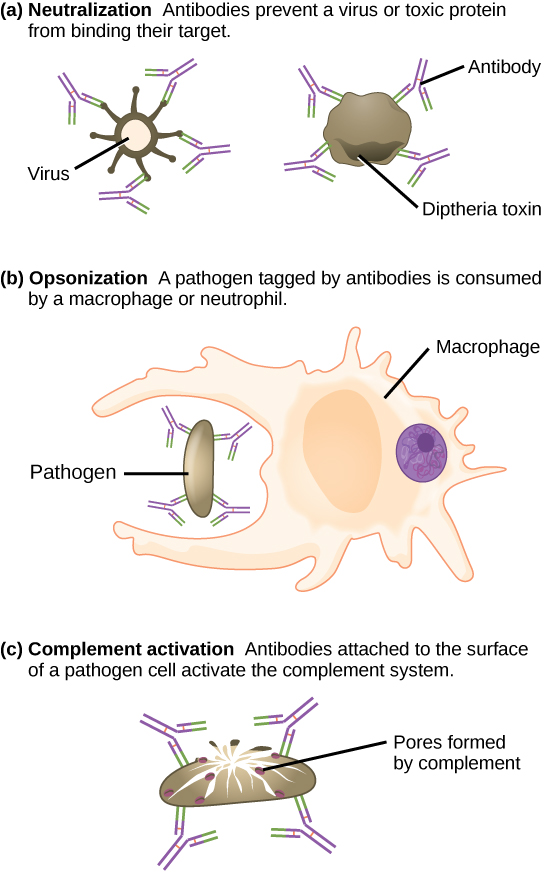 Methods by which antibodies inhibit infection: Antibodies may inhibit infection by (a) preventing the antigen from binding its target, (b) tagging a pathogen for destruction by macrophages or neutrophils, or (c) activating the complement cascade.

These antibodies circulate in the blood stream and lymphatic system, binding with the antigen whenever it is encountered. The binding can fight infection in several ways. Antibodies can bind to viruses or bacteria, which interferes with the chemical interactions required for them to infect or bind to other cells. The antibodies may create bridges between different particles containing antigenic sites, clumping them all together and preventing their proper functioning. Antibody neutralization can prevent pathogens from entering and infecting host cells. The neutralized antibody-coated pathogens can then be filtered by the spleen to be eliminated in urine or feces. The antigen-antibody complex stimulates the complement system described previously, destroying the cell bearing the antigen. Antibodies also opsonize pathogen cells, wherein they mark them for destruction by phagocytic cells, such as macrophages or neutrophils. Additionally, antibodies stimulate inflammation, while their presence in mucus and on the skin prevents pathogen attack.

The production of antibodies by plasma cells in response to an antigen is called active immunity. This describes the host’s active response of the immune system to an infection or to a vaccination. There is also a passive immune response wherein antibodies are introduced into the host from an outside source, instead of the individual’s own plasma cells. For example, antibodies circulating in a pregnant woman’s body move across the placenta into the developing fetus. The child benefits from the presence of these antibodies for up to several months after birth. In addition, a passive immune response is possible by injecting antibodies into an individual in the form of an antivenom to a snake-bite toxin or antibodies in blood serum to help fight a hepatitis infection, giving immediate relief.

Development of the Dual Lymphocyte System

Lymphocytes originate from a common progenitor in a process known as hematopoeisis.

The cells of the adaptive immune system are a type of leukocyte, called a lymphocyte. The human body has about 2 trillion lymphocytes, constituting 20-40% of white blood cells (WBCs); their total mass is about the same as the brain or liver. The peripheral blood contains 20–50% of circulating lymphocytes; the rest move within the lymphatic system. B cells and T cells are the major types of lymphocytes.

B Cell and T Cell Differentiation

Mammalian stem cells differentiate into several kinds of blood cell within the bone marrow. This process is called haematopoiesis. During this process, all lymphocytes originate from a common lymphoid progenitor before differentiating into their distinct lymphocyte types. The differentiation of lymphocytes into distinguishable types follows various pathways in a hierarchical fashion as well as in a more plastic fashion. The formation of lymphocytes is known as lymphopoiesis. B cells mature into B lymphocytes in the bone marrow, while T cells migrate to, and mature in, a distinct organ called the thymus. Following maturation, the lymphocytes enter the circulation and peripheral lymphoid organs (e.g. the spleen and lymph nodes) where they survey for invading pathogens and/or tumor cells. 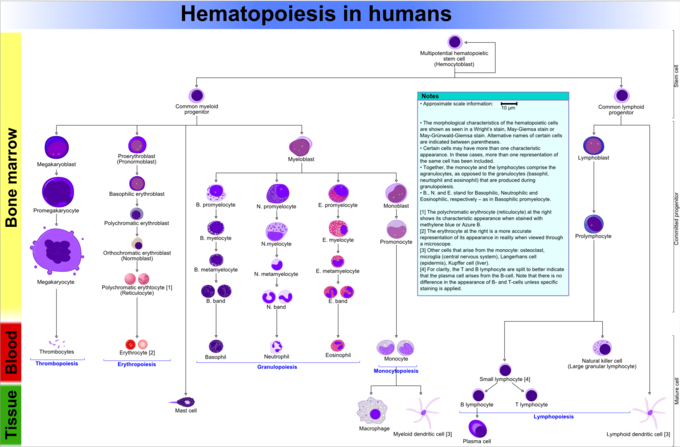 Hematopoeisis in humans: Mammalian stem cells differentiate into several kinds of blood cell within the bone marrow. This process is called haematopoiesis. All lymphocytes originate during this process from a common lymphoid progenitor before differentiating into their distinct lymphocyte types.

The lymphocytes involved in adaptive immunity (i.e. B and T cells) differentiate further after exposure to an antigen; they form effector and memory lymphocytes. Effector lymphocytes function to eliminate the antigen, either by releasing antibodies (in the case of B cells), cytotoxic granules (cytotoxic T cells) or by signaling to other cells of the immune system (helper T cells). Memory cells remain in the peripheral tissues and circulation for an extended time ready to respond to the same antigen upon future exposure.