Genetic engineering can be used to manufacture new vaccines.

Genetic engineering, also called genetic modification, is the direct manipulation of an organism ‘s genome using biotechnology. New DNA may be inserted in the host genome by first isolating and copying the genetic material of interest using molecular cloning methods to generate a DNA sequence, or by synthesizing the DNA and then inserting this construct into the host organism. Genes may be removed, or “knocked out,” using a nuclease. Gene targeting is a different technique that uses homologous recombination to change an endogenous gene, and can be used to delete a gene, remove exons, add a gene, or introduce point mutations.

Genetic engineering alters the genetic makeup of an organism using techniques that remove heritable material, or that introduce DNA prepared outside the organism either directly into the host or into a cell that is then fused or hybridized with the host. This involves using recombinant nucleic acid (DNA or RNA) techniques to form new combinations of heritable genetic material, followed by the incorporation of that material either indirectly through a vector system or directly through micro-injection, macro-injection and micro-encapsulation techniques.

In medicine, genetic engineering has been used to mass-produce insulin, human growth hormones, follistim (for treating infertility), human albumin, monoclonal antibodies, antihemophilic factors, vaccines,and many other drugs. Vaccination generally involves injecting weak live, killed, or inactivated forms of viruses or their toxins into the person being immunized. Genetically engineered viruses are being developed that can still confer immunity, but lack the infectious sequences. Mouse hybridomas, cells fused together to create monoclonal antibodies have been humanised through genetic engineering to create human monoclonal antibodies. 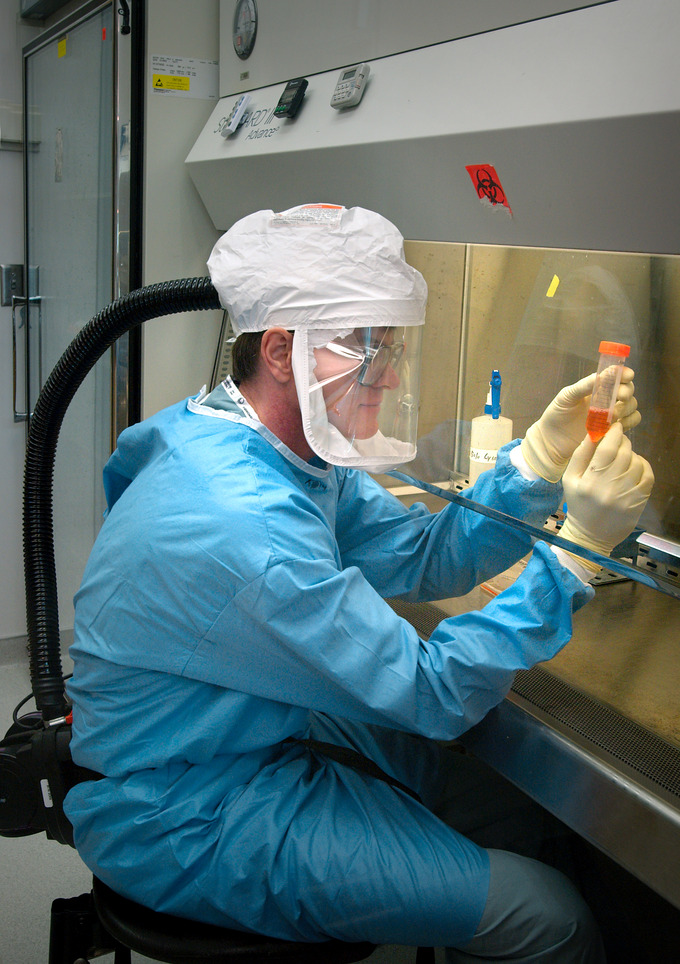 The process of genetic engineering involves splicing an area of a chromosome, a gene, that controls a certain characteristic of the body. The enzyme endonuclease is used to split a DNA sequence and to split the gene from the rest of the chromosome. For example, this gene may be programmed to produce an antiviral protein. This gene is removed and can be placed into another organism. For example, it can be placed into a bacteria, where it is sealed into the DNA chain using ligase. When the chromosome is once again sealed, the bacteria is now effectively re-programmed to replicate this new antiviral protein. The bacteria can continue to live a healthy life, though genetic engineering and human intervention has actively manipulated what the bacteria actually is.

Despite the early success demonstrated with the hepatitis B vaccine, no other recombinant engineered vaccine has been approved for use in humans. It is unlikely that a recombinant vaccine will be developed to replace an existing licensed human vaccine with a proven record of safety and efficacy. This is due to the economic reality of making vaccines for human use. Genetically engineered subunit vaccines are more costly to manufacture than conventional vaccines, since the antigen must be purified to a higher standard than was demanded of older, conventional vaccines. Each vaccine must also be subjected to extensive testing and review by the FDA, as it would be considered a new product. This is costly to a company in terms of both time and money and is unnecessary if a licensed product is already on the market. Although recombinant subunit vaccines hold great promise, they do present some potential limitations.

In addition to being less reactogenic, recombinant subunit vaccines have a tendency to be less immunogenic than their conventional counterparts. This can be attributed to these vaccines being held to a higher degree of purity than was traditionally done for an earlier generation of licensed subunit vaccines. Ironically, the contaminants often found in conventional subunit vaccines may have aided in the inflammatory process, which is essential for initiating a vigorous immune response. This potential problem may be overcome by employing one of the many new types of adjuvants that are becoming available for use in humans. Recombinant subunit vaccines may also suffer from being too well-defined, because they are composed of a single antigen. In contrast, conventional vaccines contain trace amounts of other antigens that may aid in conferring an immunity to infectious agents that is more solid than could be provided by a monovalent vaccine. This problem can be minimized, where necessary, by creating recombinant vaccines that are composed of multiple antigens from the same pathogen.

The purpose of genetic engineering in animals is to create animals with special characteristics.

Scientists are now capable of creating new species of animals by taking genetic material from one, or more, plants or animals, and genetically engineering them into the genes of another animal. This allows scientists to create animals that are completely foreign to the earth and specifically tailored to possess only the traits that humans desire in animals. This means that science can engineer farm animals to grow faster, have healthier meat and flesh, and be less able to feel the pain and suffering often associated with the conditions present in modern factory farms.

Genetically engineered animals are also created to help medical researchers in their quest to find cures for genetic disease, like breast cancer. Finally, endangered animal species can be cloned, thus helping wildlife management in its goals of preserving wild populations of the earth’s biological diversity, and by ensuring that endangered animals’ genetic information will not be lost when the last of the species dies.

This use of modern technology is not without its drawbacks or its critics. By genetically engineering farm and research animals, critics argue, we may be undoing what nature has worked to create over millions of years. Natural animals are specifically adapted to a given environment and when science manipulates the genes of a few species in the ecosystem, the entire balance of the ecosystem might fall completely apart and cause an unknown number of natural animal species to grow extinct.

Others argue that animals should possess, at a bare minimum, the right to be free of genetic manipulation or a reduction in their natural abilities. Despite this debate, the law in both the United States and in Europe, tends to support genetic engineering research and development by allowing genetically engineered animals to be patented. Patents give scientists a monopoly over their genetically engineered animal species, something before unheard of in modern economic systems. Typically, animals could be owned, but never entire species.

From manipulation of mutant genes to enhanced resistance to disease, biotechnology has allowed advances in medicine.

Give examples of how biotechnology is used in medicine.

Pharmacogenomics is the study of how the genetic inheritance of an individual affects his/her body’s response to drugs. It is a coined word derived from the words “pharmacology” and ” genomics “. It is, therefore, the study of the relationship between pharmaceuticals and genetics. The vision of pharmacogenomics is to be able to design and produce drugs that are adapted to each person’s genetic makeup. Pharmacogenomics results in the following benefits:

1. Development of tailor-made medicines. Using pharmacogenomics, pharmaceutical companies can create drugs based on the proteins, enzymes, and RNA molecules that are associated with specific genes and diseases. These tailor-made drugs promise not only to maximize therapeutic effects, but also to decrease damage to nearby healthy cells.

2. More accurate methods of determining appropriate drug dosages. Knowing a patient’s genetics will enable doctors to determine how well the patient’s body can process and metabolize a medicine. This will maximize the value of the medicine and decrease the likelihood of overdose.

3. Improvements in the drug discovery and approval process. The discovery of potential therapies will be made easier using genome targets. Genes have been associated with numerous diseases and disorders. With modern biotechnology, these genes can be used as targets for the development of effective new therapies, which could significantly shorten the drug discovery process.

4. Better vaccines. Safer vaccines can be designed and produced by organisms transformed by means of genetic engineering. These vaccines will elicit the immune response without the attendant risks of infection. They will be inexpensive, stable, easy to store, and capable of being engineered to carry several strains of pathogen at once.

Modern biotechnology can be used to manufacture existing drugs more easily and cheaply. The first genetically-engineered products were medicines designed to combat human diseases. In 1978, Genentech joined a gene for insulin with a plasmid vector and put the resulting gene into a bacterium called Escherichia coli. Insulin, widely used for the treatment of diabetes, was previously extracted from sheep and pigs. It was very expensive and often elicited unwanted allergic responses. The resulting genetically-engineered bacterium enabled the production of vast quantities of human insulin at low cost. Since then, modern biotechnology has made it possible to produce more easily and cheaply the human growth hormone, clotting factors for hemophiliacs, fertility drugs, erythropoietin, and other drugs. Genomic knowledge of the genes involved in diseases, disease pathways, and drug-response sites are expected to lead to the discovery of thousands more new targets.

The process of testing for suspected genetic defects before administering treatment is called genetic diagnosis by genetic testing. Depending on the inheritance patterns of a disease-causing gene, family members are advised to undergo genetic testing. Treatment plans are based on the findings of genetic tests that determine the type of cancer. If the cancer is caused by inherited gene mutations, other female relatives are also advised to undergo genetic testing and periodic screening for breast cancer. Genetic testing is also offered for fetuses to determine the presence or absence of disease-causing genes in families with specific, debilitating diseases.

Genetic testing involves the direct examination of the DNA molecule itself. A scientist scans a patient’s DNA sample for mutated sequences. There are two major types of gene tests. In the first type, a researcher may design short pieces of DNA whose sequences are complementary to the mutated sequences. These probes will seek their complement among the base pairs of an individual’s genome. If the mutated sequence is present in the patient’s genome, the probe will bind to it and flag the mutation. In the second type, a researcher may conduct the gene test by comparing the sequence of DNA bases in a patient’s gene to a normal version of the gene.

Gene therapy is a genetic engineering technique used to cure disease. In its simplest form, it involves the introduction of a good gene at a random location in the genome to aid the cure of a disease that is caused by a mutated gene. The good gene is usually introduced into diseased cells as part of a vector transmitted by a virus that can infect the host cell and deliver the foreign DNA. More advanced forms of gene therapy try to correct the mutation at the original site in the genome, such as is the case with treatment of severe combined immunodeficiency (SCID). 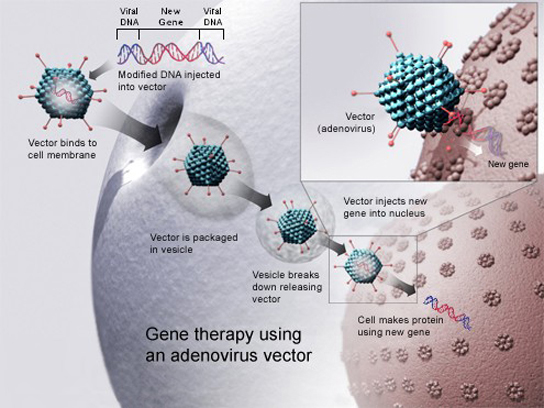 Gene Therapy: Gene therapy using an adenovirus vector can be used to cure certain genetic diseases in which a person has a defective gene.