Photoautotrophs and photoheterotrophs are organisms that rely on light as their source of energy to carry out cellular processes.

Phototrophs are organisms that use light as their source of energy to produce ATP and carry out various cellular processes. Not all phototrophs are photosynthetic but they all constitute a food source for heterotrophic organisms. All phototrophs either use electron transport chain or direct proton pumping to establish an electro-chemical gradient utilized by ATP synthase to provide molecular energy for the cell. Phototrophs can be of two types based on their metabolism. 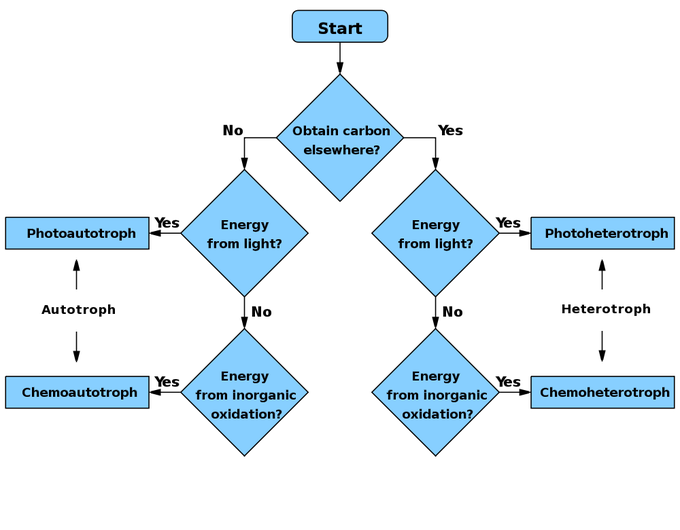 An autotroph is an organism able to make its own food. Photoautotrophs are organisms that carry out photosynthesis. Using energy from sunlight, carbon dioxide and water are converted into organic materials to be used in cellular functions such as biosynthesis and respiration. In an ecological context, they provide nutrition for all other forms of life (besides other autotrophs such as chemotrophs ). In terrestrial environments plants are the predominant variety, while aquatic environments include a range of phototrophic organisms such as algae, protists, and bacteria. In photosynthetic bacteria and cyanobacteria that build up carbon dioxide and water into organic cell materials using energy from sunlight, starch is produced as final product. This process is an essential storage form of carbon, which can be used when light conditions are too poor to satisfy the immediate needs of the organism.

A heterotroph is an organism that depends on organic matter already produced by other organisms for its nourishment. Photoheterotrophs obtain their energy from sunlight and carbon from organic material and not carbon dioxide. Most of the well-recognized phototrophs are autotrophs, also known as photoautotrophs, and can fix carbon. They can be contrasted with chemotrophs that obtain their energy by the oxidation of electron donors in their environments. Photoheterotrophs produce ATP through photophosphorylation but use environmentally obtained organic compounds to build structures and other bio-molecules. Photoautotrophic organisms are sometimes referred to as holophytic.

Chemoautotrophs and chemoheterotrophs make their food using chemical energy rather than solar energy.

Chemotrophs are a class of organisms that obtain their energy through the oxidation of inorganic molecules, such as iron and magnesium. The most common type of chemotrophic organisms are prokaryotic and include both bacteria and fungi. All of these organisms require carbon to survive and reproduce. The ability of chemotrophs to produce their own organic or carbon-containing molecules differentiates these organisms into two different classifications–chemoautotrophs and chemoheterotrophs. 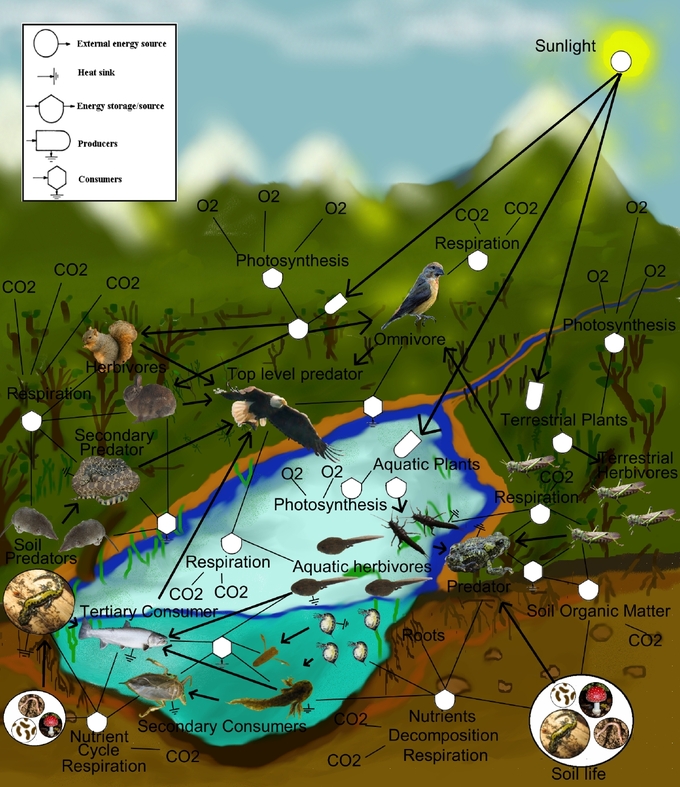 Organismal and environmental interactions in a wetland: sources of energy and carbon for each trophic level.

Chemoheterotrophs, unlike chemoautotrophs, are unable to synthesize their own organic molecules. Instead, these organisms must ingest preformed carbon molecules, such as carbohydrates and lipids, synthesized by other organisms. They do, however, still obtain energy from the oxidation of inorganic molecules like the chemoautotrophs. Chemoheterotrophs are only able to thrive in environments that are capable of sustaining other forms of life due to their dependence on these organisms for carbon sources. Chemoheterotrophs are the most abundant type of chemotrophic organisms and include most bacteria, fungi and protozoa.