Viruses can cause cancer by transforming a normal cell into a malignant cell.

Worldwide, cancer viruses are estimated to cause 15-20% of all cancers in humans. Most viral infections, however, do not lead to tumor formation; several factors influence the progression from viral infection to cancer development. These factors include host’s genetic makeup, mutation occurrence, exposure to cancer causing agents, and immune impairment.

Viruses typically initiate cancer development by suppressing the host’s immune system, causing inflammation over a long period of time, or by altering host genes. Cancer cells have characteristics that differ from normal cells, such as acquiring the ability to grow uncontrollably. This can result from having control of their own growth signals, losing sensitivity to anti-growth signals, and losing the ability to undergo apoptosis, or programmed cell death.

Cancer cells don’t experience biological aging, and maintain their ability to undergo cell division and growth. Transformation occurs when a virus infects and genetically alters a cell. The infected cell is regulated by the viral genes and has the ability to undergo abnormal new growth. Scientists have been able to discern some commonality among viruses that cause tumors. The tumor viruses or oncoviruses change cells by integrating their genetic material with the host cell’s DNA. Unlike the integration seen in prophages, this is a permanent insertion; the genetic material is never removed.

Mutations Leading to Increased Cell Division: Cancer is caused by a series of mutations. Viral infections contribute to the process through genetic alteration.

An estimated 15 percent of all human cancers worldwide may be attributed to viruses.

There are two classes of cancer viruses: DNA and RNA viruses. Several viruses have been linked to certain types of cancer in humans. These viruses have varying ways of reproduction and represent several different virus families. 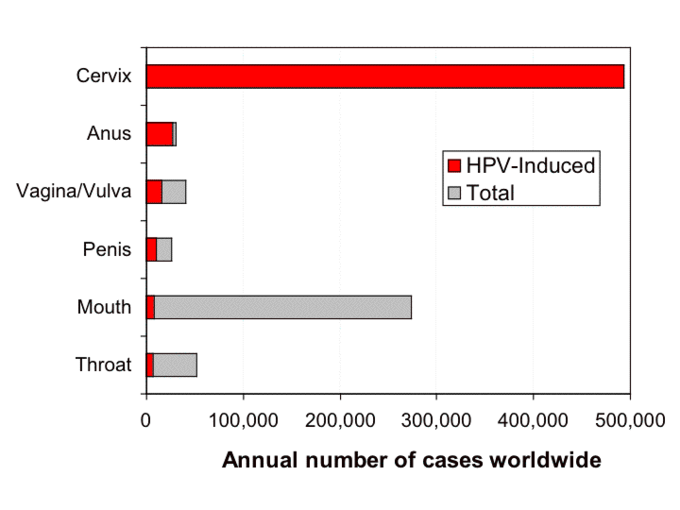 Virus Causing Cervical Cancer: Human papilloma virus is strongly linked to the development of cervical cancer among other types of cancers.

DNA Oncogenic Viruses include the following:

DNA tumor viruses have two life-styles. In permissive cells, all parts of the viral genome are expressed. This leads to viral replication, cell lysis and cell death. In cells that are non-permissive for replication, viral DNA is usually, but not always, integrated into the cell chromosomes at random sites. Only part of the viral genome is expressed. These are the early control functions of the virus. Viral structural proteins are not made, and no progeny virus is released.

The first DNA tumor viruses to be discovered were rabbit fibroma virus and Shope papilloma virus, both discovered by Richard Shope in the 1930s. Papillomas are benign growths, such as warts, of epithelial cells. They were discovered by making a filtered extract of a tumor from a wild rabbit and injecting the filtrate into another rabbit in which a benign papilloma grew. However, when the filtrate was injected into a domestic rabbit, the result was a carcinoma, a malignant growth. A seminal observation was that it was no longer possible to isolate infectious virus from the malignant growth because the virus had become integrated into the chromosomes of the malignant cells.

An estimated 15% of all human cancers worldwide may be attributed to viruses.

Classify the viruses with oncogenic properties

There are two classes of cancer viruses: DNA and RNA viruses. Several viruses have been linked to certain types of cancer in humans. These viruses have varying ways of reproduction and represent several different virus families. Specifically, RNA viruses have RNA as their genetic material and can be either single-stranded RNA (ssRNA) or double-stranded (dsRNA). RNA viruses are classified based on the Baltimore classification system and do not take into account viruses with DNA intermediates in their life cycle. Viruses which contain RNA for their genetic material but do include DNA intermediates in their life cycle are called “retroviruses. ” There are numerous RNA oncogenic viruses that have been linked to various cancer types. These various oncogenic viruses include: 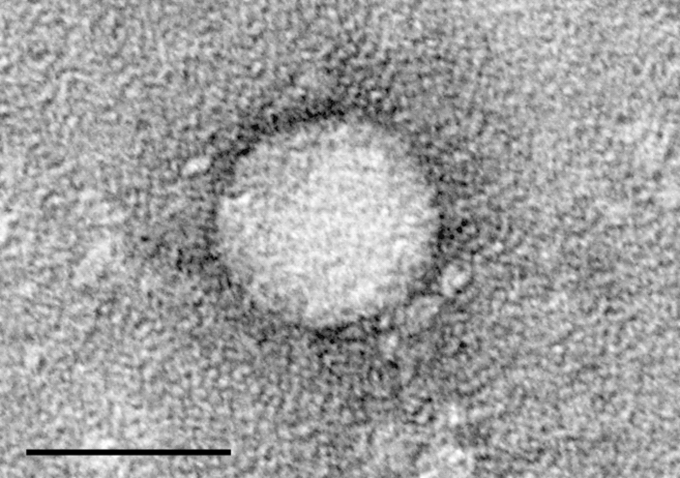 Electron micrograph of Hepatitis C: Hepatitis C viral infections have been linked to the development of liver cancer.

2. Hepatitis viruses includes hepatitis B and hepatitis C have been linked to hepatocellular carcinoma.

3. Human papillomaviruses (HPV) have been linked to cancer of the cervix, anus, penis, vagina/vulva, and some cancers of the head and neck.

Retroviruses are different from DNA tumor viruses in that their genome is RNA, but they are similar to many DNA tumor viruses in that the genome is integrated into host genome. Since RNA makes up the genome of the mature virus particle, it must be copied to DNA prior to integration into the host cell chromosome. This lifestyle goes against the central dogma of molecular biology in which that DNA is copied into RNA. The outer envelope comes from the host cell plasma membrane. Coat proteins (surface antigens) are encoded by env (envelope) gene and are glycosylated. One primary gene product is made, but this is cleaved so that there are more than one surface glycoprotein in the mature virus (cleavage is by host enzyme in the Golgi apparatus). The primary protein (before cleavage) is made on ribosomes attached to the endoplasmic reticulum and is a transmembrane (type 1) protein. Inside the membrane is an icosahedral capsid containing proteins encoded by the gag gene (group-specific AntiGen). Gag-encoded proteins also coat the genomic RNA. Again, there is one primary gene product. This is cleaved by a virally-encoded protease (from the pol gene). There are two molecules of genomic RNA per virus particle with a 5′ cap and a 3′ poly A sequence. Thus, the virus is diploid. The RNA is plus sense (same sense as mRNA). About 10 copies of reverse transcriptase are present within the mature virus, these are encoded by the pol gene. Pol gene codes for several functions (again, as with gag and env, a polyprotein is made that is then cut up).