The graphical representation of acceleration over time can be derived through the graph of an object’s position over time.

In physics, acceleration is the rate at which the velocity of a body changes with time. It is a vector quantity with both magnitude and direction. Acceleration is accompanied by a force, as described by Newton’s Second Law; the force, as a vector, is the product of the mass of the object being accelerated and the acceleration (vector), or [latex]\text{F}=\text{ma}[/latex]. The SI unit of acceleration is the meter per second squared: [latex]\displaystyle \frac{\text{m}}{\text{s}^2}[/latex] 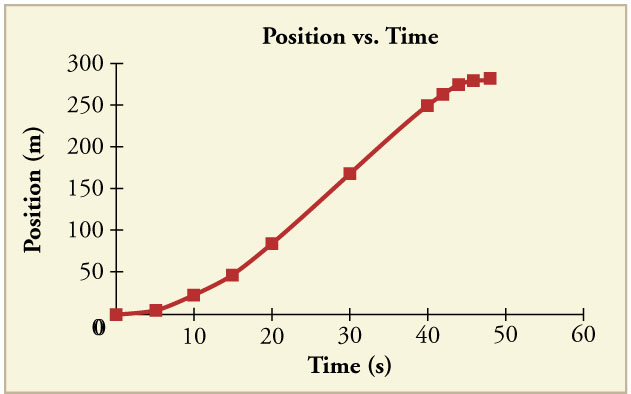 This shows the velocity of the object over time. The object’s velocity increases in the beginning as it accelerates at the beginning, then remains constant in the middle before it slows down toward the end. Notice that this graph is a representation of the slope of the previous position vs time graph. From this graph, we can further derive an acceleration vs time graph. 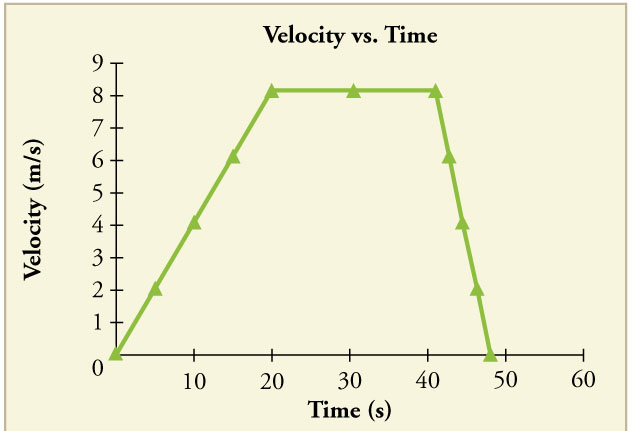 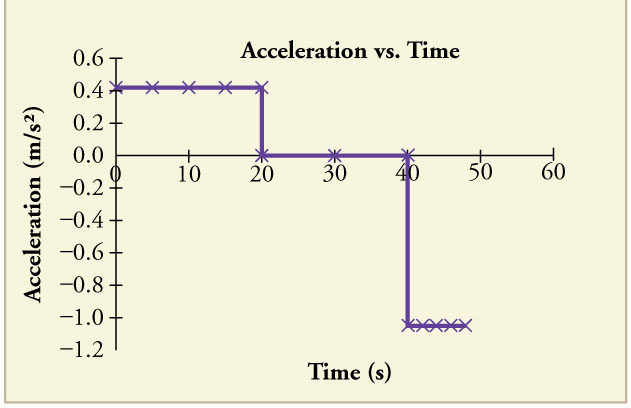 Constant acceleration occurs when an object’s velocity changes by an equal amount in every equal time period.

Describe how constant acceleration affects the motion of an object

One-Dimensional Motion: When you drop an object, it falls vertically toward the center of the earth due to the constant acceleration of gravity.

An object experiencing constant acceleration has a velocity that increases or decreases by an equal amount for any constant period of time. Acceleration can be derived easily from basic kinematic principles. It is defined as the first time derivative of velocity (so the second derivative of position with respect to time):

Assuming acceleration to be constant does not seriously limit the situations we can study and does not degrade the accuracy of our treatment, because in a great number of situations, acceleration is constant. When it is not, we can either consider it in separate parts of constant acceleration or use an average acceleration over a period of time.

The motion of falling objects is a simple, one-dimensional type of projectile motion in which there is no horizontal movement. For example, if you held a rock out and dropped it, the rock would fall only vertically downward toward the earth. If you were to throw the rock instead of just dropping it, it would follow a more projectile-like pattern, similar to the one a kicked ball follows.

Constant Acceleration Explained with Vectors and Algebra: This video answers the question “what is acceleration? “.