We have seen that under certain circumstances particles behave like waves. This idea is used in the electron microscope which is a type that uses electrons to create an image of the target. It has much higher magnification or resolving power than a normal light microscope. It can achieve better than 50 pm resolution and magnifications of up to about 10,000,000 times, whereas ordinary, nonconfocal light microscopes are limited by diffraction to about 200 nm resolution and useful magnifications below 2000 times. 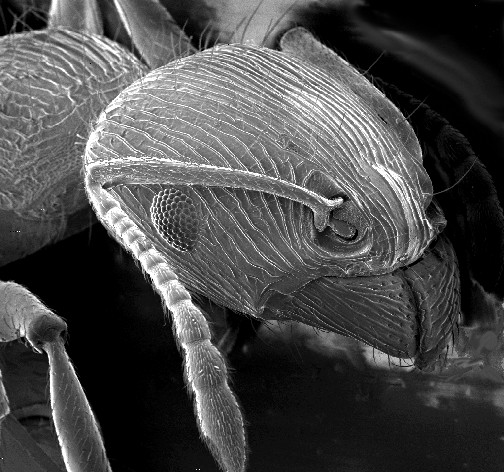 Electron Microscope Image: An image of an ant in a scanning electron microscope.

Let’s first review how a regular optical microscope works. A beam of light is shone through a thin target and the image is then magnified and focused using objective and ocular lenses. The amount of light which passes through the target depends on its densities, since the less dense regions allow more light to pass through than the denser regions. This means that the beam of light which is partially transmitted through the target carries information about the inner structure of the target. 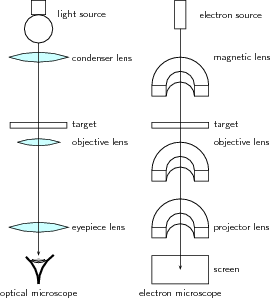 Optical and Electron Microscopes: Diagram of the basic components of an optical microscope and an electron microscope.

The spatial variation in this information (the “image”) is then magnified by a series of magnetic lenses and it is recorded by hitting a fluorescent screen, photographic plate, or light-sensitive sensor such as a CCD (charge-coupled device) camera. The image detected by the CCD may be displayed in real time on a monitor or computer.

Electron microscopes are very useful as they are able to magnify objects to a much higher resolution. This is because their de Broglie wavelengths are so much smaller than that of visible light. You hopefully remember that light is diffracted by objects which are separated by a distance of about the same size as the wavelength of the light. This diffraction then prevents you from being able to focus the transmitted light into an image.

Therefore, the sizes at which diffraction occurs for a beam of electrons is much smaller than those for visible light. This is why you can magnify targets to a much higher order of magnification using electrons rather than visible light.

A laser consists of a gain medium, a mechanism to supply energy to it, and something to provide optical feedback.

When lasers were invented in 1960, they were called “a solution looking for a problem. ” Nowadays, lasers are ubiquitous, finding utility in thousands of highly varied applications in every section of modern society, including consumer electronics, information technology, science, medicine, industry, law enforcement, entertainment, and the military.

Having examined stimulated emission and optical amplification process in the “Lasers, Applications of Quantum Mechanics” section, this atom looks at how lasers are built.

The gain medium is where the optical amplification process occurs. It is excited by an external source of energy into an excited state (called “population inversion”), ready to be fired when a photon with the right frequency enters the medium. In most lasers, this medium consists of a population of atoms which have been excited by an outside light source or an electrical field which supplies energy for atoms to absorb in order to be transformed into excited states. There are many types of lasers depending on the gain media and mode of operation. Gas and semiconductors are commonly used gain media.

Wavelengths of Commercially Available Lasers: Laser types with distinct laser lines are shown above the wavelength bar, while below are shown lasers that can emit in a wavelength range. The height of the lines and bars gives an indication of the maximal power/pulse energy commercially available, while the color codifies the type of laser material.

The most common type of laser uses feedback from an optical cavity–a pair of highly reflective mirrors on either end of the gain medium. A single photon can bounce back and forth between the mirrors many times, passing through the gain medium and being amplified each time. Typically one of the two mirrors, the output coupler, is partially transparent. Some of the light escapes through this mirror, producing a laser beam that is visible to the naked eye.