Applications of Induction and EM Waves

Inductance is used in the operation of many modern devices, such as speakers, memory, seismographs and GRCIs.

Discuss the use of inductance in modern devices

Inductors have many uses in modern electronics. In a sound system, sound can be transmitted from a microphone to a speaker (shown in ). The microphone works by induction, as the vibrating membrane induces an emf in a coil. That “signal” is then transmitted to an amplifier and then to a speaker. The speaker is then driven by modulated electrical currents (produced by an amplifier) that pass through and magnetize (by inductance) a speaker coil of copper wire, creating a magnetic field. Thus, the electrical current variations that pass through the speaker are converted to varying magnetic forces, which move the speaker diaphragm, forcing the driver to produce air motion that is similar to the original signal from the amplifier.

A simple, modern speaker.: A speaker with magnet and coils that is used to produce sound.

Inductance in modern electronics is also used in computer memory. Magnetic storage uses different patterns of magnetization on a magnetically coated surface to store information. Differently magnetized areas on tape (or disk) induce signals on “read-write” heads, from which the information is later accessed.

Another application is the seismograph—an instrument for detecting and recording the intensity, direction and duration of ground movement. It contains a fixed coil and a magnet hung on a spring (or vice versa). These “record” the current induced when the Earth shakes.

A ground fault circuit interrupter (GFCI) provides additional safety (that circuit breakers cannot) by stopping the current in a shorted-out circuit. This is done by inductance. If a GFCI detects that there is a leakage of current, it produces an EMF and a current in the opposite direction of the original current.

An antenna is a device that converts electric power into radio waves, and vice versa.

Describe functions and uses of antennae

Maxwell’s equations predicted that all light waves have the same structure, regardless of wavelength and frequency. As a consequence, visible light and radio waves should share common characteristics. Maxwell’s 1865 prediction passed an important test in 1888, when Heinrich Hertz published the results of experiments in which he showed that radio waves could be manipulated in the same ways as visible light waves. To aid in his experiment, Hertz built the first antenna. 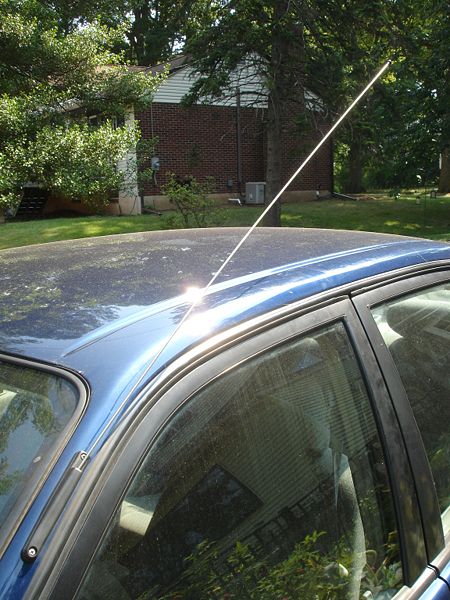 Car Antenna: A common car antenna that converts electric power in the air into electromagnetic waves.

An antenna (or aerial) is an electrical device that converts electric power into radio waves, and vice versa. Usually, it is used with a radio transmitter or radio receiver. In transmission, a radio transmitter supplies an oscillating radio frequency electric current to the antenna’s terminals, and the antenna radiates the energy from the current as electromagnetic waves (radio waves). In reception, an antenna intercepts some of the power of an electromagnetic wave in order to produce a tiny voltage at its terminals. This voltage is applied to a receiver to be amplified.

Antennas may also include reflective or directive elements or surfaces not connected to the transmitter or receiver, such as parasitic elements, parabolic reflectors, or horns. These serve to direct the radio waves into a beam or other desired radiation pattern. Antennas can be designed to transmit or receive radio waves in all directions equally (omnidirectional antennas), or transmit them in a beam in a particular direction and receive from that one direction only (directional or high gain antennas).