Explain why magnetic field is utilized in mass spectrometers

Mass spectrometry (MS) is the art of displaying the spectra (singular spectrum) of the masses of a sample of material. It is used for determining the elemental composition of a sample, and properties of the particles and molecules (the chemical structures of molecules, such as peptides and other chemical compounds). 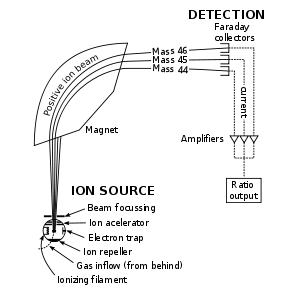 Schematic of Mass Spectrometer: Schematics of a simple mass spectrometer with sector type mass analyzer. This one is for the measurement of carbon dioxide isotope ratios as in the carbon-13urea breath test.

Mass spectrometers, as diagramed in, separate compounds based on a property known as the mass-to-charge ratio. The sample to be identified is first ionized, and then passed through some form of magnetic field. Based on parameters, such as how long it takes the molecule to travel a certain distance or the amount of deflection caused by the field, a mass can be calculated for the ion.

First, the sample undergoes vaporization by intense heat. The gaseous components of the sample are each ionized (turned into ions) with the same quantity of charge. The ions are then grouped by applying a similar magnetic force to each. Since the acceleration of a charge is dependent on the mass and strength of the charge, a lighter mass-to-charge ratio will not travel as far as a high mass-to-charge ratio, allowing for comparison of the physical properties of different particles. The groupings are detected by some quantitative signal from of ongoing probing. The detector differentiates the ions based on how far they curve in the magnetic field. The signal is processed into the spectra (singular of spectrum) of the masses of the particles of that sample. The elements or molecules are uniquely identified by correlating known masses by the identified masses.

Ferromagnetism is the property of certain materials that enables them to form magnets and be attracted to magnets.

Relate ferromagnetism with the electron configuration

Ferromagnetism is the basic mechanism by which certain materials (such as iron) form permanent magnets, or are attracted to magnets. In physics, several different types of magnetism are distinguished. Ferromagnetism is the strongest type—it is the only type that creates forces strong enough to be felt, and is responsible for the common phenomena of magnetism encountered in everyday life.

When a magnet comes into close proximity with a previously unmagnetized ferromagnetic material, it causes local magnetization of the material with closest unlike poles. Regions within the material (called domains) act like small bar magnets. Within domains, the poles of individual atoms are aligned. Each atom acts like a tiny bar magnet. Domains are small and randomly oriented in an unmagnetized ferromagnetic object. In response to an external magnetic field, the domains may grow to millimeter size, aligning themselves. This induced magnetization can be made permanent if the material is heated and then cooled, or simply tapped in the presence of other magnets, as shown in. Permanent magnets (materials that can be magnetized by an external magnetic field and remain magnetized after the external field is removed) are ferromagnetic, as are other materials that are noticeably attracted to them.

Unmagnetized to Magnetized Iron: (a) An unmagnetized piece of iron (or other ferromagnetic material) has randomly oriented domains. (b) When magnetized by an external field, the domains show greater alignment, and some grow at the expense of others. Individual atoms are aligned within domains; each atom acts like a tiny bar magnet.

Ferromagnetism arises from the fundamental property of an electron; it also carries charge to have a dipole moment. Thus, an electron itself behaves as a tiny magnet. This dipole moment comes from the more fundamental property of the electron—its quantum mechanical spin. The quantum mechanical nature of this spin limits the electron to only two states: with the magnetic field pointing either “up” or “down” (for any choice of up and down). When these tiny magnetic dipoles are aligned in the same direction, their individual magnetic fields combine to create a measurable macroscopic field.

However, in materials with a filled electron shell, the total dipole moment of the electrons is zero, as the spins are in up/down pairs. Only atoms with partially filled shells (i.e., unpaired spins) can have a net magnetic moment. Thus ferromagnetism only occurs in materials with partially filled shells. (According to Hund’s rules, the first few electrons in a shell tend to have the same spin, thereby increasing the total dipole moment. )

Accordingly, only certain materials (such as iron, cobalt, nickel, and gadolinium) exhibit strong magnetic effects. Such materials are called ferromagnetic, after the Latin word for iron, ferrum. A group of materials made from the alloys of the rare earth elements are also used as strong and permanent magnets (a popular one is neodymium). Other materials exhibit weak magnetic effects, detectable only with sensitive instruments. Not only do ferromagnetic materials respond strongly to magnets (the way iron is attracted to magnets), they can also be magnetized themselves—that is, they can be induced to be magnetic or made into permanent magnets.

Ferromagnetism is very important in industry and modern technology, and is the basis for many electrical and electromechanical devices such as: electromagnets, electric motors, generators, transformers, and magnetic storage (e.g., tape recorders and hard disks). 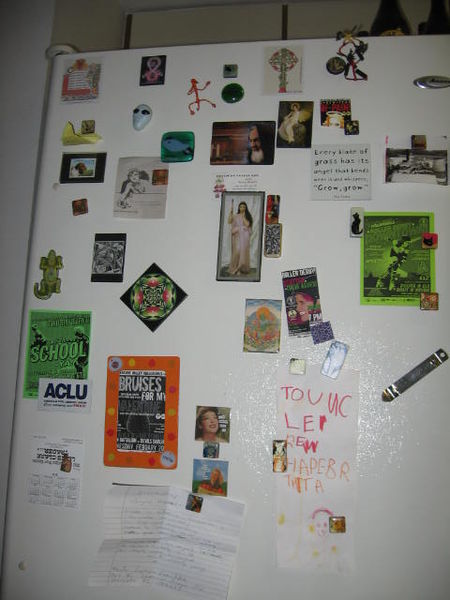 Refrigerator Magnets: Different magnets attached to the doors of a refrigerator.

Constituent atoms or molecules of paramagnetic materials have permanent magnetic moments ( dipoles ), even in the absence of an applied field. Generally, the permanent moment is caused by the spin of unpaired electrons in atomic or molecular electron orbitals. In pure paramagnetism, the dipoles do not interact with each other and are randomly oriented in the absence of an external field due to thermal agitation; this results in a zero net magnetic moment. When a magnetic field is applied, the dipoles will tend to align with the applied field, resulting in a net magnetic moment in the direction of the applied field. 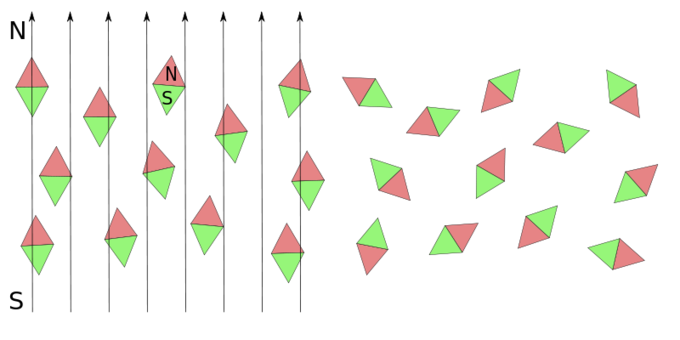 Paramagnetic materials include magnesium, molybdenum, lithium and tantalum. Unlike ferromagnets, paramagnets do not retain any magnetization in the absence of an externally applied magnetic field, because thermal motion randomizes the spin orientations responsible for magnetism. Some paramagnetic materials retain spin disorder at absolute zero (meaning they are paramagnetic in the ground state). Thus the total magnetization drops to zero when the applied field is removed. Even in the presence of the field there is only a small induced magnetization because only a small fraction of the spins will be oriented by the field.

Diamagnetism is the property of an object or material that causes it to create a magnetic field in opposition to an externally applied magnetic field. Thus, unlike paramagnets, diamagnets are repelled by magnetic fields, which can lead to its unusual effects, such as levitation of diamagnetic material when located above powerful magnet (as shown in ). 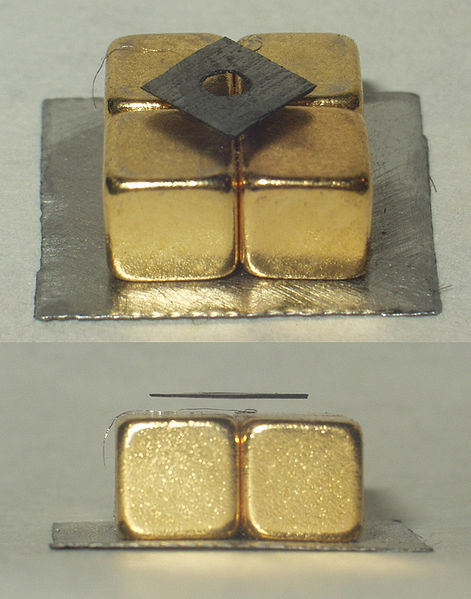 Diamagnetism, to a greater or lesser degree, is a property of all materials and it always makes a weak contribution to the material’s response to a magnetic field. However, for materials that display some other form of magnetism (such as ferromagnetism or paramagnetism), the diamagnetic contribution becomes negligible. In addition, all conductors exhibit an effective diamagnetism when they experience a changing magnetic field. For example, the Lorentz force on electrons causes them to circulate around forming eddy currents. The eddy currents then produce an induced magnetic field opposite the applied field, resisting the conductor’s motion.

Solenoids are loops of wire around a metallic core, and can be used to create controlled magnetic fields.

Explain why solenoids are important and their structure

A solenoid is a coil wound into a tightly packed helix. In physics, the term solenoid refers to a long, thin loop of wire, often wrapped around a metallic core; it produces a magnetic field when an electric current is passed through it. Solenoids are important because they can create controlled magnetic fields and can be used as electromagnets. The term solenoid refers specifically to a coil designed to produce a uniform magnetic field in a volume of space (in which some experiment might be performed).

Early in the 19th century, it was discovered that electrical currents cause magnetic effects. The first significant observation was made by the Danish scientist Hans Christian Oersted (1777–1851), who found that a compass needle was deflected by a current-carrying wire. This was the first significant evidence that the movement of charges had any connection with magnets. Electromagnetism is the use of electric current to make magnets. These temporarily induced magnets are called electromagnets. Electromagnets are employed for many uses: from a wrecking yard crane that lifts scrapped cars, to controlling the beam of a 90-km-circumference particle accelerator, to the magnets in medical imaging machines (for other examples see ). 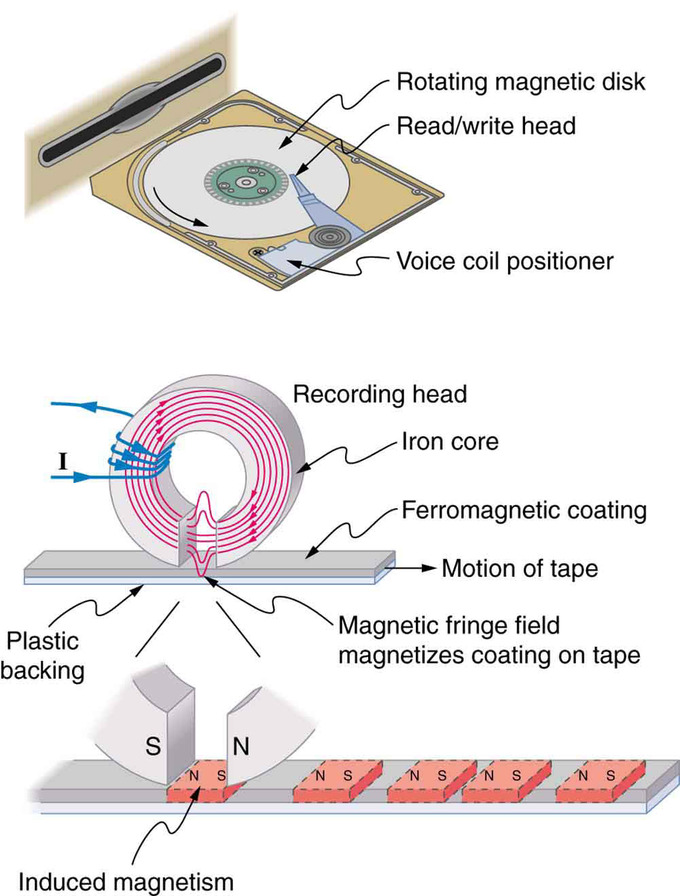 Uses of Electromagnets: An electromagnet induces regions of permanent magnetism on a floppy disk coated with a ferromagnetic material. The information stored here is digital (a region is either magnetic or not); in other applications, it can be analog (with a varying strength), such as on audiotapes.

An electromagnet creates magnetism with an electric current. In later sections we explore this more quantitatively, finding the strength and direction of magnetic fields created by various currents. Currents, including those associated with other submicroscopic particles like protons, allow us to explain ferromagnetism and all other magnetic effects. Ferromagnetism, for example, results from an internal cooperative alignment of electron spins, possible in some materials but not in others.