Cathode Ray Tube, TV and Computer Monitors, and the Oscilloscope

A cathode ray tube consists of a vacuum tube that contains one or more electron guns used to excite phosphors on a screen to produce images.

Cathode Ray Tube, TV and Computer Monitors, and the Oscilloscope

The cathode ray tube (CRT) is a vacuum tube containing one or more electron guns (a source of directed electrons) and a fluorescent screen used to view images. It has a means to accelerate and deflect the electron beam onto the fluorescent screen to create the images. The images are generated when electrons strike fluorescent phosphors on the screen, which then emit light (the color varies depending on the phosphor used, ). 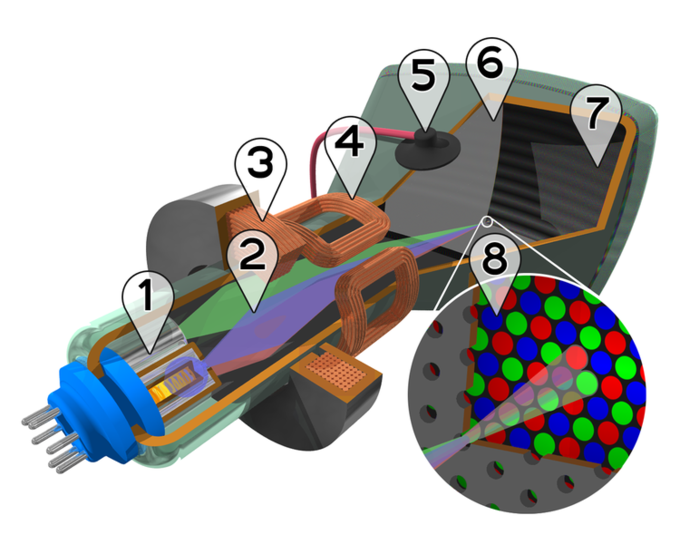 The CRT uses an evacuated glass envelope which is large, deep (i.e., long from front screen face to rear end), fairly heavy, and relatively fragile. As a matter of safety, the face is typically made of thick lead glass so as to be highly shatter-resistant and to block most X-ray emissions, particularly if the CRT is used in a consumer product.

The phosphors in a CRT’s screen are the materials that directly produce the photons generated by the CRT. These phosphors are struck by incoming electrons from the electron gun, absorb energy, and then re-emit some or all of that energy in the form of light (this process is called phosphorescence). By varying the type of phosphor used, one may vary the wavelength of light emitted by the phosphor when excited. For example, black and white TV screens use one type of phosphor, while color TVs use three (blue, red, and green). Early computer terminal monitors used only green phosphors. 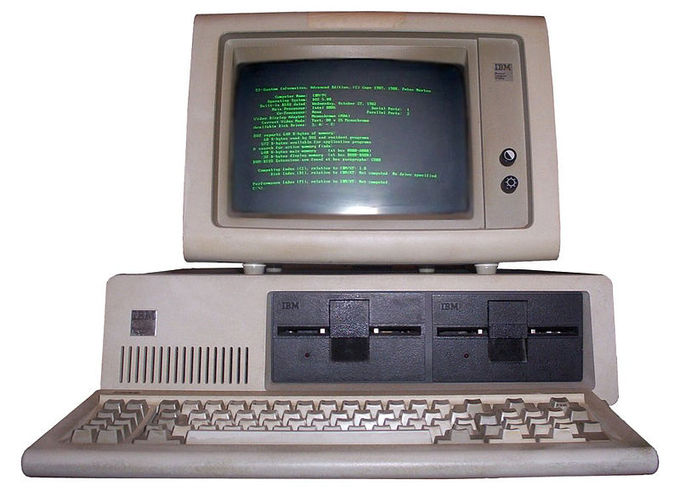 In television sets and computer monitors, the entire front area of the tube is scanned repetitively and systematically in a fixed pattern called a raster. An image is produced by controlling the intensity of each of the three electron beams, one for each additive primary color (red, green, and blue) with a video signal as a reference. In all modern CRT monitors and televisions, the beams are bent by magnetic deflection, which is a varying magnetic field generated by coils and driven by electronic circuits around the neck of the tube.

Although a mainstay of display technology for decades, CRT-based computer monitors and televisions constitute a dead technology. The demand for CRT screens has dropped precipitously since 2000, and this falloff has been accelerating in the latter half of that decade. The rapid advances and falling prices of LCD flat panel technology, first for computer monitors and then for televisions, has been the key factor in the demise of competing display technologies such as CRT, rear-projection, and plasma display.

An oscilloscope is a device that measures and displays voltages as a time versus voltage graph. The voltage difference between the positive and negative probe leads is measured, buffered, and displayed on the screen as a continuous curve. Oscilloscopes are generally used to see if a circuit is performing as expected, but oscilloscopes are also useful for comparing different signals to each other. 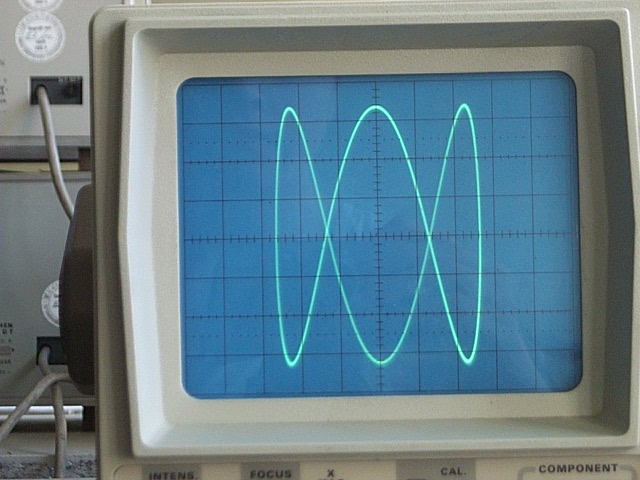 Many oscilloscopes also use CRT displays, though LCD displays are becoming more common. In oscilloscope CRTs, electrostatic deflection is used, rather than the magnetic deflection commonly used with television and other large CRTs. The beam is deflected horizontally by applying an electric field between a pair of plates to its left and right, and vertically by applying an electric field to plates above and below.

Oscilloscopes use electrostatic rather than magnetic deflection because the inductive reactance of the magnetic coils would limit the frequency response of the instrument. The color of the oscilloscope phosphor is much less important than in the case of color televisions or computer monitors since the primary purpose is to evaluate signal voltages rather than construct complex images; however, the persistence of the phosphor may be more important. Phosphors are available with persistences ranging from less than one microsecond to several seconds. For visual observation of brief transient events, a long persistence phosphor may be desirable. For events which are fast and repetitive, or high frequency, a short-persistence phosphor is generally preferable.