Evaluate the implications of net torque on conservation of energy

Let us consider some examples of momentum: the Earth continues to spin at the same rate it has for billions of years; a high-diver who is “rotating” when jumping off the board does not need to make any physical effort to continue rotating, and indeed would be unable to stop rotating before hitting the water. These examples have the hallmarks of a conservation law. Following are further observations to consider:

1. A closed system is involved. Nothing is making an effort to twist the Earth or the high-diver. They are isolated from rotation changing influences (hence the term “closed system”).

2. Something remains unchanged. There appears to be a numerical quantity for measuring rotational motion such that the total amount of that quantity remains constant in a closed system.

3. Something can be transferred back and forth without changing the total amount. A diver rotates faster with arms and legs pulled toward the chest from a fully stretched posture.

This is an expression for the law of conservation of angular momentum.

An example of conservation of angular momentum is seen in an ice skater executing a spin, as shown in. The net torque on her is very close to zero, because 1) there is relatively little friction between her skates and the ice, and 2) the friction is exerted very close to the pivot point. 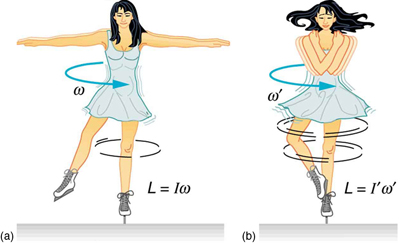 Conservation of Angular Momentum: An ice skater is spinning on the tip of her skate with her arms extended. Her angular momentum is conserved because the net torque on her is negligibly small. In the next image, her rate of spin increases greatly when she pulls in her arms, decreasing her moment of inertia. The work she does to pull in her arms results in an increase in rotational kinetic energy.

(Both F and r are small, and so [latex]\vec{\tau} = \vec{\text{r}} \times \vec{\text{F}}[/latex] is negligibly small. ) Consequently, she can spin for quite some time. She can also increase her rate of spin by pulling in her arms and legs. When she does this, the rotational inertia decreases and the rotation rate increases in order to keep the angular momentum [latex]\text{L} = \text{I} \omega[/latex] constant. (I: rotational inertia, [latex]\omega[/latex]: angular velocity)

Conservation of angular momentum is one of the key conservation laws in physics, along with the conservation laws for energy and (linear) momentum. These laws are applicable even in microscopic domains where quantum mechanics governs; they exist due to inherent symmetries present in nature.

Conservation of Angular Momentum Theory: What it do?

In a closed system, angular momentum is conserved in a similar fashion as linear momentum.

Evaluate the difference in equation variables in rotational versus angular momentum

What if an rotational component of motion is introduced? Is momentum still conserved ? 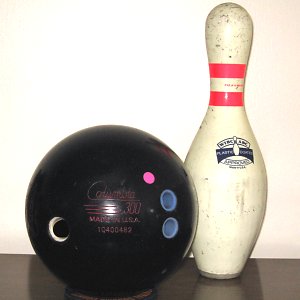 Bowling ball and pi: When a bowling ball collides with a pin, linear and angular momentum is conserved

For example, take the case of an archer who decides to shoot an arrow of mass m1 at a stationary cylinder of mass m2 and radius r, lying on its side. If the archer releases the arrow with a velocity v1i and the arrow hits the cylinder at its radial edge, what’s the final momentum ? 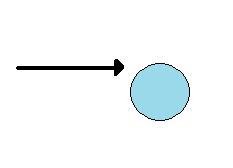 Arrow hitting cyclinde: The arrow hits the edge of the cylinder causing it to roll.