Conservation of Energy in Rotational Motion

In this atom we will discuss work and energy associated with rotational motion. shows a worker using an electric grindstone propelled by a motor. Sparks are flying, and noise and vibration are created as layers of steel are pared from the pole. The stone continues to turn even after the motor is turned off, but it is eventually brought to a stop by friction. Clearly, the motor had to work to get the stone spinning. This work went into heat, light, sound, vibration, and considerable rotational kinetic energy. 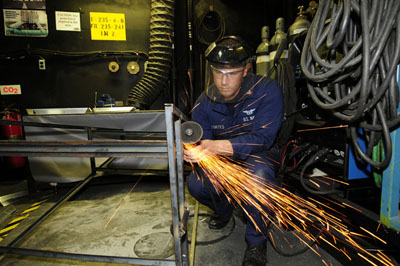 Work must be done to rotate objects such as grindstones or merry-go-rounds. The simplest rotational situation is one in which the net force is exerted perpendicular to the radius of a disc and remains perpendicular as the disc starts to rotate. The force is parallel to the displacement, and so the net work (W) done is the product of the force (F) and the radius (r) of the disc (this is otherwise known as torque(τ)) times the angle (θ) of rotation:

The final rotational kinetic energy equals the work done by the torque: