Describe process that leads to the thin film interference

This is a phenomenon that occurs when incident rays reflected by the upper and lower boundaries of a thin film interfere with one another and form a new wave. A material is considered to be a thin film if its thickness is in the sub-nanometer to micron range, e.g. a soap bubble. Studying the new wave can shed light on properties of the film, such as thickness or refractive index. Interference effects are most prominent when the light interacts with something that has a size similar to its own wavelength. The thickness of a thin film is a few times smaller than the wavelength of the light, λ. Color is indirectly associated with wavelength. The interference ratio of wavelength to size of the object causes the appearance of colors.

Thin Film Interference: In this video I continue with my tutorials on Electromagnetism to Optics which is pitched at university undergraduate level. I have intended for a long time to record videos which describe the transition made from classical electromagnetism to optics. In many respects these videos will cover ‘wave’ optics. I devote much time to discussing the complex exponential representation of waves, Maxwell’s Equations, the wave equation etc.Specifically here, I derive the formula for the optical path difference and the phase difference for a ‘wave’ of light propagating through a thin film. This expression can be used for anti reflective coatings. The phase difference is the product of the optical path differene and the wave vector k.I hope it’s of use!! Thank you for watching and I hope that this matches your requirements. 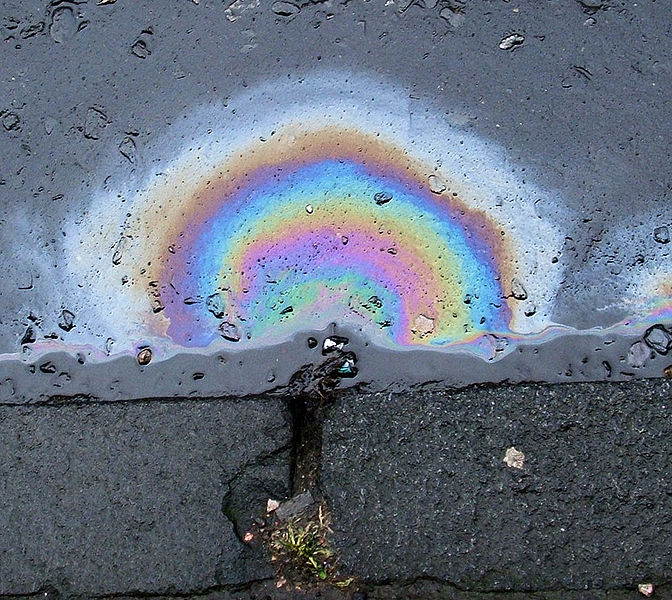 Thin Film Interference in Oil: Thin film interference can be seen in this oil slick.

shows a diagram of how thin film interference works. As light strikes the surface of a film it is either transmitted or reflected at the upper surface. Light that is transmitted reaches the bottom surface and may once again be transmitted or reflected. The light reflected from the upper and lower surfaces will interfere. The degree of constructive or destructive interference between the two light waves is dependent upon the difference in their phase. This difference is dependent upon the thickness of the film layer, the refractive index of the film, and the angle of incidence of the original wave on the film. Additionally, a phase shift of 180° or [latex]\pi[/latex] radians may be introduced upon reflection at a boundary depending on the refractive indices of the materials on either side said boundary. This phase shift occurs if the refractive index of the medium the light is travelling through is less than the refractive index of the material it is striking. In other words, if [latex]\text{n}_{1} < \text{n}_{2}[/latex]and the light is travelling from material 1 to material 2, then a phase shift will occur upon reflection. The pattern of light that results from this interference can appear either as light and dark bands or as colorful bands depending upon the source of the incident light.

Light on a Thin Film: Light incident on a thin film. Demonstration of the optical path length difference for light reflected from the upper and lower boundaries.

Interference will be constructive if the optical path difference is equal to an integer multiple of the wavelength of light:

Polarization By Passing Light Through Polarizers

Polarization is the attribute that wave oscillations have a definite direction relative to the direction of propagation of the wave. 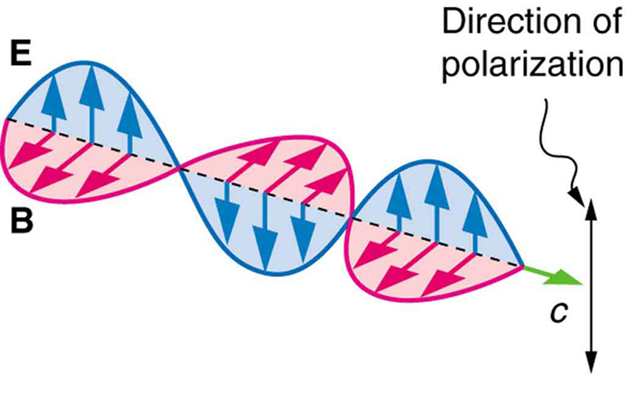 Figure 2: An EM wave, such as light, is a transverse wave. The electric and magnetic fields are perpendicular to the direction of propagation.

Now, to examine the effects of passing light through a polarizer, lets look at Figure 3. shows a stationary vertical slot, which will act as a polarizer, and two waves traveling in the same direction, but one is oscillating vertically,a, (and therefore vertically polarized), and the other, b, horizontally. What happens to these waves as they pass through the polarizer?When wave a, the vertically oscillating wave is passed through the vertically polarized slot, nothing happens. The wave passes through untouched or manipulated. When wave b, the horizontally oscillating wave is passed through, the vertically polarized slot blocks the wave, and it is not passed through at all. Now that we understand the concept of polarization, and how it works, how can we apply this to make it useful? Look at Figure 4. The image on the left is full of glare, which makes it hard to see what we are looking at. The image on the right was taken with a polarized lens, so you only see the image, and none of the annoying glare. How this works is diagramed in Figure 5. Many light sources are unpolarized, and are comprised of many waves in all possible directions. Polarized lenses only allow one direction of light to pass through, minimizing the unwanted aspects of the light rays, such as glare. Simply, passing light through a polarized material changes the intensity of the light.

Figure 4: These two photographs of a river show the effect of a polarizing filter in reducing glare in light reflected from the surface of water. Part (b) of this figure was taken with a polarizing filter and part (a) was not. As a result, the reflection of clouds and sky observed in part (a) is not observed in part (b). Polarizing sunglasses are particularly useful on snow and water. (credit: Amithshs, Wikimedia Commons) 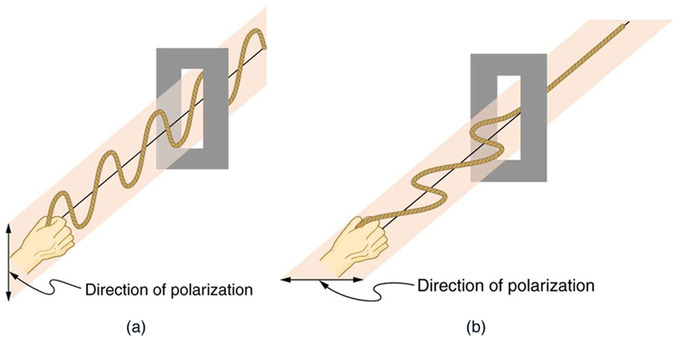 Figure 3: Example of passing light through a polarizer

Lets call the angle between the direction of polarization and the axis of the polarization filter θ. The original intensity of the light before it is passed through a filter is denoted by I0. In order to find the new intensity of light after traveling through the material is shown by the following equation:

If you pass light through two polarizing filters, you will get varied effects of polarization. If the two filters are oriented exactly perpendicular to each other, no light will pass through at all. If they are exactly parallel to each other, there will be no additional affect from the additional filter.

Polarization By Scattering and Reflecting

Unpolarized light can be polarized artificially, as well as by natural phenomenon like reflection and scattering.

Calculate angle of reflection of complete polarization from indices of refraction 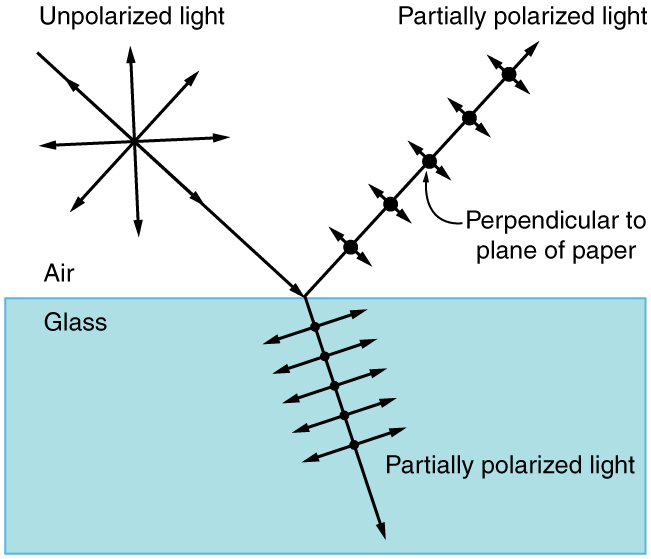 Polarization by Reflection: Unpolarized light has equal amounts of vertical and horizontal polarization. After interaction with a surface, the vertical components are preferentially absorbed or refracted, leaving the reflected light more horizontally polarized. This is akin to arrows striking on their sides bouncing off, whereas arrows striking on their tips go into the surface.

Since the light is split into two, and part of it is refracted, the amount of polarization to the reflected light depends on the index of refraction of the reflective surface. We can use the following equation to determine the angle of reflection at which light will be completely polarized: 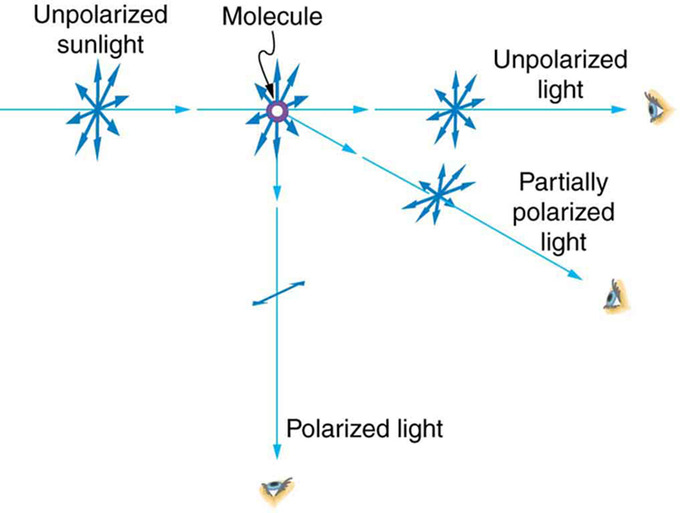 Scattering of Light by the Atmosphere

Rayleigh scattering describes the air’s gas molecules scattering light as it enters the atmosphere; it also describes why the sky is blue.

Rayleigh scattering is the elastic scattering of waves by particles that are much smaller than the wavelengths of those waves. The particles that scatter the light also need to have a refractive index close to 1. This law applies to all electromagnetic radiation, but in this atom we are going to focus specifically on why the atmosphere scatters the visible spectrum of electromagnetic waves, also known as visible light. In this case, the light is scattered by the gas molecules of the atmosphere, and the refractive index of air is 1.

Rayleigh scattering is due to the polarizability of an individual molecule. This polarity describes how much the electric charges in the molecule will vibrate in an electric field. The formula to calculate the intensity of the scattering for a single particle is as follows:

where I is the resulting intensity, I0 is the original intensity, α is the polarizability, λ is the wavelength, R is the distance to the particle, and θ is the scattering angle.

While you will probably not need to use this formula, it is important to understand that scattering has a strong dependence on wavelength. From the formula, we can see that a shorter wavelength will be scattered more strongly than a longer one.( The longer the wavelength, the larger the denominator, and from algebra we know that a larger denominator in a fraction means a smaller number. )

Why is the Sky Blue?

As we just learned, light scattering is inversely proportional to the fourth power of the light wavelength. So, the shorter the wavelength, the more it will get scattered. Since green and blue have relatively short wavelengths, you see a mixture of these colors in the sky, and the sky appears to be blue. When you look closer and closer to the sun, the light is not being scattered because it is approaching a 90-degree angle with the scattering particles. Since the light is being scattered less and less, you see the longer wavelengths, like red and yellow. This is why the sun appears to be a light yellow color.

Why are Sunsets Colorful?

shows a sunset. We know why the sky is blue, but why are there all those colors in a sunset? The reddening that occurs near the horizon is because the light has to pass through a significantly higher volume of air than when the sun is high in the sky. This increases the Rayleigh scattering effect and removes all blue light from the direct path of the observer. The remaining unscattered light is of longer wavelengths and so appears orange. 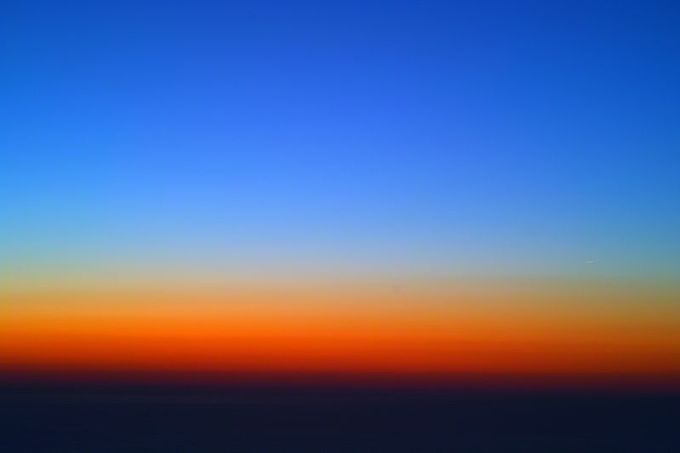 Sunset: A gradient of colors in the sky during sunset

Dispersion of the Visible Spectrum

Dispersion is the spreading of white light into its full spectrum of wavelengths; this phenomenon can be observed in prisms and rainbows.

Within the electromagnetic spectrum, there is only a portion that is visible to the human eye. Visible light is the range of wavelengths of electromagnetic radiation that humans can see. For a typical human eye, this ranges from 390 nm to 750 nm. shows this range and the colors associated with it:

As you can see from, these are the colors of a rainbow and it is no coincidence. 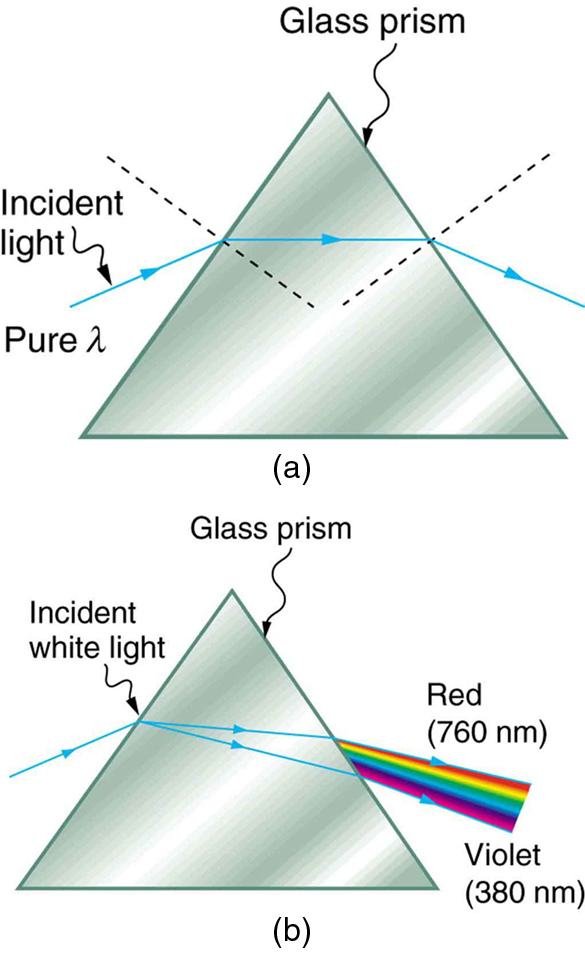 This same principle can be applied to rainbows. Refer to. Rainbows are not only caused by refraction, like prisms, but also reflection. Light enters a drop of water and is reflected from the back of the droplet. The light is refracted once as it enters the drop, and again as is exits the drop. In water, the refractive index varies with wavelength, so the light is dispersed. 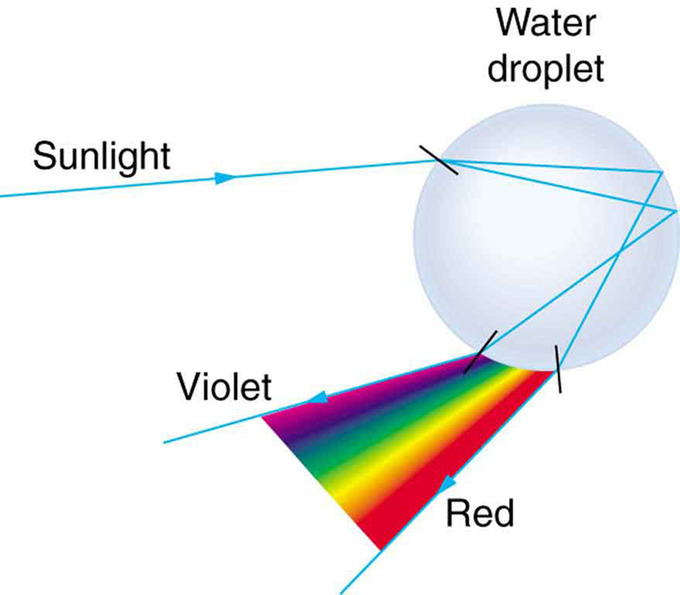 Light and a Water Droplet: Part of the light falling on this water drop enters and is reflected from the back of the drop. This light is refracted and dispersed both as it enters and as it leaves the drop.