Shifting the Paradigm of Physics

Special relativity changed the way we view space and time and showed us that time is relative to an observer.

Formulate major changes in the understanding of time, space, mass, and energy that were introduced by the theory of Special Relativity

The theory of Special Relativity and its implications spurred a paradigm shift in our understanding of the nature of the universe, the fundamental fabric of which being space and time. Before 1905, scientists considered space and time as completely independent objects. Time could not affect space and space could not affect time. After 1905, however, the Special Theory of Relativity destroyed this old, but intuitive, view. Specifically, Special Relativity showed us that space and time are not independent of one another but can be mixed into each other and therefore must be considered as the same object, which we shall denote as space-time. The consequences of space/time mixing are:

Other important consequences which will be discussed in another section are

Why is there a mixing between space and time? In order to examine this we must know the founding principles of relativity. They are:

If one accepts the second principle as fact then it immediately follows that space and time are not independent. Why? Let us look at the experiment in in which there is a light source, a fixed observer, and a rocket ship moving toward the light source. The two observers are related by a coordinate , or space-time, transformation. The second principle then tells us that no matter how fast the rocket is moving, both observers must measure the same light speed emanating from the source. The only way this can happen is if the clock of the rocket observer is ticking at a different rate than the stationary observer. How much different? This can be expressed in the time dilation equation: 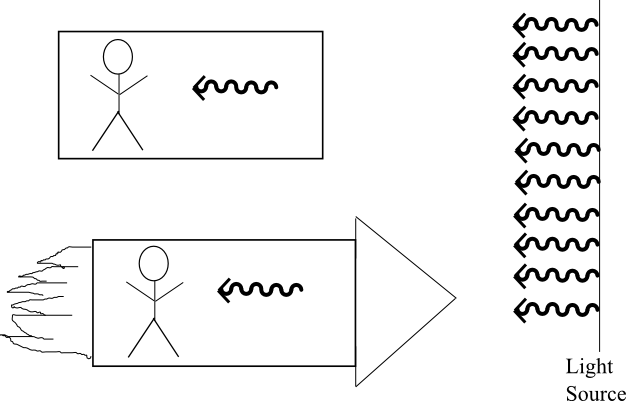 Measuring Light: A stationary observer will measure the same speed of light as an observer who is moving in a rocket ship even if that rocket is moving close to light speed.

One of the more radical results of time dilation is the so-called “twin paradox. ” The twin paradox is a thought experiment in special relativity that involves identical twins. One of the twins goes on a journey into space in a rocket that has a velocity near the speed of light. Upon returning home the twin finds that the twin that remained on Earth has aged more. This consequence altered the perception that aging is necessarily constant.

The square root factor in the time dilation equation is very important and we denote it as:

This factor shows up frequently in special relativity. For example the length contraction formula is:

Another radical finding that was made possible by the discovery of special relativity is the equivalence of energy and mass. Combined with other laws of physics, the postulates of special relativity predict that mass and energy are related by: [latex]\text{E} = \text{mc}^2[/latex], where c is the speed of light in vacuum. This altered the perception that mass and energy are completely different things and paved the way for nuclear power and nuclear weapons.

Thus in every day life [latex]\gamma \approx 1[/latex] and we do not experience significant time dilation or length contraction. If we did, life would be very different.

We live in four-dimensional space-time, in which the ordering of certain events can depend on the observer.

Let us examine two observers who are moving relative to one another at a constant velocity. We shall denote them as observer A and observer A’. Observer A sets up a space-time coordinate system (t, x, y, z); similarly, A’ sets up his own space-time coordinate system (t’, x’, y’, z’). (See for an example. ) Therefore both observers live in a four-dimensional world with three space dimensions and one time dimension.

Two Coordinate Systems: Two coordinate systems in which the primed frame moves with velocity v with respect to the unprimed frame

You should not find it odd to work with four dimensions; any time you have to meet your friend somewhere you have to tell him four variables: where (three spatial coordinates) and when (one time coordinate). In other words, we have always lived in four dimensions, but so far you have probably thought of space and time as completely separate.

The Movement of Light in Four Dimensions

Back to our example: let us assume that at some point in space-time there is a beam of light that emerges. Both observers measure how far the beam has traveled at each point in time and how long it took to travel to travel that distance. That is to say, observer A measures:

where [latex](\text{T}, \text{X}, \text{Y}, \text{Z})[/latex] refers to the coordinates in either frame. Therefore there is a specific rule that all light paths must follow. For general events we can define the quantity:

We define the separation between space-time points as follows:

We separate these events because they are very different. For example, for a space-like separation you can always find a coordinate transformation that reverses the time-ordering of the events (try to prove this for the example in ). This phenomenon is known as the relativity of simultaneity and may be counterintuitive.

Let us examine two car crashes, one in New York and one in London, such that they occur in the same time in one frame. In this situation, the space-time separation between the two events is space-like. The question of whether the events are simultaneous is relative: in some reference frames the two accidents may happen at the same time; in other frames (in a different state of motion relative to the events) the crash in London may occur first; and in still other frames the New York crash may occur first. (In practice, this does not affect us because the frames that switch the order of the events must move at unreachably high speeds. )

Finally, let’s discuss an important result of special relativity — that the energy [latex]\text{E}[/latex] of an object moving with speed [latex]\text{v}[/latex] is:

Gravity is a geometrical effect in which a metric matrix plays a special role, and the motion of objects are altered by curved space.

Special relativity indicates that humans live in a four-dimensional space-time where the ‘distance’ [latex]\text{s}[/latex] between points in space-time can be regarded as:

Four-dimensional Minkowski space-time is only one of many different possible space-times (geometries) which differ in their metric matrix. An arbitrary metric matrix can be denoted as [latex]\text{g}[/latex], raising questions as to what space-times with different metrics represent. In 1916, Einstein found the importance of these space-times in his theory of general relativity.

General relativity, or the general theory of relativity, is the geometric theory of gravitation published by Albert Einstein in 1916. It is the current description of gravitation in modern physics. General relativity generalizes special relativity and Newton’s law of universal gravitation, providing a unified description of gravity as a geometric property of space and time, or space-time. In particular, the curvature of space-time is directly related to the energy and momentum of whatever matter and radiation are present. The relation is specified by the Einstein field equations, a system of partial differential equations.

A pictorial example is shown in the figure below, where anything that is near the Earth has its motion altered due to the curved space-time. This altering of motion affects satellites, the moon, and even humans. If the space around the Earth were flat, humans would simply float away if they jumped upwards. Since the Earth alters the space-time, humans are pulled toward the Earth. In essence, gravity is a geometrical effect.