Heat is a measurable form of energy that can be transferred from one body to another; it is not a substance.

Introduction to Heat and Heat Transfer 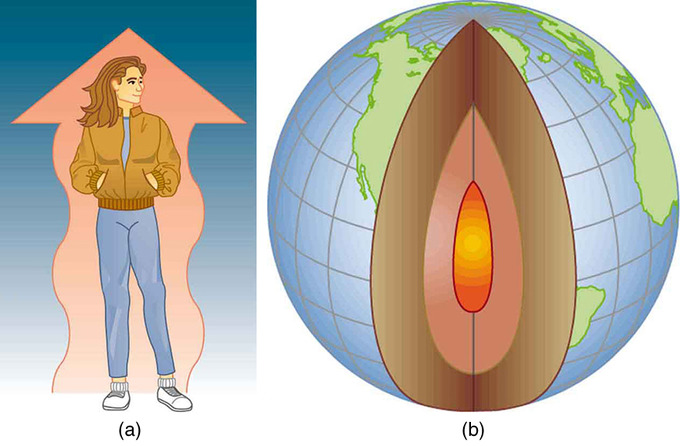 Examples of Heat Transfer: (a) The chilling effect of a clear breezy night is produced by the wind and by radiative heat transfer to cold outer space. (b) There was once great controversy about the Earth’s age, but it is now generally accepted to be about 4.5 billion years old. Much of the debate is centered on the Earth’s molten interior. According to our understanding of heat transfer, if the Earth is really that old, its center should have cooled off long ago. The discovery of radioactivity in rocks revealed the source of energy that keeps the Earth’s interior molten, despite heat transfer to the surface, and from there to cold outer space.

Scottish physicist James Clerk Maxwell, in his 1871 classic Theory of Heat, was one of many who began to build on the already established idea that heat was something to do with matter in motion. This was the same idea put forwards by Sir Benjamin Thompson in 1798, who said he was only following on from the work of many others. One of Maxwell’s recommended books was Heat as a Mode of Motion by John Tyndall. Maxwell outlined four stipulations for the definition of heat:

In the following sections, we will define heat more rigorously, paying particular attention to how it can be measured and quantified.

Estimation of Quantity of Heat

After defining and quantifying heat transfer and its effects on physical systems, we will discuss the methods by which heat is transferred. So many processes involve heat transfer, so that it is hard to imagine a situation where no heat transfer occurs. Yet every process involving heat transfer takes place by only three methods:

Heat is the spontaneous transfer of energy due to a temperature difference.

Consider two objects at different temperatures that are brought together. Energy is transferred from the hotter object to the cooler one, until both objects reach thermal equilibrium (i.e., both become the same temperature). How is this energy transferred? No work is done by either object, because no force acts through a distance. The transfer of energy is caused by the temperature difference, and ceases once the temperatures are equal. This observation leads to the following definition of heat: Heat is the spontaneous transfer of energy due to a temperature difference. 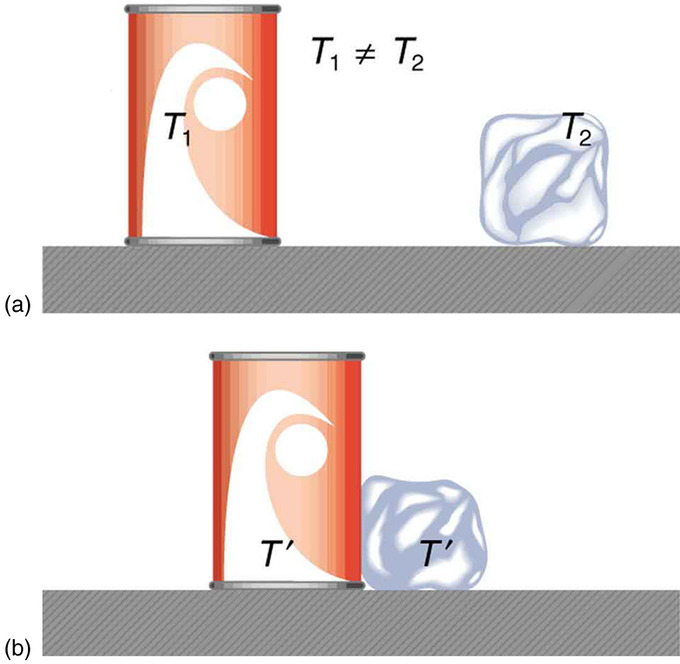 Where Is the Most Heat Lost?: Use movable thermometers to discover where a house has poor insulation.

Heat Transfer: A brief introduction to heat transfer for students.

Heat is often confused with temperature. For example, we may say the heat was unbearable, when we actually mean that the temperature was high. Heat is a form of energy, whereas temperature is not. The misconception arises because we are sensitive to the flow of heat, rather than the temperature.

Owing to the fact that heat is a form of energy, it has the SI unit of joule (J). The calorie (cal) is a common unit of energy, defined as the energy needed to change the temperature of 1.00 g of water by 1.00ºC —specifically, between 14.5ºC and 15.5ºC, since there is a slight temperature dependence. Another common unit of heat is the kilocalorie (kcal), which is the energy needed to change the temperature of 1.00 kg of water by 1.00ºC. Since mass is often specified in kilograms, kilocalorie is commonly used. Food calories (given the notation Cal, and sometimes called “big calorie”) are actually kilocalories (1kilocalorie=1000 calories), a fact not easily determined from package labeling in the United States, but more common in Europe and elsewhere. In some engineering fields, the British Thermal Unit (BTU), equal to about 1.055 kilo-joules, is widely used. 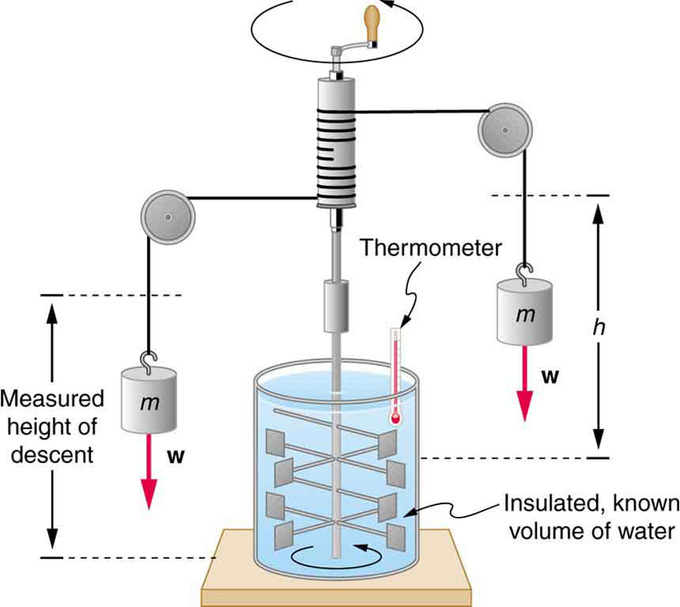 The total amount of energy transferred as heat is conventionally written as Q for algebraic purposes. Heat released by a system into its surroundings is by convention a negative quantity (Q < 0); when a system absorbs heat from its surroundings, it is positive (Q > 0).

It is also possible to change the temperature of a substance by doing work. Work can transfer energy into or out of a system. This realization helped establish the fact that heat is a form of energy. James Prescott Joule (1818–1889) performed many experiments to establish the mechanical equivalent of heat—the work needed to produce the same effects as heat transfer. In terms of the units used for these two terms, the best modern value for this equivalence is 1.000 kcal = 4186 J. We consider this equation as the conversion between two different units of energy.

Figure 1 shows one of Joule’s most famous experimental setups for demonstrating the mechanical equivalent of heat. It demonstrated that work and heat can produce the same effects, and helped establish the principle of conservation of energy. Gravitational potential energy (PE) (work done by the gravitational force) is converted into kinetic energy (KE), and then randomized by viscosity and turbulence into increased average kinetic energy of atoms and molecules in the system, producing a temperature increase. His contributions to the field of thermodynamics were so significant that the SI unit of energy was named after him.

Heat added or removed from a system changes its internal energy (a concept we will discuss in the following section) and thus its temperature. Such a temperature increase is observed while cooking. However, adding heat does not necessarily increase the temperature. An example is melting of ice; that is, when a substance changes from one phase to another. Work done on the system or by the system can also change the internal energy of the system. Joule demonstrated that the temperature of a system can be increased by stirring. If an ice cube is rubbed against a rough surface, work is done by the frictional force. A system has a well-defined internal energy, but we cannot say that it has a certain “heat content” or “work content.” We use the phrase “heat transfer” to emphasize its nature.

The internal energy of a system is the sum of all kinetic and potential energy in a system.

Express the internal energy in terms of kinetic and potential energy

We can also think of the internal energy as the sum of all the energy states of each component in the system:

At any finite temperature, kinetic and potential energies are constantly converted into each other, but the total energy remains constant in an isolated system. The kinetic energy portion of internal energy gives rise to the temperature of the system. We can use statistical mechanics to relate the (somewhat) random motions of particles in a system to the mean kinetic energy of the ensemble of particles, and thus the empirically measurable quantity expressed as temperature.

We can see that internal energy is an extensive property: it depends on the size of the system or on the amount of substance it contains.

In most cases, we are not concerned with the total amount of internal energy in the system, as it is rarely convenient or necessary to consider all energies belonging to the system. Rather, we are far more interested in the change in internal energy, given some transfer of work or heat. This can be expressed as:

Q is heat added to a system and Wmech is the mechanical work performed by the surroundings due to pressure or volume changes in the system. All other perturbations and energies added by other processes, such as an electric current introduced into an electronic circuit, is summarized as the term Wextra.

This expression is the first law of thermodynamics. 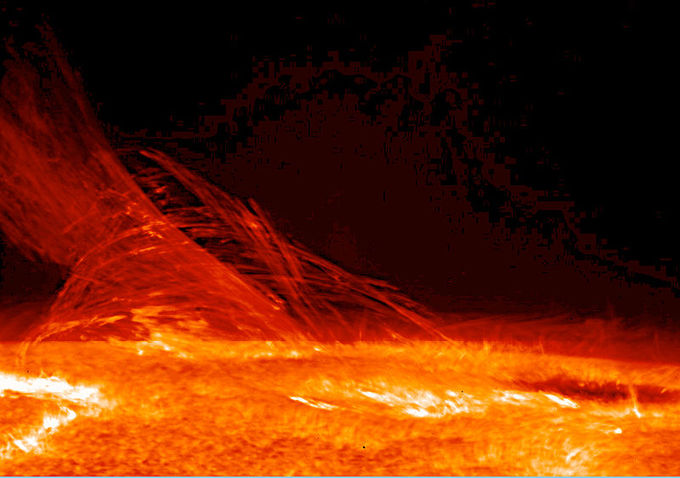 The Sun and Internal Energy: Nuclear fusion in the sun converts nuclear potential energy into available internal energy and keeps the temperature of the Sun very high.