Energy Stored in a Magnetic Field

In an inductor, energy is stored within a magnetic field.

Describe behavior of an inductor when the current is changed, and express energy stored in a magnetic field in a form of equation

Due to energy conservation, the energy needed to drive the original current must have an outlet. For an inductor, that outlet is the magnetic field—the energy stored by an inductor is equal to the work needed to produce a current through the inductor. The formula for this energy is given as:

(Eq. 1), where L is the inductance in units of Henry and I is the current in units of Ampere.

Let’s consider Fig 1, an example of a solenoid (ℓ: length, N: number of turns, I: current, A: cross-section area) that works as an inductor. From Eq. 1, the energy stored in the magnetic field created by the solenoid is:

Combining the work of physicists including Oersted, Coulomb, Gauss, and Faraday, and adding his own insights, James Clerk Maxwell developed a complete and overarching theory showing electric and magnetic forces are not separate, but different forms of the same thing: the electromagnetic force. In 1865, he did this in the form of four equations that state the following:

Simple and brilliant in their insight, Maxwell’s famous equations would still be hard to prove. Since changing electric fields create relatively weak magnetic fields, they could not be easily detected at the time of Maxwell’s hypothesis.

It was not until 1888 that Maxwell’s prediction passed an important test when Heinrich Hertz generated and detected certain types of electromagnetic waves in the laboratory. He performed a series of experiments that not only confirmed the existence of electromagnetic waves, but also verified that they travel at the speed of light.

Hertz used an AC RLC (resistor-inductor-capacitor) circuit that resonates at a known frequency and connected it to a loop of wire as shown in. High voltages induced across the gap in the loop produced sparks that were visible evidence of the current in the circuit and that helped generate electromagnetic waves. Across the laboratory, Hertz had another loop attached to another RLC circuit, which could be tuned (as the dial on a radio) to the same resonant frequency as the first and could, thus, be made to receive electromagnetic waves. This loop also had a gap across which sparks were generated, giving solid evidence that electromagnetic waves had been received. 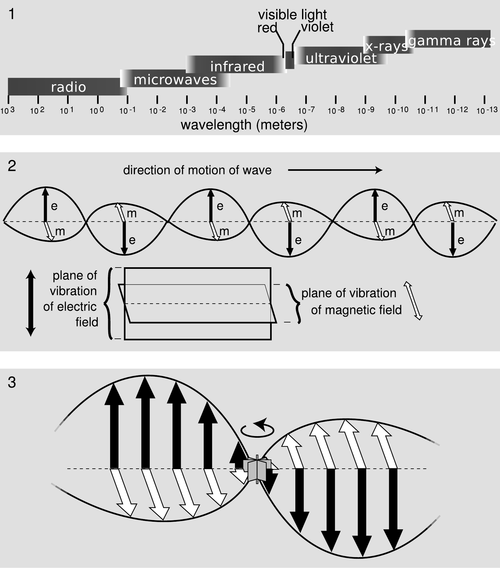 EM Wave: The propogation of an electromagnetic wave as predicted by Maxwell and confirmed by Hertz.