Fluid Dynamics and Its Applications

The circulation and cleansing of blood, as well as the transport of nutrients rely on the motion of fluids.

We have discussed many situations in which fluids are static, though there are many situations where fluids flow. For example, a column of smoke rises from a camp fire, water streams from a fire hose, blood courses through your veins. Why does rising smoke curl and twist? How does a nozzle increase the speed of water emerging from a hose? How does the body regulate blood flow? Fluid dynamics, the physics of fluids in motion, allows us to answer these and many other questions.

Application in the Circulatory System

For example, consider the circulatory system—a connected series of tubes with fluid flowing through them. The heart is the driver of the circulatory system, generating cardiac output (CO) by rhythmically contracting and relaxing. This creates changes in regional pressures and (combined with a complex valvular system in the heart and the veins) ensures that the blood moves around the circulatory system in one direction. The “beating” of the heart generates pulsatile blood flow, conducted into the arteries across the micro-circulation and then back via the venous system to the heart.

The aorta, the main artery, leaves the left side of the heart and proceeds to divide into smaller and smaller arteries that first become arterioles and eventually become capillaries, through which oxygen transfer occurs. The capillaries connect to venules, into which the deoxygenated blood passes from the cells back into the blood. The blood then travels back through the network of veins to the right heart. The micro-circulation (arterioles, capillaries and venules) constitutes most of the area of the vascular system and is the site of the transfer of O2 into the cells.

The venous system returns the de-oxygenated blood to the right heart where it is pumped into the lungs to become oxygenated. This is also where CO2 and other gaseous wastes are exchanged and expelled during breathing. Blood then returns to the left side of the heart where it begins the process again. The heart, vessels and lungs are all actively involved in maintaining healthy cells and organs, and all influence the fluid dynamics of the blood.

Now consider how nutrients are transported through a human body. Diffusion is the movement of substances due to random thermal molecular motion. Fluids can even diffuse through solids (such as fumes or odors entering ice cubes). Diffusion is the dominant mechanism by which the exchange of nutrients and waste products occurs between the blood and tissue, and between air and blood in the lungs. In the evolutionary process, as organisms became larger they needed quicker methods of transportation than net diffusion, due to the larger distances involved in the transport. This factor lead to the development of circulatory systems. Less sophisticated, single-celled organisms still rely totally on diffusion for the removal of waste products and the uptake of nutrients.

Another important form of fluid movement is osmosis—the transport of water through a semipermeable membrane (shown in ) from a region of high concentration to a region of low concentration. It is driven by the imbalance in water concentration. Similarly, dialysis is the transport of any other molecule through a semipermeable membrane due to its concentration difference. Both osmosis and dialysis are used by the kidneys to cleanse the blood, and the medical application of dialysis through machinery is important in the treatment of individuals with failing kidney function. 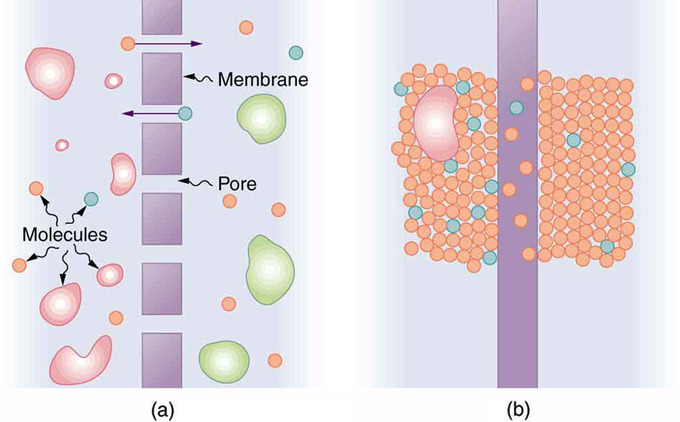 A Semipermeable Membrane: A semipermeable membrane with small pores that allow only small molecules to pass through.

Flow velocity and volumetric flow rates are important quantities in fluid dynamics used to quantify motion of a fluid and are interrelated.