The latent heat is the energy associated with a phase change of a substance.

Describe the latent heat as a form of energy 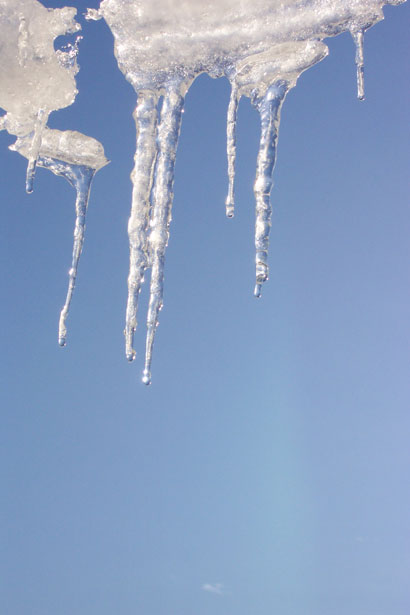 Melting Icicle: Heat from the air transfers to the ice causing it to melt.

Energy is required to melt a solid because the cohesive bonds between the molecules in the solid must be broken apart so that the molecules can move around at comparable kinetic energies; thus, there is no rise in temperature. Similarly, energy is needed to vaporize a liquid, because molecules in a liquid interact with each other via attractive forces. There is no temperature change until a phase change is complete. The temperature of a glass of lemonade initially at 0 ºC stays at 0 ºC until all the ice has melted. Conversely, energy is released during freezing and condensation, usually in the form of thermal energy. Work is done by cohesive forces when molecules are brought together. The corresponding energy must be given off (dissipated) to allow them to stay together. 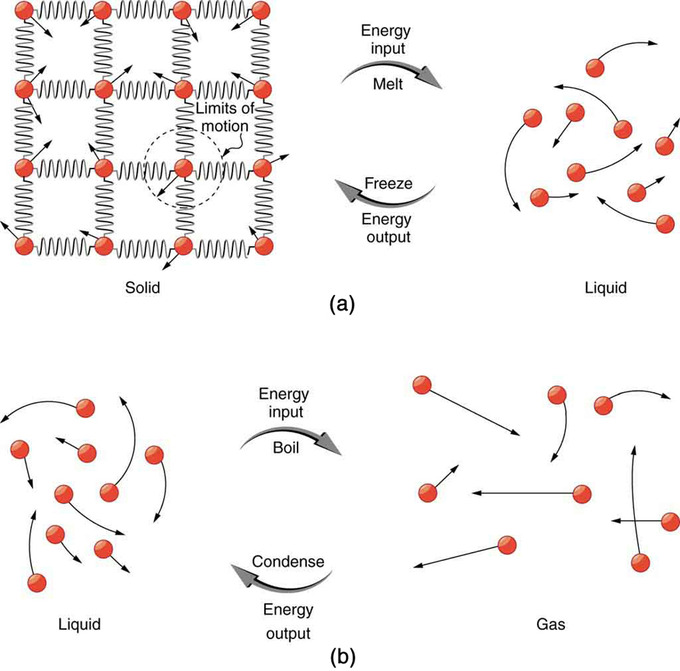 Phase Transitions: (a) Energy is required to partially overcome the attractive forces between molecules in a solid to form a liquid. That same energy must be removed for freezing to take place. (b) Molecules are separated by large distances when going from liquid to vapor, requiring significant energy to overcome molecular attraction. The same energy must be removed for condensation to take place. There is no temperature change until a phase change is complete.

Latent heat is an intensive property measured in units of J/kg. Both Lf and Lv depend on the substance, particularly on the strength of its molecular forces as noted earlier. Lf and Lv are collectively called latent heat coefficients. They are latent, or hidden, because in phase changes, energy enters or leaves a system without causing a temperature change in the system; so, in effect, the energy is hidden. Note that melting and vaporization are endothermic processes in that they absorb or require energy, while freezing and condensation are exothermic process as they release energy.

Heating Up Ice: Andrew Vanden Heuvel explores latent heat while trying to cool down his soda.

Significant amounts of energy are involved in phase changes. Let us look, for example, at how much energy is needed to melt a kilogram of ice at 0º C to produce a kilogram of water at 0°C. Using the equation for a change in temperature and the value for water (334 kJ/kg), we find that Q=mLf=(1.0kg)(334kJ/kg)=334kJ is the energy to melt a kilogram of ice. This is a lot of energy as it represents the same amount of energy needed to raise the temperature of 1 kg of liquid water from 0ºC to 79.8ºC. Even more energy is required to vaporize water; it would take 2256 kJ to change 1 kg of liquid water at the normal boiling point (100ºC at atmospheric pressure) to steam (water vapor). This example shows that the energy for a phase change is enormous compared to energy associated with temperature changes without a phase change. 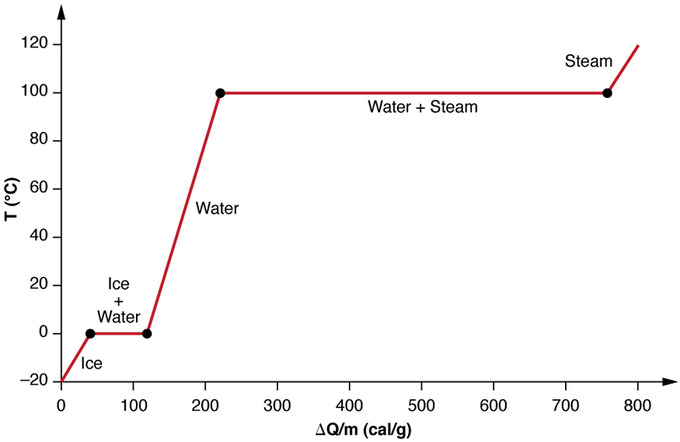 Heating and Phase Changes of Water: A graph of temperature versus energy added. The system is constructed so that no vapor evaporates while ice warms to become liquid water, and so that, when vaporization occurs, the vapor remains in of the system. The long stretches of constant temperature values at 0ºC and 100ºC reflect the large latent heat of melting and vaporization, respectively.

A phase change we have neglected to mention thus far is sublimation, the transition of solid directly into vapor. The opposite case, where vapor transitions directly into a solid, is called deposition. Sublimation has its own latent heat Ls and can be used in the same way as Lvand Lf.