Evaporation is the process of molecules on a liquid’s surface achieving sufficient energy to break free of the liquid and become gas.

Illustrate the causes for evaporation near the surface of a liquid

Evaporation is a type of vaporization of a liquid that only occurs on the liquid’s surface. Usually, the molecules in a glass of water do not have enough heat energy to escape from the liquid. With sufficient heat, however, the liquid would quickly turn into vapor. When the molecules collide, they transfer energy to each other in varying degrees. Sometimes the transfer is so one-sided for a molecule near the surface that it achieves enough energy to escape the liquid.

Three key parts to evaporation are heat, atmospheric pressure (determines the percent humidity) and air movement. For molecules of a liquid to evaporate, they must be located near the surface, be moving in the proper direction, and have sufficient kinetic energy to overcome liquid- phase intermolecular forces. When only a small proportion of the molecules meet these criteria, the rate of evaporation is low. Since the kinetic energy of a molecule is proportional to its temperature, evaporation proceeds more quickly at higher temperatures. As the faster-moving molecules escape, the remaining molecules have lower average kinetic energy, and the temperature of the liquid decreases. This phenomenon is also called evaporative cooling. This is why evaporating sweat cools the human body. Evaporation also tends to proceed more quickly with higher flow rates between the gaseous and liquid phases and in liquids with higher vapor pressure. For example, laundry on a clothes line will dry (by evaporation) more rapidly on a windy day than on a still day. 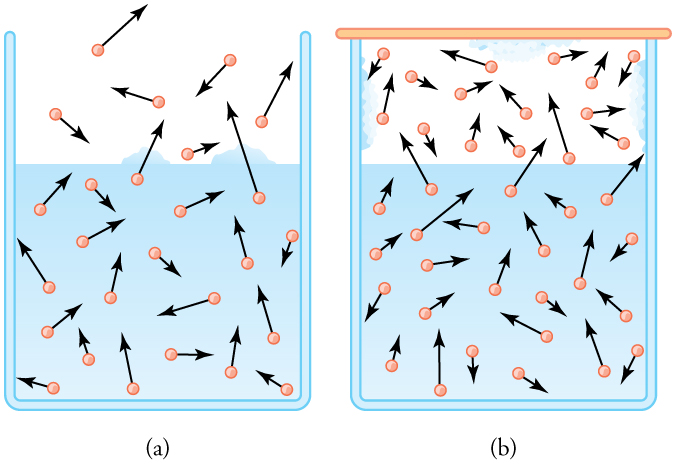 Vapor Pressure Diagram: (a) Because of the distribution of speeds and kinetic energies, some water molecules can break away to the vapor phase even at temperatures below the ordinary boiling point. (b) If the container is sealed, evaporation will continue until there is enough vapor density for the condensation rate to equal the evaporation rate. This vapor density and the partial pressure it creates are the saturation values. They increase with temperature and are independent of the presence of other gases, such as air. They depend only on the vapor pressure of water.

At equilibrium, evaporation and condensation processes exactly balance and there is no net change in the volume of either phase.

Left to equilibration, many compositions will form a uniform single phase, but depending on the temperature and pressure even a single substance may separate into two or more distinct phases. Within each phase, the properties are uniform but between the two phases properties differ.

Water in a closed jar with an air space over it forms a two phase system. Most of the water is in the liquid phase, where it is held by the mutual attraction of water molecules. Even at equilibrium, molecules are constantly in motion and, once in a while, a molecule in the liquid phase gains enough kinetic energy to break away from the liquid phase and enter the gas phase. Likewise, every once in a while a vapor molecule collides with the liquid surface and condenses into the liquid. At equilibrium, evaporation and condensation processes exactly balance and there is no net change in the volume of either phase.

At room temperature and pressure, the water jar reaches equilibrium when the air over the water has a humidity of about 3%. This percentage increases as the temperature goes up. At 100 °C and atmospheric pressure, equilibrium is not reached until the air is 100% water. If the liquid is heated a little over 100 °C, the transition from liquid to gas will occur not only at the surface, but throughout the liquid volume: the water boils.

The Earth’s atmosphere is not unchanging. The water vapor in it changes phases. It is in a phase equilibrium. Collisions between water molecules in the atmosphere allows some to condense and some to remain in vapor. Similarly, several lighter gases can escape the gravitational field entirely. 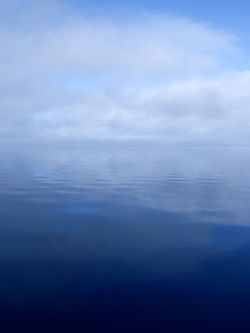 Water Vapor in the Atmosphere: Water vapor condenses in the atmosphere