If an object lacks enough energy to pass through a barrier, it is possible for it to “tunnel” through imaginary space to the other side.

Imagine throwing a ball at a wall and having it disappear the instant before it makes contact and appear on the other side. The wall remains intact; the ball did not break through it. Believe it or not, there is a finite (if extremely small) probability that this event would occur. This phenomenon is called quantum tunneling.

While the possibility of tunneling is essentially ignorable at macroscopic levels, it occurs regularly on the nanoscale level. Consider, for example, a p-orbital in an atom. Between the two lobes there is a nodal plane. By definition there is precisely 0 probability of finding an electron anywhere along that plane, and because the plane extends infinitely it is impossible for an electron to go around it. Yet, electrons commonly cross from one lobe to the other via quantum tunneling. They never exist in the nodal area (this is forbidden); instead they travel through imaginary space. 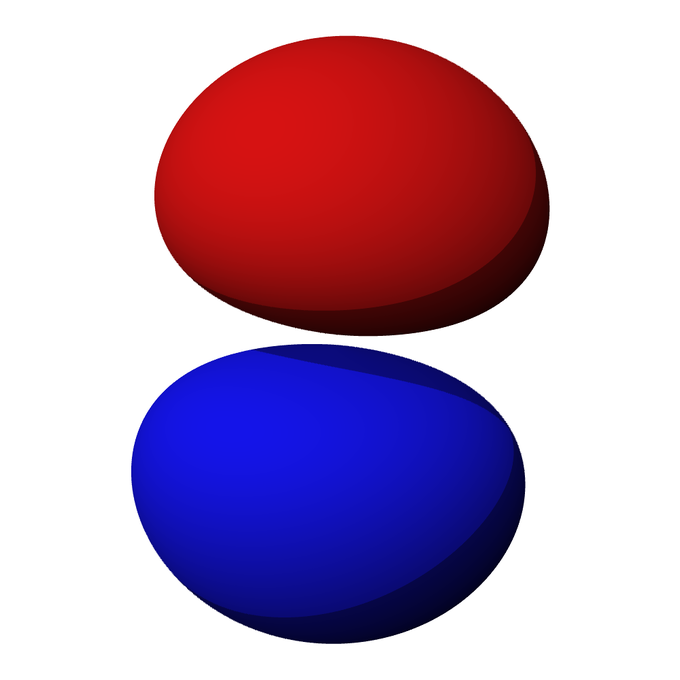 P-Orbital: The red and blue lobes represent the volume in which there is a 90 percent probability of finding an electron at any given time if the orbital is occupied.

Imaginary space is not real, but it is explicitly referenced in the time-dependent Schrödinger equation, which has a component of [latex]\text{i}[/latex] (the square root of [latex]-1[/latex], an imaginary number):

And because all matter has a wave component (see the topic of wave-particle duality), all matter can in theory exist in imaginary space. But what accounts for the difference in probability of an electron tunneling over a nodal plane and a ball tunneling through a brick wall? The answer is a combination of the tunneling object’s mass ([latex]\text{m}[/latex]) and energy ([latex]\text{E}[/latex]) and the energy height ([latex]\text{U}_0[/latex]) of the barrier through which it must travel to get to the other side.

When it reaches a barrier it cannot overcome, a particle’s wave function changes from sinusoidal to exponentially diminishing in form. The solution for the Schrödinger equation in such a medium is:

Therefore, the probability of an object tunneling through a barrier decreases with the object’s increasing mass and with the increasing gap between the energy of the object and the energy of the barrier. And although the wave function never quite reaches 0 (as can be determined from the [latex]\text{e}^{-\text{x}}[/latex] functionality), this explains how tunneling is frequent on nanoscale but negligible at the macroscopic level.

Conservation of Nucleon Number and Other Laws

Through radioactive decay, nuclear fusion and nuclear fission, the number of nucleons (sum of protons and neutrons) is always held constant.

Define the Law of Conservation of Nuclear Number

In physics and chemistry there are many conservation laws—among them, the Law of Conservation of Nucleon Number, which states that the total number of nucleons (nuclear particles, specifically protons and neutrons) cannot change by any nuclear reaction.

Consider the three modes of decay. In gamma decay, an excited nucleus releases gamma rays, but its proton (Z) and neutron (A-Z) count remain the same:

Nuclear fission of U-235: If U-235 is bombarded with a neutron (light blue small circe), the resulting U-236 produced is unstable and undergoes fission. The resulting elements (shown here as Kr-92 and Ba-141) do not contain as many nucleons as U-236, with the remaining three neutrons being released as high-energy particles, able to bombard another U-235 atom and maintain a chain reaction.

In beta decay, a nucleus releases energy and either an electron or a positron. In the case of an electron being released, atomic mass (A) remains the same as a neutron is converted into a proton, raising atomic number by 1:

In the case of a positron being released, atomic mass remains constant as a proton is converted to a neutron, lowering atomic number by 1:

Electron capture has the same effect on the number of protons and neutrons in a nucleus as positron emission.

Alpha decay is the only type of radioactive decay that results in an appreciable change in an atom ‘s atomic mass. However, rather than being destroyed, the two protons and two neutrons an atom loses in alpha decay are released as a helium nucleus.

Chain reactions of nuclear fission release a tremendous amount of energy, but follow the Law of Conservation of Nucleon Number. Consider, for example, the multistep reaction that occurs when a U-235 nucleus accepts a neutron, as in:

In each step, the total atomic mass of all species is a constant value of 236. This is the same with all fission reactions.

Finally, nuclear fusion follows the Law of Conservation of Nucleon Number. Consider the fusion of deuterium and tritium (both hydrogen isotopes):

It is well understood that the tremendous amounts of energy released by nuclear fission and fusion can be attributed to the conversion of mass to energy. However, the mass that is converted to energy is rather small compared to any sample, and never includes the conversion of a proton or neutron to energy. Thus, the number of nucleons before and after fission and fusion is always constant.