Average velocity is defined as the change in position (or displacement) over the time of travel.

Contrast speed and velocity in physics

In everyday usage, the terms “speed” and “velocity” are used interchangeably. In physics, however, they are distinct quantities. Speed is a scalar quantity and has only magnitude. Velocity, on the other hand, is a vector quantity and so has both magnitude and direction. This distinction becomes more apparent when we calculate average speed and velocity.

Average Velocity: The kinematic formula for calculating average velocity is the change in position over the time of travel.

The SI unit for velocity is meters per second, or m/s, but many other units (such as km/h, mph, and cm/s) are commonly used. Suppose, for example, an airplane passenger took five seconds to move -4 m (the negative sign indicates that displacement is toward the back of the plane ). His average velocity would be:

The minus sign indicates that the average velocity is also toward the rear of the plane.

The average velocity of an object does not tell us anything about what happens to it between the starting point and ending point, however. For example, we cannot tell from average velocity whether the airplane passenger stops momentarily or backs up before he gets to the back of the plane. To get more details, we must consider smaller segments of the trip over smaller time intervals.

To illustrate the difference between average speed and average velocity, consider the following additional example. Imagine you are walking in a small rectangle. You walk three meters north, four meters east, three meters south, and another four meters west. The entire walk takes you 30 seconds. If you are calculating average speed, you would calculate the entire distance (3 + 4 + 3 + 4 = 14 meters) over the total time, 30 seconds. From this, you would get an average speed of 14/30 = 0.47 m/s. When calculating average velocity, however, you are looking at the displacement over time. Because you walked in a full rectangle and ended up exactly where you started, your displacement is 0 meters. Therefore, your average velocity, or displacement over time, would be 0 m/s. 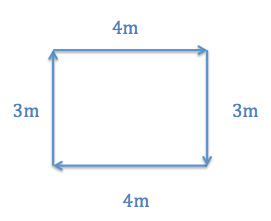 Average Speed vs. Average Velocity: If you started walking from one corner and went all the way around the rectangle in 30 seconds, your average speed would be 0.47 m/s, but your average velocity would be 0 m/s.

Instantaneous velocity is the velocity of an object at a single point in time and space as calculated by the slope of the tangent line.

Differentiate instantaneous velocity from other ways of determining velocity

Typically, motion is not with constant velocity nor speed. While driving in a car, for example, we continuously speed up and slow down. A graphical representation of our motion in terms of distance vs. time, therefore, would be more variable or “curvy” rather than a straight line, indicating motion with a constant velocity as shown below. (We limit our discussion to one dimensional motion. It should be straightforward to generalize to three dimensional cases.) 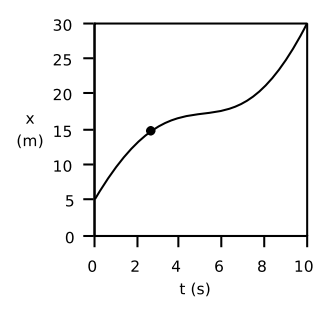 Motion with Changing Velocity: Motion is often observed with changing velocity. This would result in a curvy line when graphed with distance over time.

To calculate the speed of an object from a graph representing constant velocity, all that is needed is to find the slope of the line; this would indicate the change in distance over the change in time. However, changing velocity it is not as straightforward.

Since our velocity is constantly changing, we can estimate velocity in different ways. One way is to look at our instantaneous velocity, represented by one point on our curvy line of motion graphed with distance vs. time. In order to determine our velocity at any given moment, we must determine the slope at that point. To do this, we find a line that represents our velocity in that moment, shown graphically in. That line would be the line tangent to the curve at that point. If we extend this line, we can easily calculate the displacement of distance over time and determine our velocity at that given point. The velocity of an object at any given moment is the slope of the tangent line through the relevant point on its x vs. t graph. 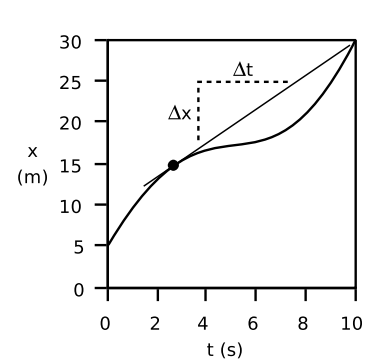 Determining instantaneous velocity: The velocity at any given moment is deﬁned as the slope of the tangent line through the relevant point on the graph

Instantaneous Velocity, Acceleration, Jerk, Slopes, Graphs vs. Time: This is how kinematics begins.

In calculus, finding the slope of curve f(x) at x=x0 is equivalent to finding the first derivative:

One interpretation of this definition is that the velocity shows how many meters the object would travel in one second if it continues moving at the same speed for at least one second.