Components of a Vector

Vectors are geometric representations of magnitude and direction and can be expressed as arrows in two or three dimensions.

Vectors are geometric representations of magnitude and direction which are often represented by straight arrows, starting at one point on a coordinate axis and ending at a different point. All vectors have a length, called the magnitude, which represents some quality of interest so that the vector may be compared to another vector. Vectors, being arrows, also have a direction. This differentiates them from scalars, which are mere numbers without a direction.

Decomposing a vector into horizontal and vertical components is a very useful technique in understanding physics problems. Whenever you see motion at an angle, you should think of it as moving horizontally and vertically at the same time. Simplifying vectors in this way can speed calculations and help to keep track of the motion of objects.

Scalars and Vectors: Mr. Andersen explains the differences between scalar and vectors quantities. He also uses a demonstration to show the importance of vectors and vector addition. 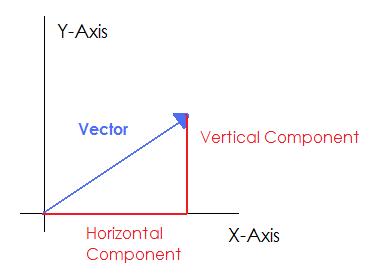 Distinguish the difference between the quantities scalars and vectors represent

Physical quantities can usually be placed into two categories, vectors and scalars. These two categories are typified by what information they require. Vectors require two pieces of information: the magnitude and direction. In contrast, scalars require only the magnitude. Scalars can be thought of as numbers, whereas vectors must be thought of more like arrows pointing in a specific direction.

Vectors require both a magnitude and a direction. The magnitude of a vector is a number for comparing one vector to another. In the geometric interpretation of a vector the vector is represented by an arrow. The arrow has two parts that define it. The two parts are its length which represents the magnitude and its direction with respect to some set of coordinate axes. The greater the magnitude, the longer the arrow. Physical concepts such as displacement, velocity, and acceleration are all examples of quantities that can be represented by vectors. Each of these quantities has both a magnitude (how far or how fast) and a direction. In order to specify a direction, there must be something to which the direction is relative. Typically this reference point is a set of coordinate axes like the x-y plane.

Scalars differ from vectors in that they do not have a direction. Scalars are used primarily to represent physical quantities for which a direction does not make sense. Some examples of these are: mass, height, length, volume, and area. Talking about the direction of these quantities has no meaning and so they cannot be expressed as vectors.

Vectors may be added or subtracted graphically by laying them end to end on a set of axes.

Model a graphical method of vector addition and subtraction

One of the ways in which representing physical quantities as vectors makes analysis easier is the ease with which vectors may be added to one another. Since vectors are graphical visualizations, addition and subtraction of vectors can be done graphically.

The graphical method of vector addition is also known as the head-to-tail method. To start, draw a set of coordinate axes. Next, draw out the first vector with its tail (base) at the origin of the coordinate axes. For vector addition it does not matter which vector you draw first since addition is commutative, but for subtraction ensure that the vector you draw first is the one you are subtracting from. The next step is to take the next vector and draw it such that its tail starts at the previous vector’s head (the arrow side). Continue to place each vector at the head of the preceding one until all the vectors you wish to add are joined together. Finally, draw a straight line from the origin to the head of the final vector in the chain. This new line is the vector result of adding those vectors together.

Graphical Addition of Vectors: The head-to-tail method of vector addition requires that you lay out the first vector along a set of coordinate axes. Next, place the tail of the next vector on the head of the first one. Draw a new vector from the origin to the head of the last vector. This new vector is the sum of the original two.

Vector Addition Lesson 1 of 2: Head to Tail Addition Method: This video gets viewers started with vector addition and subtraction. The first lesson shows graphical addition while the second video takes a more mathematical approach and shows vector addition by components.

To subtract vectors the method is similar. Make sure that the first vector you draw is the one to be subtracted from. Then, to subtract a vector, proceed as if adding the opposite of that vector. In other words, flip the vector to be subtracted across the axes and then join it tail to head as if adding. To flip the vector, simply put its head where its tail was and its tail where its head was.

It is often simpler to add or subtract vectors by using their components.

Demonstrate how to add and subtract vectors by components 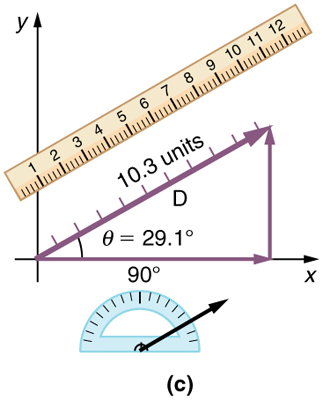 Vector with Horizontal and Vertical Components: The vector in this image has a magnitude of 10.3 units and a direction of 29.1 degrees above the x-axis. It can be decomposed into a horizontal part and a vertical part as shown.

To subtract vectors by components, simply subtract the two horizontal components from each other and do the same for the vertical components. Then draw the resultant vector as you did in the previous part.

Vector Addition Lesson 2 of 2: How to Add Vectors by Components: This video gets viewers started with vector addition using a mathematical approach and shows vector addition by components.

Multiplying Vectors by a Scalar

Multiplying a vector by a scalar changes the magnitude of the vector but not the direction.

Summarize the interaction between vectors and scalars

Although vectors and scalars represent different types of physical quantities, it is sometimes necessary for them to interact. While adding a scalar to a vector is impossible because of their different dimensions in space, it is possible to multiply a vector by a scalar. A scalar, however, cannot be multiplied by a vector.

To multiply a vector by a scalar, simply multiply the similar components, that is, the vector’s magnitude by the scalar’s magnitude. This will result in a new vector with the same direction but the product of the two magnitudes.

For example, if you have a vector A with a certain magnitude and direction, multiplying it by a scalar a with magnitude 0.5 will give a new vector with a magnitude of half the original. Similarly if you take the number 3 which is a pure and unit-less scalar and multiply it to a vector, you get a version of the original vector which is 3 times as long. As a more physical example take the gravitational force on an object. The force is a vector with its magnitude depending on the scalar known as mass and its direction being down. If the mass of the object is doubled, the force of gravity is doubled as well.

Multiplying vectors by scalars is very useful in physics. Most of the units used in vector quantities are intrinsically scalars multiplied by the vector. For example, the unit of meters per second used in velocity, which is a vector, is made up of two scalars, which are magnitudes: the scalar of length in meters and the scalar of time in seconds. In order to make this conversion from magnitudes to velocity, one must multiply the unit vector in a particular direction by these scalars.

Unit Vectors and Multiplication by a Scalar

Multiplying a vector by a scalar is the same as multiplying its magnitude by a number.

Predict the influence of multiplying a vector by a scalar

In addition to adding vectors, vectors can also be multiplied by constants known as scalars. Scalars are distinct from vectors in that they are represented by a magnitude but no direction. Examples of scalars include an object’s mass, height, or volume.

When multiplying a vector by a scalar, the direction of the vector is unchanged and the magnitude is multiplied by the magnitude of the scalar. This results in a new vector arrow pointing in the same direction as the old one but with a longer or shorter length. You can also accomplish scalar multiplication through the use of a vector’s components. Once you have the vector’s components, multiply each of the components by the scalar to get the new components and thus the new vector.

A useful concept in the study of vectors and geometry is the concept of a unit vector. A unit vector is a vector with a length or magnitude of one. The unit vectors are different for different coordinates. In Cartesian coordinates the directions are x and y usually denoted [latex]\hat{\text{x}}[/latex] and [latex]\hat{\text{y}}[/latex]. With the triangle above the letters referred to as a “hat”. The unit vectors in Cartesian coordinates describe a circle known as the “unit circle” which has radius one. This can be seen by taking all the possible vectors of length one at all the possible angles in this coordinate system and placing them on the coordinates. If you were to draw a line around connecting all the heads of all the vectors together, you would get a circle of radius one.

Position, displacement, velocity, and acceleration can all be shown vectors since they are defined in terms of a magnitude and a direction.

Examine the applications of vectors in analyzing physical quantities

Vectors can be used to represent physical quantities. Most commonly in physics, vectors are used to represent displacement, velocity, and acceleration. Vectors are a combination of magnitude and direction, and are drawn as arrows. The length represents the magnitude and the direction of that quantity is the direction in which the vector is pointing. Because vectors are constructed this way, it is helpful to analyze physical quantities (with both size and direction) as vectors.

In physics, vectors are useful because they can visually represent position, displacement, velocity and acceleration. When drawing vectors, you often do not have enough space to draw them to the scale they are representing, so it is important to denote somewhere what scale they are being drawn at. For example, when drawing a vector that represents a magnitude of 100, one may draw a line that is 5 units long at a scale of [latex]\displaystyle \frac{1}{20}[/latex]. When the inverse of the scale is multiplied by the drawn magnitude, it should equal the actual magnitude.

Acceleration, being the time rate of change of velocity, is composed of a magnitude and a direction, and is drawn with the same concept as a velocity vector. A value for acceleration would not be helpful in physics if the magnitude and direction of this acceleration was unknown, which is why these vectors are important. In a free body diagram, for example, of an object falling, it would be helpful to use an acceleration vector near the object to denote its acceleration towards the ground. If gravity is the only force acting on the object, this vector would be pointing downward with a magnitude of 9.81 [latex]\frac{\text{m}}{\text{s}^2}[/latex] of 32.2 [latex]\frac{\text{ft}}{\text{s}^2}[/latex]. 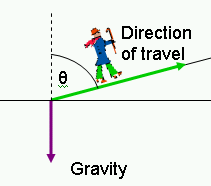 Vector Diagram: Here is a man walking up a hill. His direction of travel is defined by the angle theta relative to the vertical axis and by the length of the arrow going up the hill. He is also being accelerated downward by gravity.