The New Deal was a series of economic programs enacted between 1933-1936 in response to the Great Depression.

Analyze the programs that comprised the first and second New Deals, and the effects they had on American political life.

The New Deal was a series of economic programs enacted in the U.S. between 1933 and 1936 that involved presidential executive orders passed by Congress during the first term of President Franklin D. Roosevelt. The programs were a response to the Great Depression. They focused on the “3 Rs”: relief, recovery, and reform. Relief was offered to the unemployed and poor; recovery was intended to bring the economy to normal levels; and system reform was hoped would prevent a repeat depression.

Before the New Deal, deposits at banks were not insured against loss. When thousands of banks faced bankruptcy, many people lost all their savings. There was no national safety net, no public unemployment insurance, and no Social Security. Franklin D. Roosevelt entered office with no specific set of plans for dealing with the Great Depression. Faced with the catastrophe he established an informal brain trust: a group of advisers who tended to hold positive views of pragmatic government intervention in the economy.

The First and Second New Deals

Many historians distinguish between a First New Deal (1933–34) and a Second New Deal (1935–38). The First New Deal dealt with diverse groups that needed help for economic survival, from banking and railroads to industry and farming. The Federal Emergency Relief Association (FERA), for instance, provided $500 million for relief operations by states and cities, while the Civil Works Administration (CWA) gave localities money to operate make-work projects. The second was more liberal and more controversial.

The Second New Deal was begun in the spring of 1935. The Administration proposed or endorsed several important new initiatives in response to setbacks in the Court, a new skepticism in Congress, and growing popular clamor for more dramatic action. It included a national work program, the Works Progress Administration (WPA), that made the federal government the largest single employer in the nation. The other major innovations of New Deal legislation were the creation of the U.S. Housing Authority and Farm Security Administration, both begun in 1937, and the Fair Labor Standards Act of 1938, which set maximum hours and minimum wages for most categories of workers.

The New Deal produced a political realignment. The Democratic Party became the majority party, with its base in liberal idealists, the white South, traditional Democrats, big city political machines and the newly empowered labor unions and ethnic minorities. The Republican Party was split. Conservatives opposed the entire New Deal as an enemy of business and growth; liberals accepted some of it but promised to make it more efficient. This realignment crystallized into the New Deal Coalition that dominated most presidential elections into the 1960s, while the opposition Conservative Coalition largely controlled Congress from 1937 to 1963.

This realignment represented a significant shift in politics and domestic policy. It led to greatly increased federal regulation of the economy. It also marked the beginning of complex social programs and the growing power of labor unions. The effects of the New Deal remain a source of controversy and debate among economists and historians.

Federal Grants and National Efforts to Influence the States

Federal grants are economic aid issued by the government to carry out a public purpose of support or stimulation authorized by the law.

Describe the federal grant program, including its recipients and the forms grants can take

In the United States, federal grants are economic aid issued by the federal government out of the general federal revenue. A federal grant is an award of financial assistance from a federal agency to a recipient to carry out a public purpose of support or stimulation authorized by a law of the United States. A grant is not used to acquire property or services for the federal government’s direct benefit. They may also be issued by private non-profit organizations such as foundations, not-for-profit corporations or charitable trusts. For instance, PBS, the network on which Big Bird features, relies heavily upon federal grants.

Federal Grants and the 2012 Presidential Election: Republican candidate, Mitt Romney, claimed that he would cut federal grants to organizations like PBS to reduce the federal budget deficit. He famously declared, “I like PBS, I love Big Bird. Actually like you, too. But I’m not going to – I’m not going to keep on spending money on things to borrow money from China to pay for. That’s number one. “

Federal grants are defined and governed by the Federal Grant and Cooperative Agreement Act of 1977. When an awarding agency expects to be substantially involved in a project, the law requires use of a cooperative agreement instead. When the government is procuring goods or services for its own direct benefit, and not for a broader public purpose, the law requires use of a federal contract.

There are four main types of grants available:

Federal Mandates are used to implement activities to state and local governments since the post-New Deal era.

Explain the history of mandates in the twentieth century

An intergovernmental mandate refers to the responsibilities or activities that one level of government imposes on another by constitutional, legislative, executive, or judicial action. According to the Unfunded Mandates Reform Act of 1995 (UMRA), an intergovernmental mandate can take various forms. An enforceable duty refers to any type of legislation, statute, or regulation that requires or proscribes an action of state or local governments, excluding actions imposed as conditions of receiving federal aid. Certain changes in large entitlement programs refers to instances when new conditions or reductions in large entitlement programs, providing $500 million or more annually to state or local governments, are imposed by the federal government. Lastly, a reduction in federal funding for an existing mandate refers to a reduction or elimination of federal funding authorized to cover the costs of an existing mandate. Mandates can be applied either vertically or horizontally. Vertically applied mandates refer to mandates directed by a level of government at a single department or program. Horizontally applied mandates refer to mandates that affect various departments or programs.

In the United States, unfunded federal mandates are orders that induce responsibility, action, procedure, or anything else that is imposed by constitutional, administrative, executive, or judicial action for state governments, local governments, and the private sector. An unfunded mandate is a statute or regulation that requires a state or local government to perform certain actions, with no money provided for fulfilling the requirements. Public individuals or organizations also can be required to fulfill public mandates. 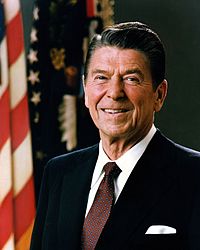 40th President of the USA, Ronald Reagan: During the Reagan Administration, Executive Order 12291 and the State and Local Cost Estimate Act of 1981 were passed. They implemented a careful examination of the true costs of federal unfunded mandates.

The increase of mandates in the 1980s and 1990s incited state and local protest. During the Reagan Administration, Executive Order 12291 and the State and Local Cost Estimate Act of 1981 were passed, implementing a careful examination of the true costs of federal unfunded mandates. In October 1993, state and local interest groups sponsored a National Unfunded Mandates Day, involving press conferences and appeals to congressional delegations about mandate relief. In early 1995, Congress passed unfunded mandate reform legislation. The period between the New Deal era and the mid-1980s witnessed a court that generally utilized an expansive interpretation of the interstate commerce clause and the Fourteenth Amendment to validate the growth of the federal government’s involvement in domestic policymaking. As of 1992, there were 172 federal mandates that obligated state or local governments to fund programs to some extent.