Identify the function and characteristics of U.S. district courts

The United States district courts are the trial courts within the U.S. federal court system. There are a total of ninety-four district courts throughout the U.S. states and territories. Every state and territory has at least one district court that is responsible for hearing cases that arise within that geographic area. With the exception of the territorial courts in Guam, the Northern Mariana Islands, and the Virgin Islands, federal district judges are appointed for life. 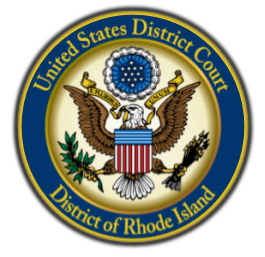 District Court of Rhode Island Seal: Each state has at least one district court that is responsible for overseeing civil and criminal cases in a given region.

The U.S. district courts are responsible for holding general trials for civil and criminal cases. Civil cases are legal disputes between two or more parties; they officially begin when a plaintiff files a complaint with the court. The complaint explains the plaintiff’s injury, how the defendant caused the injury, and requests the court’s assistance in addressing the injury. A copy of the complaint is “served” to the defendant who must, subsequently, appear for a trial. Plaintiffs may ask the court to order the defendant to stop the conduct that is causing the injury or may seek monetary compensation for the injury.

Meanwhile, criminal cases involve a U.S. attorney (the prosecutor ), a grand jury, and a defendant. Defendants may also have their own private attorney to represent them or a court-appointed attorney if they are unable to afford counsel. The purpose of the grand jury is to review evidence presented by the prosecutor to decide whether a defendant should stand trial. Criminal cases involve an arraignment hearing in which defendants enter a plea to the charges brought against them by the U.S. attorney. Most defendants will plead guilty at this point instead of going to trial. A judge may issue a sentence at this time or will schedule a hearing at a later point to determine the sentence. Those defendants who plead not guilty will be scheduled to receive a later trial.

A bankruptcy court is associated with each U.S. district court. Bankruptcy cases primarily address two concerns. First, they may provide an honest debtor with a “fresh start” by relieving the debtor of most debts. Second, bankruptcy cases ensure that creditors are repaid in a timely manner commensurate with what property the debtor has available for payment.

While district courts are the primary trial courts within the U.S., two special trial courts exist outside of the district court system. The Court of International Trade has jurisdiction over cases involving international trade and customs issues. Meanwhile, the United States Court of Federal Claims oversees claims against the United States. These claims include money damages against the U.S., unlawful takings of private property by the federal government, and disputes over federal contracts. Both courts exercise nationwide jurisdiction versus the geographic jurisdiction limited to the district courts.

The U.S. courts of appeals review the decisions made in trial courts and often serve as the final arbiter in federal cases.

Discuss the role of the U.S. federal courts of appeals in the judiciary

The U.S. federal courts of appeals, also known as appellate courts or circuit courts, hear appeals from district courts as well as appeals from decisions of federal administrative agencies. There are thirteen courts of appeals, twelve of which are based on geographic districts called circuits. These twelve circuit courts decide whether or not the district courts within their geographic jurisdiction have made an error in conducting a trial. The thirteenth court of appeals hears appeals from the Court of International Trade, the U.S. Court of Federal Claims, the Patent and Trademark Office, and others.

US Court of Appeals and District Court Map: Courts of Appeals, with the exception of one, are divided into geographic regions known as circuits that hear appeals from district courts within the region..

Every federal court litigant has the right to appeal an unfavorable ruling from the district court by requesting a hearing in a circuit court. However, only about 17% of eligible litigants do so because of the expense of appealing. In addition, few appealed cases are heard in the higher courts. Those that are, are rarely reversed.

The procedure within appellate courts diverges widely from that within district courts. First, a litigant who files an appeal, known as an appellant, must show that the trial court or an administrative agency made a legal error that affected the decision in the case. Appeals are then passed to a panel of three judges working together to make a decision. These judges base their decision on the record of the case established by the trial court or agency. The appellant presents a document called a brief, which lays out the legal arguments to persuade the judge that the trial court made an error. Meanwhile, the party defending against the appeal, known as the apellee, also presents a brief presenting reasons the trial court decision is correct or why an error made by the trial court is not significant enough to reverse the decision. The appellate judges do not receive any additional evidence or hear witnesses.

While some cases are decided on the basis of written briefs alone, other cases move on to an oral argument stage. Oral argument consists of a structured discussion between the appellate lawyers and the panel of judges on the legal principles in dispute. Each side is given a short time to present their arguments to the judges. The court of appeals decision is usually the final word in the case unless it sends the case back to the trial court for additional proceedings. A litigant who loses in the federal courts of appeals may also ask the Supreme Court to review the case.

The U.S. courts of appeals are among the most powerful and influential courts in the United States. Decisions made within courts of appeals, unlike those of the lower district courts, establish binding precedents. After a ruling has been made, other federal courts in the circuit must follow the appellate court’s guidance in similar cases, even if the trial judge thinks that the case should be handled differently. In addition, the courts of appeals often serve as the final arbiter in federal cases, since the Supreme Court hears less than 100 of the over 10,000 cases sent to it annually.

The U.S. Supreme Court is the highest tribunal within the U.S. and most often hears cases concerning the Constitution or federal law.

Explain the composition and significance of the Supreme Court, as well as its methodology to decide which cases to hear.

The U.S. Supreme Court is the highest tribunal within the U.S. and hears a limited number of cases per year associated with the Constitution or laws of the United States. It is currently composed of the Chief Justice of the United States and eight associate justices. The current Chief Justice is John Roberts; the eight associate justices are Anthony Kennedy, Clarence Thomas, Ruth Bader Ginsburg, Stephen Breyer, Samuel Alito, Sonia Sotomayor, and Elena Kagan. Justice Antonin Scalia died on Feb. 13, 2016. President Obama nominated Merrick Garland as his replacement on March 16, 2016, but the U.S. Senate did not initiate the process for Garland’s approval. Majority Leader Mitch McConnell stated that the Senate would not approve a Scalia replacement until after a new president took office in January, 2017.

The Supreme Court justices are nominated by the President and confirmed by the U.S. Senate. Justices have life tenure unless they resign, retire, or are removed after impeachment. Although the justices do not represent or receive official endorsements from political parties, 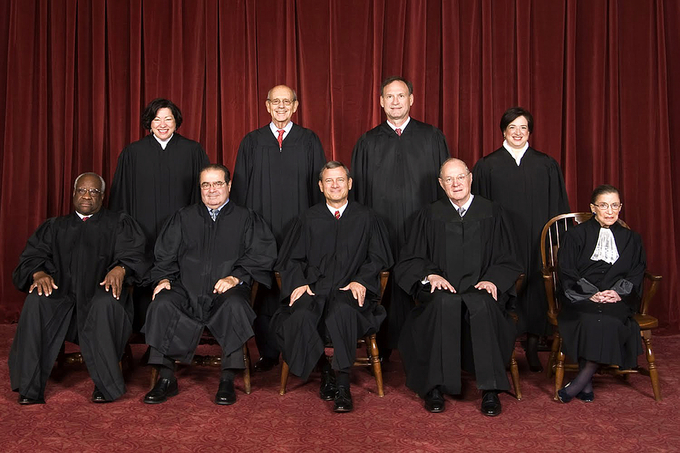 they are usually informally labeled as judicial conservatives, moderates, or liberals in their legal outlook.

Article III of the United States Constitution leaves it to Congress to fix the number of justices. Initially, The Judiciary Act of 1789 called for the appointment of six justices. But in 1866, at the behest of Chief Justice Chase, Congress passed an act providing that the next three justices to retire would not be replaced, which would thin the bench to seven justices by attrition. Consequently, one seat was removed in 1866 and a second in 1867. In 1869, however, the Circuit Judges Act returned the number of justices to nine, where it has since remained.

How Cases Reach the Supreme Court

The Supreme Court is the first court to hear certain kinds of cases in accordance with both Article III and the Eleventh Amendment of the Constitution. These cases include those between the United States and one of the states, those between two or more states, those brought by one state against citizens of another state or foreign country, and those involving foreign ambassadors or other ministers. However, only about 1% of the Supreme Court’s cases consist of these cases. Most cases reach the Supreme Court as appeals from civil and criminal cases that have been decided by state and lower federal courts.

To manage the high volume of cert petitions received by the Court each year, the Court employs an internal case management tool known as the “cert pool. ” Each year, the Supreme Court receives thousands of petitions for certiorari; in 2001 the number stood at approximately 7,500, and had risen to 8,241 by October Term 2007. The Court will ultimately grant approximately 80 to 100 of these petitions, in accordance with the rule of four.

Once a case is granted cert, lawyers on each side file a brief that presents their arguments. With the permission of the court, others with a stake in the outcome of the case may also file an amicus curiae brief for one of the parties to the case. After the briefs are reviewed, the justices hear oral arguments from both parties. During the oral argument the justices may ask questions, raise new issues, or probe arguments made in the briefs.

The justices meet in a conference some time after oral arguments to vote on a case decision. The justices vote in order of seniority, beginning with the Chief Justice. Cases are decided by majority rule in which at least five of the nine justices have to agree. Bargaining and compromise are often called for to create a majority coalition. Once a decision has been made, one of the justices will write the majority opinion of the Court. This justice is chosen by either the Chief Justice or by the justice in the majority who has served the longest in the Supreme Court. The Supreme Court cannot directly enforce its rulings. Instead, it relies on respect for the Constitution and the law for adherence to its decisions.