The Media and Political Campaigns

Political advertising is a form of campaigning used by political candidates to reach and influence voters.

Summarize the development of political advertisements on television and the Internet

Political advertising is a form of campaigning used by political candidates to reach and influence voters. It can include several different mediums and span several months over the course of a political campaign. Unlike the campaigns of the past, advances in media technology have streamlined the process, giving candidates more options to reach even larger groups of constituents with very little physical effort.

Political advertising has changed drastically over the last several decades. During the 1952 Presidential elections, Dwight D. Eisenhower was the first candidate to extensively utilize television commercials, creating forty twenty-second spots to answer questions from everyday Americans. During the 1960 elections, both candidates – Vice President Richard Nixon and Senator John F. Kennedy – utilized television, although Kennedy’s televised speech about his Catholic heritage and American religious tolerance is considered by many to be more memorable.

One of the first negative political advertisements was titled “The Daisy Girl” and was released by Lyndon Johnson’s campaign during the 1964 election. The commercial showed a young girl picking the petals off a daisy, while a voice off camera began a countdown to a nuclear explosion. The ad ended with an appeal to vote for Johnson, “because the stakes are too high for you to stay home.” Though the ad ran for under a minute and only aired once, it helped Johnson win the electoral votes of 44 states. Throughout the 1970s and 1980s, political attack ads became even more prevalent, with Presidents Nixon, Carter, Reagan and George H. W. Bush all utilizing the method against their opponents. 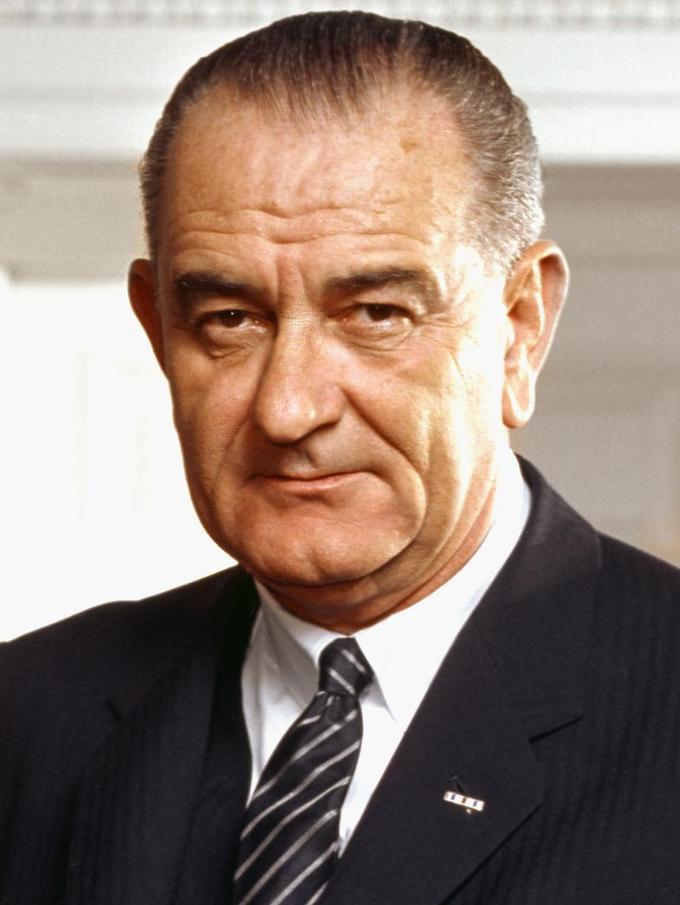 The growth of cable television networks heavily influenced political advertising in the 1992 election between incumbent President George H. W. Bush and Governor Bill Clinton, particularly in reaching new target demographics such as women and young voters. The 2004 election saw yet another, and possibly the biggest, change yet in political advertising–the growth of the Internet. Web-based advertising was easily distributed by both incumbent President George W. Bush and Senator John Kerry’s campaigns, and both campaigns hired firms who specialized in the accumulation of personal data. This resulted in advertisements which were tailored to target specific audiences for the first time (a process known as narrowcasting). The 2008 election was notable for Senator Barack Obama ‘s use of the Internet to communicate directly and personally with supporters and constituents, a tactic that would help in his eventual victory.

From 1960 onward, televised debates have become an important aspect of every presidential election. 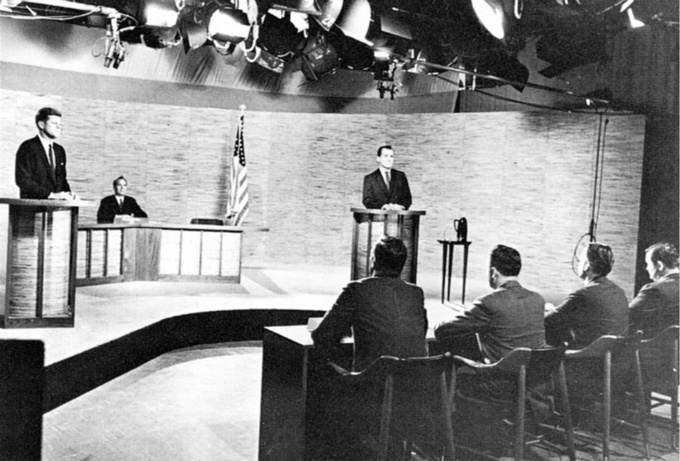 With an estimated 70 million viewers watching, the first Kennedy-Nixon debate demonstrated the impact of this new medium. During the debate, Nixon looked sickly, underweight and tired. In contrast, Kennedy appeared confident and relaxed. As a result, many of those who watched the debate unfold on television believed that Kennedy had won. For the remaining three debates, Nixon regained his lost weight, wore television makeup and appeared more forceful than his initial appearance.

Televised debates were a major factor again in 1980. Earlier in the election season, President Carter had a lead over opponent Governor Ronald Reagan. In the debates, with years of experience in front of a camera as an actor, Reagan came across much better than Carter. This would eventually help to propel Reagan to a landslide victory.It was not until 1976 that a second series of televised presidential debates was held during the general election campaign season. These debates, between Governor Jimmy Carter, the Democratic nominee, and Republican incumbent President Gerald Ford, also demonstrated their dramatic effect. Ford had already cut into Carter’s large lead in the polls, and was generally viewed as having won the first debate on domestic policy. However, in a second debate on foreign policy, Ford made what was widely viewed as a major blunder when he stated, “There is no  Soviet domination of Eastern Europe, and there never will be under a Ford administration. ” After this, Ford’s momentum stalled, and Carter won a very close election.

Name some of the central critiques of American news organizations

Media coverage strongly influences people’s perception of politics, society, and culture. The political analyst and consultant Gary Wasserman attests that media institutions’ “most important political function” is to play the role of an “agenda setter,” where they “[put] together an agenda of national priorities – what should be taken seriously, what lightly, what not at all. ”

Agenda-setting is somewhat limited within domestic politics. Due to the commercialized context within which they work, media institutions must compete for audience interest and can often not afford to ignore an important issue which another television station, newspaper, or radio station is willing to pick up. In regards to foreign policy, agenda-setting could take place in areas in which very few Americans have direct experience of the issues at hand. In addition, the U.S. media has been accused of prioritizing domestic news over international news, as well as focusing on U.S. military action abroad over other international stories.

American news media emphasizes more than ever the “horse race” aspects of the presidential campaign, according to a new study. Coverage of the political campaigns have been less reflective on the issues that matter to voters. Instead, the media has focused primarily on campaign tactics and strategy, according to a report conducted jointly by the Project for Excellence in Journalism, part of the Pew Research Center, and the Joan Shorenstein Center on the Press, Politics, and Public Policy at the Kennedy School of Government at Harvard University. The report examined 1,742 stories that appeared from January through May 2007 in 48 news outlets. Almost two-thirds of all stories in U.S. news media, including print, television, radio and online, focused on the political aspects of the campaign, while only one percent focused on the candidates ‘ public records. Only 12 percent of stories seemed relevant to voters’ decision-making. The rest of the stories focused more on tactics and strategy. Many criticize this shift in emphasis for depriving audiences of substantive information about candidates’ policy platforms. 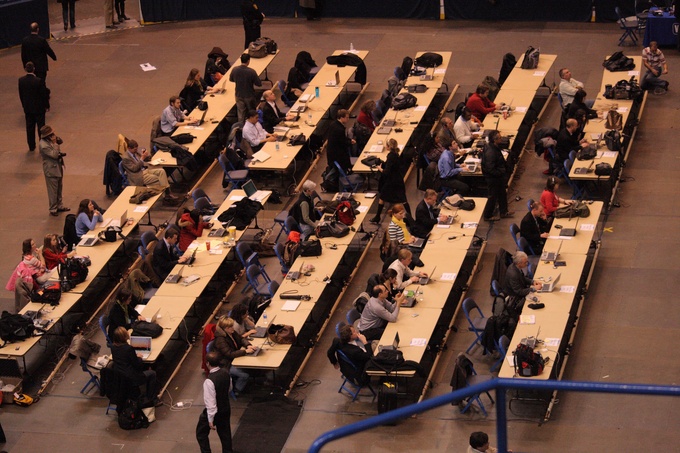 The Internet, Blogging, and Podcasting

The growth of the Internet and its associated technologies has made a profound impact on contemporary political campaigns.

The growth of the Internet and its associated technologies has had a profound impact on contemporary political campaigns.

The 2004 presidential election between incumbent President George W. Bush and Senator John Kerry was the first to heavily utilize web-based advertising, with advertisements tailored toward different target audiences. President Barack Obama ‘s victory in 2008 was partially attributed to his campaign’s use of direct communication through the Internet with supporters and constituents. When discussing the 2004 U.S. presidential election candidates, Carol Darr, director of the Institute for Politics, Democracy & the Internet at George Washington University in Washington, D.C., said of the candidates which benefited from use of the Internet to attract supporters: “They are all charismatic, outspoken mavericks and insurgents. Given that the Internet is interactive and requires an affirmative action on the part of the users, as opposed to a passive response from TV users, it is not surprising that the candidate has to be someone people want to touch and interact with. ” 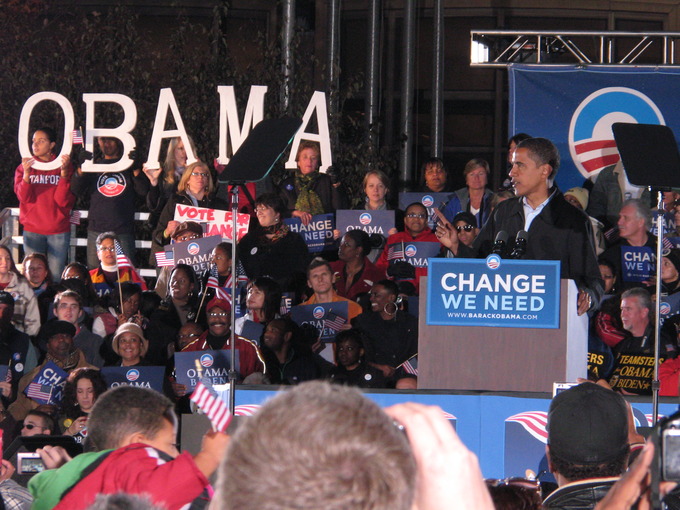 Campaigns and the internet: President Obama’s campaign, depicted here, relied heavily on the use of the internet. He used the internet to connect with his constituents and win votes.

Political blogs, generally a series of discrete posts about political issues in which readers may submit comments (thus reinforcing its interactive nature), have become prominent method of covering politics. Though the medium was often originally associated with individuals operating outside the formal political and media establishment, political blogs have unquestionably shaped the actions of political leadership and voter behavior. In the United States and many other countries, the most prominent bloggers have now become an accepted fixture in the political milieu.

Podcasts, a type of digital media consisting of an episodic series of audio, video, PDF, or ePub files subscribed to and downloaded through web syndication or streamed online to a computer or mobile device, have also become a popular way to convey political messages.

The Impact of the Internet on Political Campaigns

The internet is now a core element of modern political campaigns. Communication technologies such as e-mail, web sites, and podcasts for various forms of activism to enable faster communications by citizen movements and deliver a message to a large audience. These Internet technologies are used for cause-related fundraising, lobbying, volunteering, community building, and organizing. Individual political candidates are also using the internet to promote their election campaign. In a study of Norwegian election campaigns, politicians reported they used social media for marketing and for dialogue with voters. Facebook was the primary platform for marketing and Twitter was used for more continuous dialogue. However, despite the opening of communications brought by the internet, elections have become more expensive due to the inevitable reliance on high-tech for all purposes in a campaign.

Internet-based activism for a wide variety of political causes has also increased due to the growth of social media technologies such as Facebook, Twitter, and YouTube. These technologies enable faster communication by grassroots citizen movements and the delivery of local information to a large audience. For example, the Internet became the catalyst for protests such as the 2011 uprisings in Arab countries and the Occupy Wall Street movement in the United States, as those involved increasingly relied on social media to organize and stay connected.