Voting is the most quintessential form of political participation, although many eligible voters do not vote in elections.

Discuss the importance of voting as a process of political participation.

Voting is the most prominent form of political participation, and in fact, for many people, it is the primary means of participating in politics. A unique and special political act, voting allows for more people’s views to be represented than any other activity. Every citizen gets one vote that counts equally. Expanded voter registration means that more and more people have been able to participate, and voter turnout trends indicate how many people exercise their right to vote as a primary means of political participation. 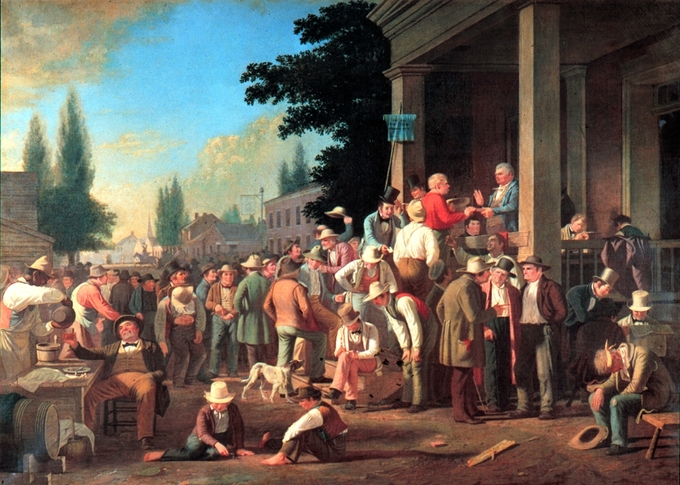 History of Voting in the United States: This painting from 1846 depicts a polling judge administering an oath to a voter. Since America’s founding, voting has been a primary avenue for citizen participation in politics.

In order to participate in voting, citizens must be registered. To register, citizens must meet eligibility requirements and have filed the necessary paperwork that permits them to vote in a given locality. Eligibility requirements require voters to be eighteen years of age, and states can enforce residency requirements that mandate the number of years a person must live in a place before being eligible to vote. The composition of the electorate has changed radically throughout American history. The pool of eligible voters has expanded from primarily white, male property owners at the founding, to include black men after the Civil War, women after 1920, and eighteen- to twenty-year-olds after 1971.

Voter registration laws were implemented in the 1860s by states and big cities to ensure that only citizens who met legal requirements could vote. Over time, residency requirements were relaxed. Beginning in the 1980s, some states, including Maine, Minnesota, and Wisconsin, made it possible for people to register on Election Day. Turnout in states that have Election Day registration averages ten points higher than in the rest of the country. The United States is one of the few democracies that requires citizens to register themselves rather than having the government take responsibility for automatically registering them.

Significant steps have been taken to make registration easier, and to ensure more people can participate in elections. In 1993, Congress passed the National Voter Registration Act of 1993, also known as the “motor voter” law, allowing citizens to register at motor vehicle and social service offices. “Motor voter’s” success in increasing the ranks of registered voters differs by state depending on how well the program is publicized and executed. Voter registration also has increased as a result of online registration. Rock the Vote (RTV), a nonpartisan youth mobilization organization, established the first online voter registration initiative in 1992 with official backing from the Congressional Internet Caucus. RTV registered over 2 million new voters in 1992, 80% of whom cast a ballot, and signed up over 2.5 million voters in 2008.

Over 90 percent of Americans agree with the principle that citizens have a duty to vote. Still, many people do not vote regularly. Social, cultural, and economic factors can keep people from voting, or sometimes barriers to voting are informal. The United States holds a large number of elections, each governed by specific rules and schedules. With so many elections, people can become overwhelmed, confused, or just plain tired of voting.

How many people actually participate in elections often depends on the type of election. A large number of elections are held in the United States every year, including local elections, elections for county and statewide offices, primaries, and general elections. Only a small number of people, generally under one-quarter of those eligible, participate in local, county, and state elections. Midterm elections, in which members of Congress run for office in nonpresidential-election years, normally draw about one-third of eligible voters. Young voters are less likely to turn out in midterm elections than older citizens. In 2010, only about 23 percent of eligible eighteen- to twenty-nine-year-olds cast a ballot. Voter turnout in presidential elections is generally higher than for lower-level contests; usually more than half the eligible voters cast a ballot. 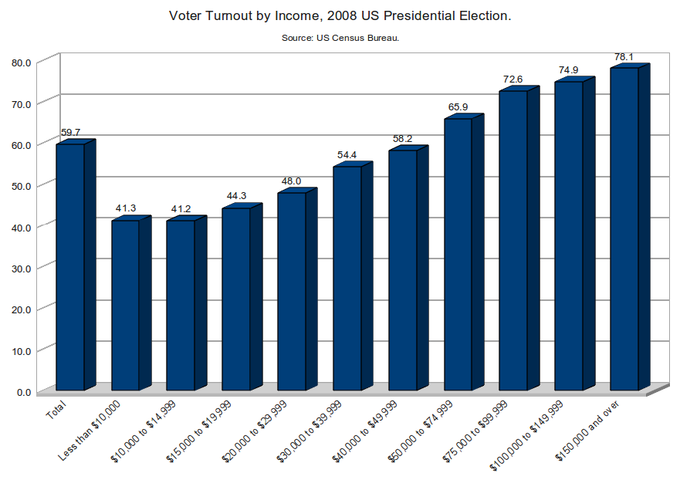 Voter turnout in the current era has not fluctuated much since voting participation during universal suffrage in 1920. Forty-nine percent of the voting-age public cast a ballot in the 1924 presidential contest, the same percentage as in 1996. Turnout in presidential elections in the 1960s was over 60 percent. More voters were mobilized during this period of political upheaval and people focused on issues of race relations, social welfare, and the Vietnam War. Turnout was lower in the 1980s and 1990s, when the political climate was less tumultuous. There has been a steady increase in turnout since the 2000 presidential election, in which 51 percent of the voting-age public cast a ballot. Turnout in the 2008 election was greater than usual, at 57 percent. 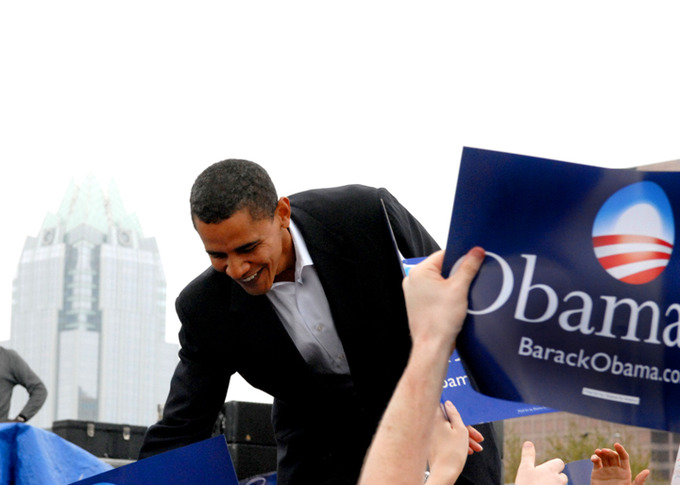 2008 Election: Participation in the 2008 presidential election was greater than usual, as people were motivated by the open race and the candidate choices.

Other Forms of Political Participation

Besides voting, there are many other ways to take part in politics, each involving varying amounts of skill, time, and resources.

Far more people participate in politics by voting than by any other means, yet there are many other ways to take part in politics.

Donating Money, Time, and Resources to a Campaign 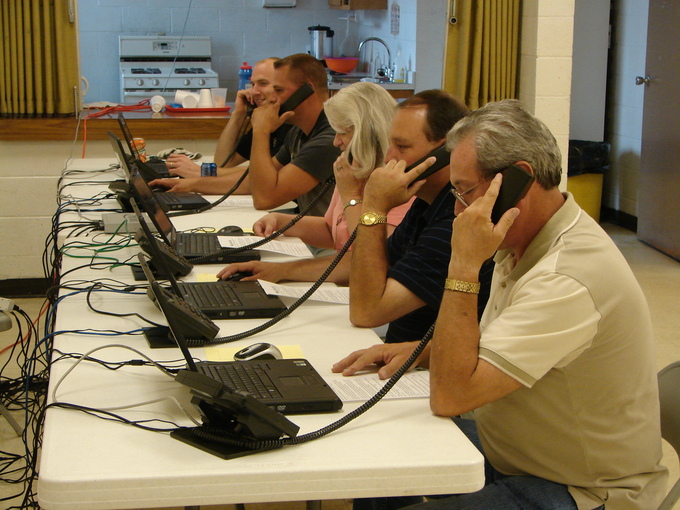 Participating in campaigns: Making phone calls during a campaign can be an important way for citizens to participate in politics.

The number of people who give money to a candidate, party, or political organization has increased substantially since the 1960s. Over 25 percent of the public gave money to a cause and 17 percent contributed to a presidential candidate in 2008. Direct mail and e-mail solicitations make fundraising easier, especially when donors can contribute through candidate and political-party websites. A positive side effect of fundraising campaigns is that people are made aware of candidates and issues through appeals for money.

During campaigns, people may work for political parties or candidates, organize campaign events, and discuss issues with family and friends. Generally, about 15 percent of Americans participate in these types of campaign activities in an election year. New media offer additional opportunities for people to engage in campaigns. People can blog or participate in discussion groups related to an election. They can use social media sites, like Facebook, to recruit supporters, advertise for campaign events, or encourage friends to donate money to a candidate.

Another avenue for political participation is running for office. Being a public official requires a great deal of dedication, time, energy, and money. About 3 percent of the adult population holds an elected or appointed public office.

Political protest activity represents another sphere of political participation. Protests involve unconventional, and sometimes unlawful, political actions that are undertaken to gain rewards from the political and economic system. Protest behavior can take many forms. People can engage in nonviolent acts of civil disobedience where they deliberately break a law that they consider to be unjust. This tactic was used effectively during the 1960s civil rights movement. Other forms of protest behavior include marking public spaces with graffiti, demonstrating, and boycotting. Extreme forms of protest behavior include acts that cause harm, like bombing a building or rioting. Members of social movements may resort to rioting when they perceive that there are no conventional alternatives for getting their message across. 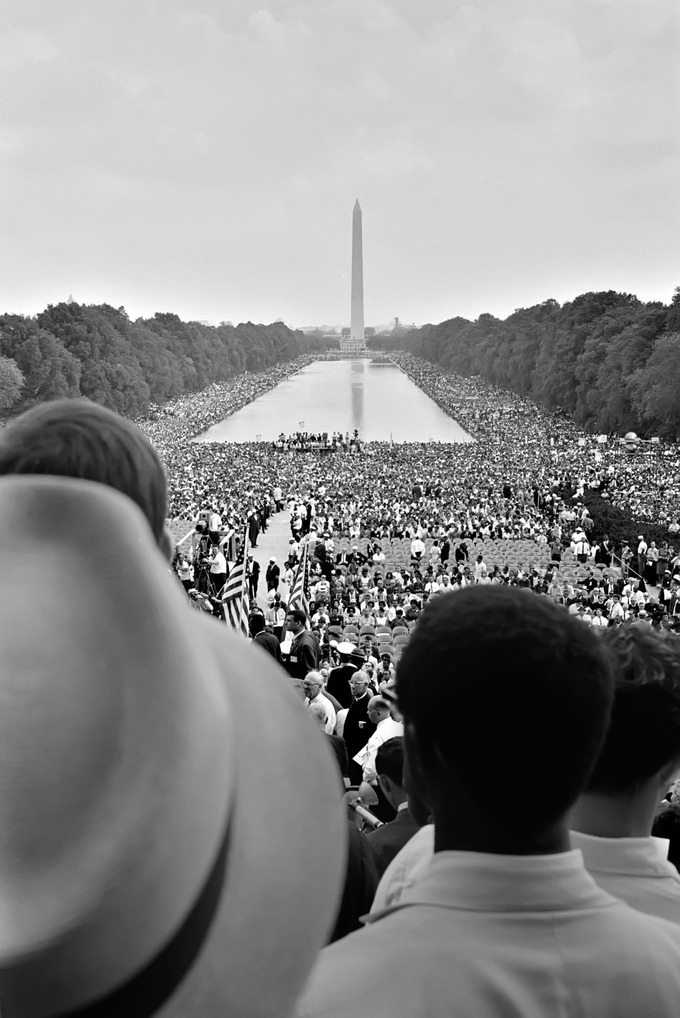 March on Washington for Jobs and Freedom, 1963: Interest groups may attempt to influence policy through public opinion campaigns, demonstrating that the electorate favors a particular policy stance.

Being a Part of Civil Society

About half the population takes part in national and community political affairs by joining an interest group, issue-based organization, civic organization, or political party. Organizations with the goal of promoting civic action on behalf of particular causes, or single-issue groups, have proliferated. These groups are as diverse as the People for the Ethical Treatment of Animals (PETA), which supports animal rights, to the Concord Coalition, which seeks to protect Social Security benefits.

Even activities that on the surface do not seem to have much to do with politics can be a form of political participation. Coaching a little league team, volunteering at a nursing home, or working at a homeless shelter all represent participation in civil society, the community of individuals who volunteer and work cooperatively outside of formal governmental institutions. Civil society depends on social networks, based on trust and goodwill, that form between friends and associates and allow them to work together to achieve common goals. Community activism is thriving among young people who realize the importance of service that directly assists others. Almost 70 percent of high school students and young adults aged eighteen to thirty report that they have been involved in community activities. 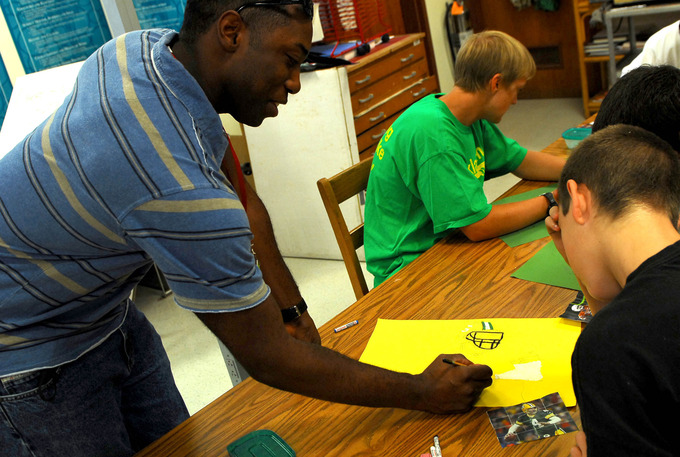 People also can take part in support activities, which are more passive forms of political involvement. They may attend concerts or participate in sporting events associated with causes, such as the “Race for the Cure” for breast cancer. These events are designed to raise money and awareness of societal problems, such as poverty and health care. Support activities can lead to active participation, as people learn about issues through these events and decide to become involved.

People also can engage in symbolic participation, routine or habitual acts that show support for the political system. People salute the flag and recite the pledge of allegiance at the beginning of a school day and they sing the national anthem at sporting events. Symbolic acts are not always supportive of the political system. For example, some people may refuse to vote to express their dissatisfaction with government.