Attention is a limited resource used to selectively concentrate on some information while ignoring other perceivable information.

Assess the implications of attention as a limited resource

Attention is the behavioral and cognitive process of selectively concentrating on a discrete stimulus while ignoring other perceivable stimuli. It is a major area of investigation within education, psychology, and neuroscience. Attention can be thought of as the allocation of limited processing resources: your brain can only devote attention to a limited number of stimuli. Attention comes into play in many psychological topics, including memory (stimuli that are more attended to are better remembered), vision, and cognitive load.

Generally speaking, visual attention is thought to operate as a two-stage process. In the first stage, attention is distributed uniformly over the external visual scene and the processing of information. In the second stage, attention is concentrated to a specific area of the visual scene; it is focused on a specific stimulus. There are two major models for understanding how visual attention operates, both of which are loose metaphors for the actual neural processes occurring.

The term “spotlight” was inspired by the work of William James, who described attention as having a focus, a margin, and a fringe. The focus is the central area that extracts “high-resolution” information from the visual scene where attention is directed. Surrounding the focus is the fringe of attention, which extracts information in a much more crude fashion. This fringe extends out to a specified area, and the cutoff is called the margin. 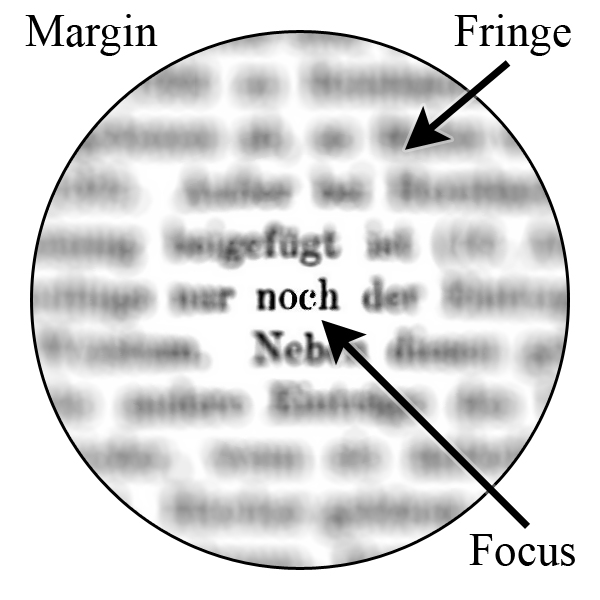 First introduced in 1986, this model inherits all the properties of the spotlight model, but it has the added property of changing in size. This size-change mechanism was inspired by the zoom lens one might find on a camera, and any change in size can be described by a trade-off in the efficiency of processing. The zoom-lens of attention can be described in terms of an inverse trade-off between the size of focus and the efficiency of processing. Because attentional resources are assumed to be fixed, the larger the focus is, the slower processing will be of that region of the visual scene, since this fixed resource will be distributed over a larger area.

Think of a computer with limited memory storage: you can only give it so many tasks before it is unable to process more. Brains work on a similar principle, called the cognitive load theory. “Cognitive load” refers to the total amount of mental effort being used in working memory. Attention requires working memory; therefore devoting attention to something increases cognitive load.

Multitasking can be defined as the attempt to perform two or more tasks simultaneously; however, research shows that when multitasking, people make more mistakes or perform their tasks more slowly. Each task increases cognitive load; attention must be divided among all of the component tasks to perform them.

Older research involved looking at the limits of people performing simultaneous tasks like reading stories while listening to and writing something else, or listening to two separate messages through different ears (i.e., dichotic listening). The vast majority of current research on human multitasking is based on performance of doing two tasks simultaneously, usually involving driving while performing another task such as texting, eating, and speaking to passengers in the vehicle or talking on a cell phone. This research reveals that the human attentional system has limits to what it can process: driving performance is worse while engaged in other tasks; drivers make more mistakes, brake harder and later, get into more accidents, veer into other lanes, and are less aware of their surroundings when engaged in the previously discussed tasks.

Studies show that if there are many stimuli present (especially if they are task-related), it is much easier to ignore the non-task-related stimuli, but if there are few stimuli the mind will perceive the irrelevant stimuli as well as the relevant.

Some people can process multiple stimuli with practice. For example, trained Morse-code operators have been able to copy 100% of a message while carrying on a meaningful conversation. This relies on the reflexive response that emerges from “overlearning” the skill of Morse-code transcription so that it is an autonomous function requiring no specific attention to perform.