EEG, PET, MRI, and fMRI scan the brain through a variety of methods and have varying degrees of specificity and invasiveness.

Compare the methods researchers can use to image the brain

Neuroimaging, or brain scanning, includes the use of various techniques to directly or indirectly image the structure, function, or pharmacology of the brain. It is a relatively new discipline within medicine, neuroscience, and psychology. Physicians who specialize in the performance and interpretation of neuroimaging in the clinical setting are known as neuroradiologists.

Four of the most common types of brain scans are EEG, PET, MRI, and fMRI.

Electroencephalography (EEG) is used to show brain activity in certain psychological states, such as alertness or drowsiness. It is useful in the diagnosis of seizures and other medical problems that involve an overabundance or lack of activity in certain parts of the brain.

To prepare for an EEG, electrodes are placed on the face and scalp. After placing each electrode in the right position, the electrical potential of each electrode can be measured. According to a person’s state (waking, sleeping, etc.), both the frequency and the form of the EEG signal differ. Patients who suffer from epilepsy show an increase of the amplitude of firing visible on the EEG record. The disadvantage of EEG is that the electric conductivity —and therefore the measured electrical potentials—may vary widely from person to person and also over time, due to the natural conductivities of other tissues such as brain matter, blood, and bones. Because of this, it is sometimes unclear exactly which region of the brain is emitting a signal. 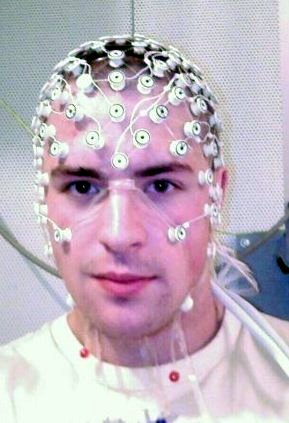 EEG recording: To prepare for an EEG, electrodes are placed on the face and scalp.

Positron emission tomography (PET) scans measure levels of the sugar glucose in the brain in order to illustrate where neural firing is taking place. This works because active neurons use glucose as fuel. As part of the scan, a tracer substance attached to radioactive isotopes is injected into the blood. When parts of the brain become active, blood (which contains the tracer) is sent to deliver oxygen. This creates visible spots, which are then picked up by detectors and used to create a video image of the brain while performing a particular task. However, with PET scans, we can only locate generalized areas of brain activity and not specific locations. In addition, PET scans are costly and invasive, making their use limited. However, they can be used in some forms of medical diagnosis, including for Alzheimer’s. 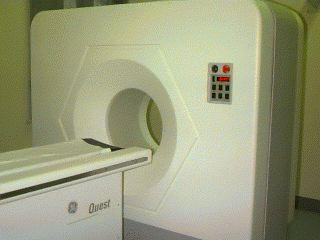 PET scanner: This is a view of the PET scanner from the outside; the radiation detectors are under the covering panel.

An MRI uses strong magnetic fields to align spinning atomic nuclei (usually hydrogen protons) within body tissues, then disturbs the axis of rotation of these nuclei and observes the radio frequency signal generated as the nuclei return to their baseline status. Through this process, an MRI creates an image of the brain structure. MRI scans are noninvasive, pose little health risk, and can be used on infants and in utero, providing a consistent mode of imaging across the development spectrum. One disadvantage is that the patient has to hold still for long periods of time in a noisy, cramped space while the imaging is performed. 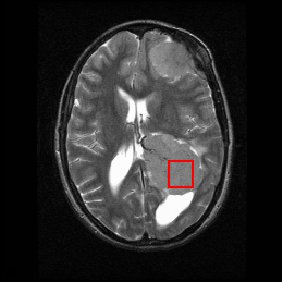 Brain MRI: MRI brain scan (in the axial plane—that is, slicing from front-to-back and side-to-side through the head) showing a brain tumor at the bottom right.

The fMRI is a series of MRIs that measures both the structure and the functional activity of the brain through computer adaptation of multiple images. Specifically, the fMRI measures signal changes in the brain that are due to changing neural activity. In an fMRI, a patient can perform mental tasks and the area of action can be detected through blood flow from one part of the brain to another by taking pictures less than a second apart and showing where the brain “lights up.” For example, when a person processes visual information, blood rushes to the back of the brain, which is where the occipital lobe is located. FMRIs make it possible to show when things happen, how brain areas change with experience, and which brain areas work together. They have been used to study a wide range of psychological phenomena, including (but by no means limited to) the neural activity of telling a lie, the differences between novices and experts when playing a musical instrument, and what happens inside our heads when we dream. 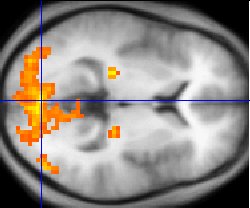 An fMRI of the brain: An fMRI scan showing regions of activation (in orange) including the primary visual cortex.