Ivan Pavlov’s research on classical conditioning profoundly informed the psychology of learning and the field of behaviorism.

Summarize the process of classical conditioning

Ivan Pavlov (1849–1936) was a Russian scientist whose work with dogs has been influential in understanding how learning occurs. Through his research, he established the theory of classical conditioning. 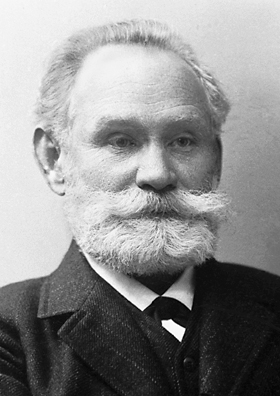 Ivan Pavlov: Pavlov is known for his studies in classical conditioning, which have been influential in understanding learning.

The best-known of Pavlov’s experiments involves the study of the salivation of dogs. Pavlov was originally studying the saliva of dogs as it related to digestion, but as he conducted his research, he noticed that the dogs would begin to salivate every time he entered the room—even if he had no food. The dogs were associating his entrance into the room with being fed. This led Pavlov to design a series of experiments in which he used various sound objects, such as a buzzer, to condition the salivation response in dogs.

If we look at Pavlov’s experiment, we can identify the four factors of classical conditioning at work: 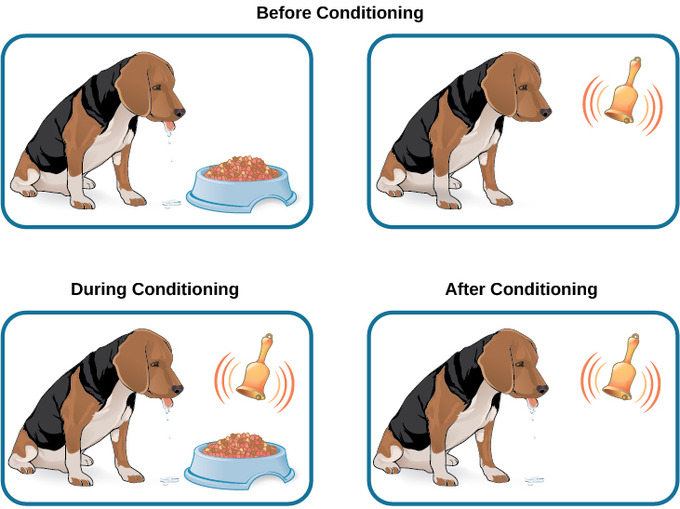 Consider how the conditioned response occurs in the brain. When a dog sees food, the visual and olfactory stimuli send information to the brain through their respective neural pathways, ultimately activating the salivation glands to secrete saliva. This reaction is a natural biological process as saliva aids in the digestion of food. When a dog hears a buzzer and at the same time sees food, the auditory stimulus activates the associated neural pathways. However, because these pathways are being activated at the same time as the other neural pathways, there are weak synapse reactions that occur between the auditory stimulus and the behavioral response. Over time, these synapses are strengthened so that it only takes the sound of a buzzer (or a bell) to activate the pathway leading to salivation.

Behaviorism and Other Research

Pavlov’s research contributed to other studies and theories in behaviorism, which is an approach to psychology interested in observable behaviors rather than the inner workings of the mind. The philosopher Bertrand Russell argued that Pavlov’s work was an important contribution to a philosophy of mind. Pavlov’s research also contributed to Hans Eysench’s personality theory of introversion and extroversion. Eysench built upon Pavlov’s research on dogs, hypothesizing that the differences in arousal that the dogs displayed was due to inborn genetic differences. Eysench then extended the research to human personality traits.

Pavlov’s research further led to the development of important behavior-therapy techniques, such as flooding and desensitizing, for individuals who struggle with fear and anxiety. Desensitizing is a kind of reverse conditioning in which an individual is repeatedly exposed to the thing that is causing the anxiety. Flooding is similar in that it exposes an individual to the thing causing the anxiety, but it does so in a more intense and prolonged way.

Research has demonstrated the effectiveness of classical conditioning in altering human behavior.

Apply the theories of classical conditioning to daily life

Since Ivan Pavlov’s original experiments, many studies have examined the application of classical conditioning to human behavior.

In the early 1900s, John B. Watson carried out a controversial classical conditioning experiment on an infant boy called “Little Albert.” Watson was interested in examining the effects of conditioning on the fear response in humans, and he introduced Little Albert to a number of items such as a white rat, a bunny, and a dog. Albert was originally not fearful of any of the items. Watson then allowed Albert to play with the rat, but as Albert played, Watson suddenly banged a hammer on a metal bar. The sound startled Albert and caused him to cry. Each time Albert touched the rat, Watson again banged the hammer on the bar. Watson was able to successfully condition Albert to fear the rat because of its association with the loud noise. Eventually, Albert was conditioned to fear other similar furry items such as a rabbit and even a Santa Claus mask. While Watson’s research provided new insight into conditioning, it would be considered unethical by the current ethical standards set forth by the American Psychological Association. 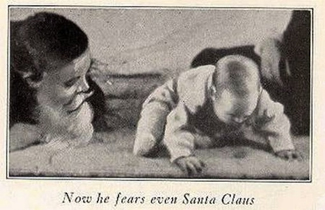 The influence of classical conditioning can be seen in responses such as phobias, disgust, nausea, anger, and sexual arousal. A familiar example is conditioned nausea, in which the sight or smell of a particular food causes nausea because it caused stomach upset in the past. Similarly, when the sight of a dog has been associated with a memory of being bitten, the result may be a conditioned fear of dogs.

As an adaptive mechanism, conditioning helps shield an individual from harm or prepare them for important biological events, such as sexual activity. Thus, a stimulus that has occurred before sexual interaction comes to cause sexual arousal, which prepares the individual for sexual contact. For example, sexual arousal has been conditioned in human subjects by pairing a stimulus like a picture of a jar of pennies with views of an erotic film clip. Similar experiments involving blue gourami fish and domesticated quail have shown that such conditioning can increase the number of offspring. These results suggest that conditioning techniques might help to increase fertility rates in infertile individuals and endangered species.

Classical conditioning has been used as a successful form of treatment in changing or modifying behaviors, such as substance abuse and smoking. Some therapies associated with classical conditioning include aversion therapy, systematic desensitization, and flooding. Aversion therapy is a type of behavior therapy designed to encourage individuals to give up undesirable habits by causing them to associate the habit with an unpleasant effect. Systematic desensitization is a treatment for phobias in which the individual is trained to relax while being exposed to progressively more anxiety -provoking stimuli. Flooding is a form of desensitization that uses repeated exposure to highly distressing stimuli until the lack of reinforcement of the anxiety response causes its extinction.

Classical conditioning is used not only in therapeutic interventions, but in everyday life as well. Advertising executives, for example, are adept at applying the principles of associative learning. Think about the car commercials you have seen on television: many of them feature an attractive model. By associating the model with the car being advertised, you come to see the car as being desirable (Cialdini, 2008). You may be asking yourself, does this advertising technique actually work? According to Cialdini (2008), men who viewed a car commercial that included an attractive model later rated the car as being faster, more appealing, and better designed than did men who viewed an advertisement for the same car without the model.