Differentiate between emotion and mood

As we move through our daily lives, we experience a variety of emotions (which we often call “feelings”). Emotions are subjective states of being that, physiologically speaking, involve physiological arousal, psychological appraisal and cognitive processes, subjective experiences, and expressive behavior. Emotions are often the driving force behind motivation (whether positive or negative) and are expressed and communicated through a wide range of behaviors, such as tone of voice and body language.

Our psychological appraisal of a situation is informed by our experiences, background, and culture. Therefore, different people may have different emotional experiences of similar situations. However, the ability to produce and recognize emotional facial expressions seems to be universal. That said, cultures differ in how often and under what circumstances it is “okay” to express various emotions, as well as how various expressions of emotions are interpreted. 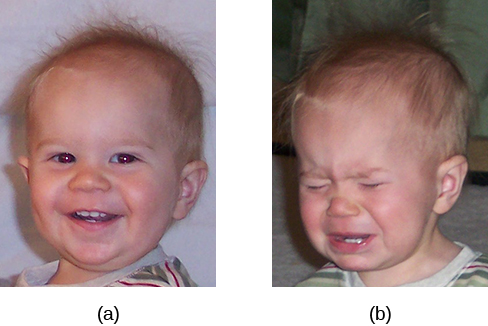 Expression of emotion: Toddlers can cycle through emotions quickly, being (a) extremely happy one moment and (b) extremely sad the next.

How emotions are experienced, processed, expressed, and managed is a topic of great interest in the field of psychology. Psychological research investigates the mental, physiological, and behavioral components of emotion as well as the underlying physiological and neurological processes.

The field of clinical psychology involves diagnosing and treating emotional disturbances and mental disorders that interfere with a person’s well-being and quality of life. In many instances, such treatment may involve emotion regulation, in which people use cognitive and behavioral strategies to influence their own emotional experience. Different theoretical approaches to psychotherapy may involve different strategies for emotion regulation.

The words emotion and mood are sometimes used interchangeably, but in the field of psychology they refer to two different things. Typically, the word emotion indicates a (generally conscious) subjective, affective state that is often intense and that occurs in response to a specific experience. Mood, on the other hand, refers to a prolonged, less intense affective state that does not necessarily occur in response to something we experience. Unlike emotions, mood states may not be consciously recognized (Beedie, Terry, Lane, & Devonport, 2011).

Emotions follow complex biological processes that include several bodily systems. The limbic system includes the amygdala and the hippocampus and functions as the brain’s emotional circuit. Both the amygdala and the hippocampus play a role in normal emotional processing as well as in mood and anxiety disorders. The autonomic nervous system (ANS) and reticular activating system (RAS) also play an important role in the experiencing and processing of emotions.

Over time, several different theories have been proposed to explain emotion. Among these are appraisal theory, the James–Lange theory, the Cannon–Bard theory, the Schachter–Singer theory, and the facial-feedback hypothesis.