Justify the need for ethical guidelines in psychological research

Psychological research involving human subjects must take into account many ethical considerations. Ethical guidelines that govern the use of human subjects in research are a fairly new but important construct; these ethical policies serve to minimize harm to human participant’s mental and physical well being during experimental research.

An early example of the discussion about ethics in research was the Nuremburg Code. The Nuremberg Trials were a series of 12 trials of men accused of committing war crimes and atrocities during World War II; among those on trial were doctors who had committed crimes against humanity such as involuntary human experimentation, involuntary sterilizations, and mass murder under the guise of euthanasia. One outcome of these trials was the Nuremberg Code, a list of principles for ethical experimentation that included informed consent, absence of coercion, and properly formulated scientific experimentation.

Throughout the 20th century, there were medical and psychological experiments carried out in the U.S. that generated controversy, then outrage, once they were revealed to the general public (often many years after their conclusion).

One of the most infamous instances of unethically-performed experiments was the Tuskegee experiment. From 1932 to 1972, the U.S. Public Health Service sought to study the natural progression of untreated syphilis in poor, rural black men who thought they were receiving free health care from the U.S. government. Out of the 600 men involved in the experiment, 399 had previously contracted syphilis before the study; they were never told they had syphilis, however, and were led to believe they were receiving free general medical care. One of the most unethical aspects of the experiment was that by 1947, penicillin was widely recognized as the standard treatment for syphilis. But the African American men involved in the experiment were not given the treatment that could cure them, and continued to be studied for 25 years after a cure had been found. By the end of the study in 1972, only 74 of the test subjects were still alive.

The 1971 Stanford prison experiment was a study regarding the psychological effects of becoming a prisoner or prison guard. The participants adapted to their roles well beyond expectations, as the guards enforced authoritarian measures, and ultimately subjected some of the prisoners to psychological torture. Many of the prisoners passively accepted psychological abuse and, at the request of the guards, readily harassed other prisoners who attempted to prevent it. The experiment even affected the head researcher himself, who, in his role as the superintendent, permitted the abuse to continue until the experiment ended after only six days. Both guards and prisoners stepped beyond the boundaries of predicted behavior, leading to dangerous and psychologically damaging situations.

As a result of these and other unethical research studies, many organizations have been put in place to help monitor clinical research involving humans. Such organizations include the National Commission for the Protection of Human Subjects of Biomedical and Behavioral Research, and the Office for Human Research Protections. At most colleges and universities, ethics committees called institutional review boards (IRBs) are formally chosen to approve, review, and monitor bio-medical and behavioral research involving humans. IRBs often conduct some form of risk-benefit analysis in an attempt to determine whether or not research should be done, and must approve any experiments done within the organizations they represent.

To protect the rights and well-being of research participants, and at the same time discover meaningful results and insights into human behavior, virtually all psychological research must pass an ethical review process. At most colleges and universities, this is conducted by the IRB. This group examines the proposed research to make sure that no harm is done to the participants, and that the benefits of the study outweigh any possible risks or discomforts to people taking part in the study. Minors are more protected than adults in ethical guidelines, because a minor is not considered to be able to give fully informed consent. 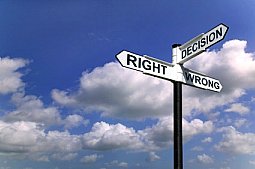 Right or wrong decision: Ethical guidelines help researchers make the right decisions, such as getting informed consent from human subjects.

There is a duty to protect the rights of people in the study as well as their privacy and sensitivity. The confidentiality of those involved in the study must be maintained, keeping their anonymity and privacy secure. A process of informed consent is used to make sure that volunteers know what will happen in the experiment and understand that they are allowed to quit the experiment at any time. Also, a debriefing is typically done at the conclusion of the experiment in order to reveal any deceptions used and generally make sure that the participants are unharmed by the procedures. Today, most research in social psychology involves no more risk of harm than can be expected as by routine psychological testing or normal daily activities.

Animal research raises the controversial question of whether it is ethical to harm animals with the aim of improving human lives.

The use of animals in research is a very controversial topic in today’s scientific community. While animal research was once common and unquestioned, it now raises an important ethical issue: is it ethical to harm animals with the aim of improving human lives? An experiment’s design and application must be ethical whether the research subjects are humans or animals, but how “ethical” is defined across species is the subject of much debate.

A key difference between an animal and a human is that animals cannot provide informed consent to participate in an experiment because they cannot understand the risks or consequences of the experiment. While a person can consent to participate in research after being informed of an experiment’s goals and methods (and in fact this is a mandatory guideline for ethical research among humans), this is not possible for animals, which raises complicated questions about ethics.

Two main questions about the ethics of animal testing are whether animals have rights and, if they do, whether those rights should be protected. A legal right is a law-based entitlement that applies to all members of a particular group and is upheld by the justice system. Those in favor of extending equal rights to animals argue that the suffering and well-being of other species are just as important as the suffering and well-being of humans and should be treated accordingly. It is known that animals can feel pain and distress, and therefore many consider the act of subjecting animals to pain, injury, or death for the sake of science to be immoral.

Others argue against extending equal rights to animals, positing that human interest should be placed above the well-being of animals. Many argue that animal research has yielded substantial benefits to the human race, and that these outweigh the negative effects on animals.

The Animal Welfare Act (AWA) of 1966 is the only federal law in the United States regulating the treatment of animals in research; while some other laws and policies may include additional species coverage or specifications for animal care and use, all refer to the AWA as the minimally acceptable standard for animal treatment and care. Some of the animals covered under the AWA include any live or dead cat, dog, hamster, rabbit, nonhuman primate, or guinea pig. Animals excluded from this act are birds, rats, mice, farm animals, and cold-blooded animals.

Under the AWA, all animal dealers must be registered and licensed, and all animal testing facilities in compliance with this act are required to establish a special committee that includes at least one person trained as a veterinarian and one person who is not affiliated with the facility. These committees regularly assess animal care, treatment, and practices during research. In addition to compliance with the Animal Welfare Act, most research institutions have an institutional review board (IRB), which is a committee that has been formally designated to approve, monitor, and review biomedical and behavioral research involving humans. Most studies involving humans must pass IRB approval before they can begin.

A variety of animals are used in experiments. While animals with shorter life spans and less sophisticated nervous systems tend to be used, this is not always true. Some advocate that there should be a hierarchy of animal rights, with more rights granted to sophisticated species, while others argue that the same rights should be awarded to all living beings. 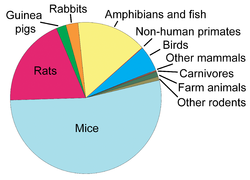 Animal Testing by the Numbers: The proportion of animals used in research testing in Europe in 2005. Mice and rats were the most frequently used animals.

Replacement, reduction, and refinement (also referred to as “the three Rs”) exist as guiding principles for more ethical use of animals in testing and research. These guidelines are intended to improve animal welfare and scientific quality where the use of animals in experimentation cannot be avoided and are implemented in many research labs worldwide. Replacement refers to the preferred use of non-animal methods whenever it is possible to achieve the same scientific goals as animal research. Reduction refers to methods that enable researchers to obtain comparable levels of information from fewer animals, or to obtain more information from the same number of animals. Methods of experimental refinement aim to alleviate or minimize potential pain, suffering, or distress and enhance the welfare of the animals used.