Influence of Culture on Emotion

Influence of Culture on Emotion

Culture can have a profound impact on the way in which people display, perceive, and experience emotions.

Give examples of universal vs. culturally dependent aspects of emotional expression

Culture—i.e., the beliefs, values, behavior, and material objects that constitute a people’s way of life—can have a profound impact on how people display, perceive, and experience emotions. The culture in which we live provides structure, guidelines, expectations, and rules to help us understand and interpret various emotions.

A cultural display rule dictates the types and frequencies of emotional displays considered acceptable within a certain culture (Malatesta & Haviland, 1982). These rules may also guide how people choose to regulate their emotions, ultimately influencing an individual’s emotional experience and leading to general cultural differences in the experience and display of emotion.

For example, in many Asian cultures, social harmony is prioritized over individual gain, whereas Westerners in much of Europe and the United States prioritize individual self-promotion. Research has shown that individuals from the United States are more likely to express negative emotions such as fear, anger, and disgust both alone and in the presence of others, while Japanese individuals are more likely to do so only while alone (Matsumoto, 1990). Furthermore, individuals from cultures that tend to emphasize social cohesion are more likely suppress their own emotional reaction in order to first evaluate what response is most appropriate given the situation (Matsumoto, Yoo, & Nakagawa, 2008).

Cultures also differ in the social consequences that they assign to different emotions: in the United States, men are often directly or indirectly ostracized for crying; in the Utku Eskimo population, the expression of anger can result in social ostracism.

Within a particular culture, different rules may also be internalized as a function of an individual’s gender, class, family background, or other factor. For instance, there is some evidence that men and women may differ in the regulation of their emotions, perhaps due to culturally based gender norms and expectations (McRae, Ochsner, Mauss, Gabrieli, & Gross, 2008).

In everyday life, information from the environment influences our understanding of what facial expressions mean. In much the same way, cultural context also acts as a cue when people are trying to interpret facial expressions. People can attend to only a small number of the available cues in their complex and continuously changing environments, and increasing evidence suggests that people from different cultural backgrounds allocate their attention very differently. This means that people from different cultures may interpret the same social context in very different ways. 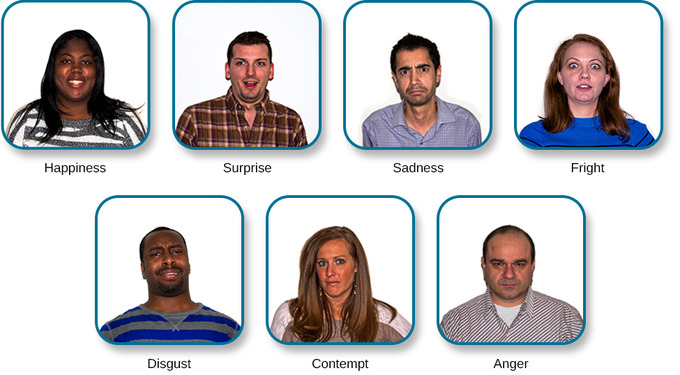