Introduction to the Process and Types of Memory

Memory is the ability to take in information, encode it, store it, and retrieve it at a later time.

Memory is the ability to take in information, store it, and recall it at a later time. In psychology, memory is broken into three stages: encoding, storage, and retrieval. 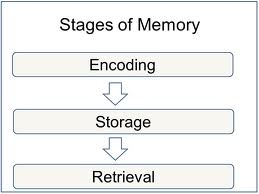 Problems can occur at any stage of the process, leading to anything from forgetfulness to amnesia. Distraction can prevent us from encoding information initially; information might not be stored properly, or might not move from short-term to long-term storage; and/or we might not be able to retrieve the information once it’s stored.

Short-term memory is also known as working memory. It holds only a few items (research shows a range of 7 +/- 2 items) and only lasts for about 20 seconds. However, items can be moved from short-term memory to long-term memory via processes like rehearsal. An example of rehearsal is when someone gives you a phone number verbally and you say it to yourself repeatedly until you can write it down. If someone interrupts your rehearsal by asking a question, you can easily forget the number, since it is only being held in your short-term memory.

Long-term memories are all the memories we hold for periods of time longer than a few seconds; long-term memory encompasses everything from what we learned in first grade to our old addresses to what we wore to work yesterday. Long-term memory has an incredibly vast storage capacity, and some memories can last from the time they are created until we die.

There are many types of long-term memory. Explicit or declarative memory requires conscious recall; it consists of information that is consciously stored or retrieved. Explicit memory can be further subdivided into semantic memory (facts taken out of context, such as “Paris is the capital of France”) and episodic memory (personal experiences, such as “When I was in Paris, I saw the Mona Lisa“).

In contrast to explicit/declarative memory, there is also a system for procedural/implicit memory. These memories are not based on consciously storing and retrieving information, but on implicit learning. Often this type of memory is employed in learning new motor skills. An example of implicit learning is learning to ride a bike: you do not need to consciously remember how to ride a bike, you simply do. This is because of implicit memory.