Numerous factors influence the multifaceted ways in which love and attraction are felt and expressed.

Diagram and explain Sternberg’s triangular theory of love and attraction

A major area in the study of people’s relations to each other is interpersonal attraction. This refers to all of the forces that lead people to like each other, establish relationships, and in some cases, fall in love. Several general principles of attraction have been discovered by social psychologists. For example, physical proximity increases the likelihood of attraction, whereas long distances make relationships difficult to form and maintain. Even very small differences in distance—such as down the block compared to next door—can make a significant difference in friendship patterns. To be clear, just being near someone does not ensure attraction: there has to be a positive association to begin with. For instance, let’s say you are attracted to someone who plays for your school’s soccer team, who you see only from a distance during the occasional game, and equally attracted to someone who you have a class with every other day. You are more likely to end up being more attracted to the person in your class, even if the initial attraction to both individuals was the same. The physical proximity increases the already-existing physical attraction.

Familiarity, or “mere exposure,” also increases attraction, influencing people even if the familiarity is not consciously noticed. For example, if two individuals meet in New York City and realize they both come from the same city in California, they are more likely to be attracted to one another. The familiarity increases comfort, which in turn increases the probability of attraction and love.

One of the most important factors in interpersonal attraction is similarity: the more similar two people are in attitudes, background, and other traits, the more probable it is that they will like each other. Contrary to popular belief, opposites do not usually attract. Physical attractiveness is an important element in romantic relationships, particularly in the early stages, which are characterized by high levels of passion. Later on, similarity and other compatibility factors become more important.

Psychologist Robert Sternberg views love as a triangle whose three sides consist of passion, intimacy, and commitment. When two people share all three, they are said to be in a state of consummate love; this condition is relatively rare and difficult to maintain for a long period of time. Love can be best described in reference to a relationship between two or more people, and is more evident in relationships that contain a mutual understanding, mutual support, and enjoyment of each other’s company.

Sternberg’s triangular theory of love: According to Sternberg, love consists of three components: passion (infatuation), commitment (companionship), and intimacy (liking). Having all three of these components is referred to as consummate love.

Companionate love, on the other hand, is best defined as passionate love that has settled to a warm enduring love between partners in a relationship; in Sternberg’s terms, it is comprised of intimacy and commitment. Often found in long-term relationships, the companionate love shared between partners consists of fewer ups and downs than does passionate love. It is more stable and involves a deeper respect and affectionate attachment between partners. While the passion may have died down over time, a deep affection and commitment for the other person still remains.

Romantic love derives from a combination of the intimate and passionate components of love. Romantic lovers are bonded both intimately and passionately, but without sustaining commitment. Fatuous love is both passionate and committed, but lacks the stability that intimacy brings to relationships. It is termed fatuous because the commitment is made on the basis of passion alone.

Factors That Affect the Expression of Love

Love assumes many forms, and time and culture both have an effect on the love formed in a relationship. Time factors include the age or developmental stage of the individuals involved in the relationship, the length of the relationship, and/or the age difference between the partners. Culture plays a strong role in love and relationships. An individual’s ethnicity, background, religion, or even financial stability can affect the way he or she expresses or receives love in a relationship. From an evolutionary point of view, both passionate and companionate love are adaptive: the former because it increases the likelihood of procreating, and the latter because it increases the likelihood of a long-term relationship and joint-parenting, which probably increases children’s chances of survival.

“Aggression” describes a range of behaviors that are intended to cause harm to others; aggression may be physical, mental, or verbal, and varies according to cultural factors.

Aggression is defined by psychologists as a range of behaviors that are intended to cause harm to others. While those behaviors often stem from anger, they can take root at a range of emotions such as jealousy, fear, or sadness, to name a few. Because the terms “aggression” and “violence” are used interchangeably in daily language, it is important to distinguish aggression from violence. Both aggression and violence can be physical, mental, or verbal. Violence, however, is an extreme expression of anger. Violence is defined as the enactment of aggression; it is an assault with intent to harm or injure others. Not all aggression leads to violence.

Research indicates that there are many factors that impact aggression, including biological factors (such as testosterone) and environmental factors (such as social learning ). Empirical cross-cultural research has also found differences in the levels of aggression in different cultures. In one study, American men resorted to physical aggression more readily than Japanese or Spanish men, whereas Japanese men preferred direct verbal conflict more than their American and Spanish counterparts (Andreu et al., 1998). Within American culture, southerners were shown to become more emotionally aroused and to respond more aggressively than northerners when affronted (Bowdle et al., 1996).

Some attribute the higher rates of physical aggression in the U.S. to the competitive instrumental aggression inherent in capitalism. The idea behind this thought is that capitalism is a system driven by private owners for profit, and getting ahead in this kind of system sometimes requires aggressive tactics.

A person’s beliefs about the social acceptability of aggression (called normative beliefs) are major predictors of their behavior. For example, people’s beliefs about the acceptability of violence against Jewish people in Pakistan predicted whether they would join an extremist group. Normative beliefs vary from culture to culture, and may partially explain cultural differences in aggression towards certain groups.

Some people suggest that aggression can be learned through observation, such as in Albert Bandura’s cornerstone experiment, where children imitated the aggressive behavior toward a Bobo doll that was initially displayed by an experimenter. However, these conclusions have come under recent scrutiny. While it is debatable whether aggression can be learned through social learning (Gauntlett, 1995), or whether violence in media leads to higher rates of aggression (Fanti et al., 2009), there is evidence that suggests that repeated exposure to violence may desensitize individuals to later violence (Sparks, Sparks, & Sparks, 2008).

In psychological research about gender, the general pattern is that women are more likely to internalize, and men are more likely to externalize. This pattern holds true for aggression and violence. Men are more physically aggressive than women, which explains, in part, why they are responsible for the vast majority of murders committed in the United States (Buss, 2005). This sex difference has been noted across ages and cultures. In contrast, women are more likely to be indirectly and non-physically aggressive, such as in displays of relational aggression and social rejection. Whether this sex difference in aggression is a result of nature (such as biology, genetics, or hormonal differences) or nurture (such as gender roles and socialization) continues to be debated. 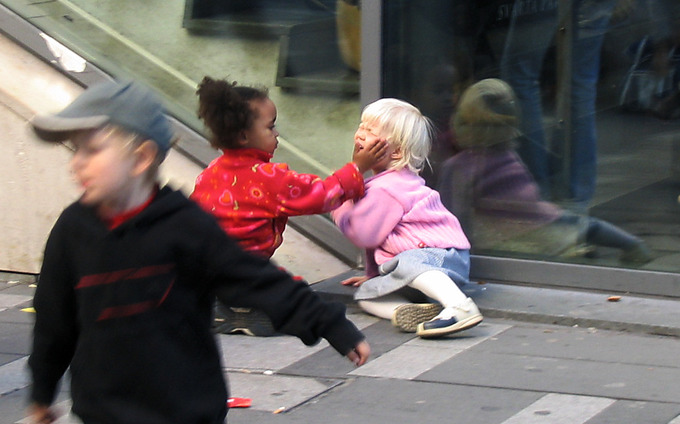 Altruism, often referred to as selflessness, is the principle or practice of concern for the welfare of others.

Distinguish among the social-exchange theory, the reciprocity norm, and the empathy-altruism hypothesis of altruism

Voluntary behavior with the intent to help other people is known as prosocial behavior. Specifically, altruism is the desire to help others even if the costs outweigh the benefits of helping. For example, news accounts of the 9/11 terrorist attacks on the World Trade Center in New York reported that an employee in the first tower helped his coworkers make it to the exit stairwell and then went back into the burning building to help more people. In this case the costs of helping were great, and the hero lost his life in the destruction (Stewart, 2002).

The social-exchange theory argues that altruism only exists when the benefits outweigh the costs—i.e., when your behavior helps you even more than it helps the other person. The theory is based on the idea that all human relationships are formed through the use of this subjective cost-benefit analysis and the comparison of alternatives. The potential benefits from a relationship can be tangible, such as food, money, gifts, or housing. They can also be intangible, like support, love, fun, and companionship. According to the social-exchange theory, when the risks or costs of a relationship outweigh the benefits, the relationship is abandoned or ended.

The empathy-altruism hypothesis states that psychological altruism does exist and is evoked by the empathic desire to help someone who is suffering. People with empathic concern help others in distress even when exposure to the situation could be easily avoided, whereas those lacking in empathic concern avoid helping unless it is difficult or impossible to avoid. 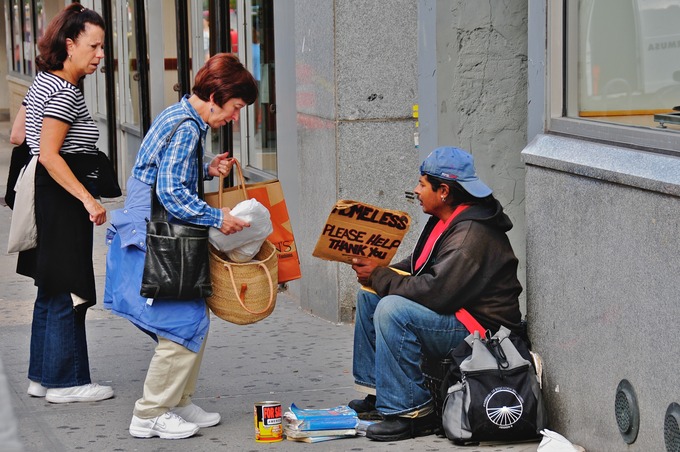 Altruism: Helping the homeless can be an example of empathic altruism or social responsibility—the helper doesn’t get anything in return.

Empathic concern is thought to emerge in later developmental years, though research indicates that children as young as two years of age are able to interpret the psychological and affective states of others, and have some access to the knowledge of how to alleviate emotional discomfort. Developmental psychologists suggest that both personal disposition (temperament) and social context contribute to individual differences in empathic concern.

Reciprocity involves an exchange of positive actions between people. It is the give and take in relationships. We contribute to relationships, but we expect to receive benefits as well; we want our relationships to be a two-way street.

Reciprocal actions are important to social psychology as they can help explain the maintenance of social norms. The human tendency toward reciprocity is so strong that a person will feel obligated to return a favor regardless of whether they like the person who originally gave the favor, and even if they did not want the favor.