Memory encoding allows an item of interest to be converted into a construct that is stored in the brain, which can later be recalled.

Memory encoding allows information to be converted into a construct that is stored in the brain indefinitely. Once it is encoded, it can be recalled from either short- or long-term memory. At a very basic level, memory encoding is like hitting “Save” on a computer file. Once a file is saved, it can be retrieved as long as the hard drive is undamaged. “Recall” refers to retrieving previously encoded information.

The process of encoding begins with perception, which is the identification, organization, and interpretation of any sensory information in order to understand it within the context of a particular environment. Stimuli are perceived by the senses, and related signals travel to the thalamus of the human brain, where they are synthesized into one experience. The hippocampus then analyzes this experience and decides if it is worth committing to long-term memory.

Encoding is achieved using chemicals and electric impulses within the brain. Neural pathways, or connections between neurons (brain cells), are actually formed or strengthened through a process called long-term potentiation, which alters the flow of information within the brain. In other words, as a person experiences novel events or sensations, the brain “rewires” itself in order to store those new experiences in memory.

The four primary types of encoding are visual, acoustic, elaborative, and semantic.

Visual encoding is the process of encoding images and visual sensory information. The creation of mental pictures is one way people use visual encoding. This type of information is temporarily stored in iconic memory, and then is moved to long-term memory for storage. The amygdala plays a large role in the visual encoding of memories.

Acoustic encoding is the use of auditory stimuli or hearing to implant memories. This is aided by what is known as the phonological loop. The phonological loop is a process by which sounds are sub-vocally rehearsed (or “said in your mind over and over”) in order to be remembered.

Semantic encoding involves the use of sensory input that has a specific meaning or can be applied to a context. Chunking and mnemonics (discussed below) aid in semantic encoding; sometimes, deep processing and optimal retrieval occurs. For example, you might remember a particular phone number based on a person’s name or a particular food by its color.

Not all information is encoded equally well. Think again about hitting “Save” on a computer file. Did you save it into the right folder? Was the file complete when you saved it? Will you be able to find it later? At a basic level, the process of encoding faces similar challenges: if information is improperly coded, recall will later be more challenging. The process of encoding memories in the brain can be optimized in a variety of ways, including mnemonics, chunking, and state-dependent learning.

Mnemonic devices, sometimes simply called mnemonics, are one way to help encode simple material into memory. A mnemonic is any organization technique that can be used to help remember something. One example is a peg-word system, in which the person “pegs” or associates the items to be remembered with other easy-to-remember items. An example of this is “King Phillip Came Over For Good Soup,” a peg-word sentence for remembering the order of taxonomic categories in biology that uses the same initial letters as the words to be remembered: kingdom, phylum, class, order, family, genus, species. Another type of mnemonic is an acronym, in which a person shortens a list of words to their initial letters to reduce their memory load.

Memory consolidation is a category of processes that stabilize a memory trace after its initial acquisition. Like encoding, consolidation influences whether the memory of an event is accessible after the fact. However, encoding is more influenced by attention and conscious effort to remember things, while the processes involved in consolidation tend to be unconscious and happen at the cellular or neurological level. Generally, encoding takes focus, while consolidation is more of a biological process. Consolidation even happens while we sleep.

Research indicates that sleep is of paramount importance for the brain to consolidate information into accessible memories. While we sleep, the brain analyzes, categorizes, and discards recent memories. One useful memory-enhancement technique is to use an audio recording of the information you want to remember and play it while you are trying to go to sleep. Once you are actually in the first stage of sleep, there is no learning occurring because it is hard to consolidate memories during sleep (which is one reason why we tend to forget most of our dreams). However, the things you hear on the recording just before you fall asleep are more likely to be retained because of your relaxed and focused state of mind.

The Role of Attention in Memory

In order to encode information into memory, we must first pay attention, a process known as attentional capture.

Discuss the link between attentional capture and working memory

Explicit attentional capture is when a stimulus that a person has not been attending to becomes salient enough that the person begins to attend to it and becomes cognizant of its existence. Very simply, it’s when something new catches your focus and you become aware of and focused on that new stimulus. This is what happens when you are working on your homework and someone calls your name, drawing your complete attention.

Implicit attentional capture is when a stimulus that a person has not been attending to has an impact on the person’s behavior, whether or not they’re cognizant of that impact or the stimulus. If you are working on your homework and there is quiet but annoying music in the background, you may not be aware of it, but your overall focus and performance on your homework might be affected. Implicit attentional capture is important to understand when driving, because while you might not be aware of the effect a stimulus like loud music or an uncomfortable temperature is having on your driving, your performance will nevertheless be affected. 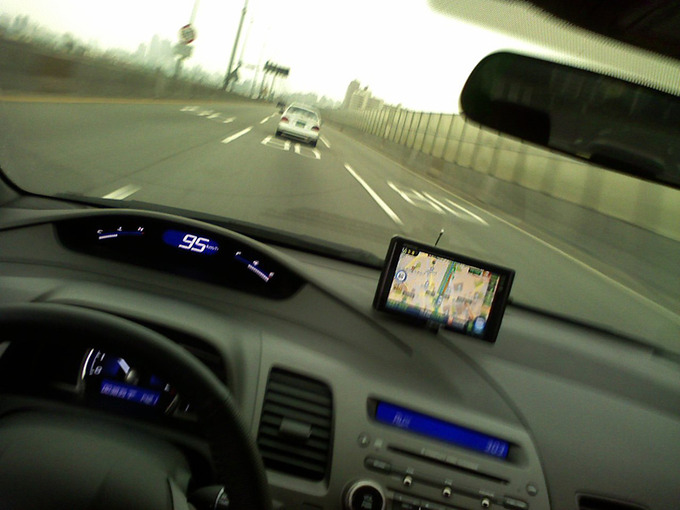 Implicit attentional capture: Even when you are focused on driving, your attention may still implicitly capture other information, such as movement on the GPS screen, which can affect your performance.

One famous example of attentional capture is the cocktail party effect, which is the phenomenon of being able to focus one’s auditory attention on a particular stimulus while filtering out a range of other stimuli, much the same way that a partygoer can focus on a single conversation in a noisy room. This effect is what allows most people to tune into a single voice and tune out all others.

Research suggests a close link between working memory and attentional capture, or the process of paying attention to particular information. A person pays attention to a given stimulus, either consciously (explicitly, with awareness) or unconsciously. This stimulus is then encoded into working memory, at which point the memory is manipulated either to associate it with another familiar concept or with another stimulus within the current situation. If the information is deemed important enough to store indefinitely, the experience will be encoded into long-term memory. If not, it will be forgotten with other unimportant information. There are several theories to explain how certain information is selected to be encoded while other information is discarded.

The formerly accepted filter model proposes that this filtering of information from sensory to working memory is based on specific physical properties of stimuli. For every frequency there exists a distinct nerve pathway; our attention selects which pathway is active and can thereby control which information is passed to the working memory. This way it is possible to follow the words of one person with a certain vocal frequency even though there are many other sounds in the surrounding area.

Attenuation theory differs from late-selection theory, which proposes that all information is analyzed first and judged important or unimportant later; however, this theory is less supported by research.

Levels-of-processing theory looks at not only how a person receives information, but also what they do with that information.

Differentiate among the different levels of processing

Levels-of-processing theory looks at not only how a person receives information, but what the person does with the information after it is received and how that affects overall retention. Fergus Craik and Robert Lockhart determined that memory does not have fixed stores of space; rather, there are several different ways a person can encode and retain data in his or her memory. The consensus was that information is easier to transfer to long-term memory when it can be related to other memories or information the person is familiar with.

There are three levels of processing for verbal data: structural, phonetic, and semantic. These levels progress from the most shallow (structural) to the deepest (semantic). Each level allows a person to make sense of the information and relate it to past memories, determining if the information should be transferred from the short-term memory to the long-term memory. The deeper the processing of information, the easier it is to retrieve later.

Structural processing examines the structure of a word—for example, the font of the typed word or the letters within in it. It is how we assess the appearance of the words to make sense of them and provide some type of simple meaning.

Letters: Processing how a word looks is known as structural processing.

Phonetic processing is how we hear the word—the sounds it makes when the letters are read together. We compare the sound of the word to other words we have heard in order to retain some level of meaning in our memory. Phonetic processing is deeper than structural processing; that is, we are more likely to remember verbal information if we process it phonetically.

Semantic processing is when we apply meaning to words and compare or relate it to words with similar meanings. This deeper level of processing involves elaborative rehearsal, which is a more meaningful way to analyze information. This makes it more likely that the information will be stored in long-term memory, as it is associated with previously learned concepts.

One example of taking advantage of deeper semantic processing to improve retention is using the method of loci. This is when you associate non-visual material with something that can be visualized. Creating additional links between one memory and another, more familiar memory works as a cue for the new information being learned.

Imagine walking through a familiar area, such as your apartment. As you come to familiar sites, imagine that you can see the things you need to remember. Suppose you have to remember the first four presidents of the United States: Washington, Adams, Jefferson, and Madison. Your apartment also has four rooms: living room, kitchen, bathroom, and bedroom. Associate the first president, Washington, with the first room (the living room). Imagine him standing on your sofa as if it were the boat on which he crossed the Delaware River. Now, the second room is the kitchen, and so you imagine John Adams there. Think about him going over to the refrigerator, opening up and taking out a beer and remarking that his brother Samuel had brewed it. And so on for the rest of the presidents…