The endocrine and nervous systems work together to act as a communication system for the human body.

Outline the structure and function of the endocrine system

Hormones are chemicals within the endocrine system that affect physiological activity. They are secreted by one tissue and conveyed by the bloodstream to another tissue. Hormones have high levels of specificity, which means they only react with certain receptor sites in the body. The best way to describe hormones is to think of a lock and a key: only a certain hormone (lock) can create a certain response within your body’s receptive tissue (key).

Hormones can be divided into four separate groups: amino acids, polypeptides and proteins, steroids, and eicosanoids. The first three groups have hormones that can have a large impact psychologically; the eicosanoids primarily regulate blood movement.

There are a huge number of hormones that can be categorized as peptides. Some of the ones that are most important to psychology are:

There are eight major endocrine glands, each with a different function.

A molecular model of growth hormone: Growth hormone is used in hormone-replacement therapy in children.

The hypothalamic-pituitary-adrenal axis (HPA or HTPA axis) is a complex set of direct influences and feedback interactions among the hypothalamus, the pituitary gland, and the adrenal glands.

The interactions among these glands constitute the HPA axis, a major part of the neuroendocrine system that controls reactions to stress and regulates many body processes, including digestion, the immune system, mood and emotions, sexuality, and energy storage and expenditure. While steroid hormones are produced mainly in vertebrates, the physiological role of the HPA axis and corticosteroids in stress response is so fundamental that analogous systems can be found in invertebrates and monocellular organisms as well.

The Endocrine System and Stress

Explain the role of the HPA axis in regulating stress

Stress is the simple name for what happens when the body’s emergency response is activated; a stressful event is one that activates the sympathetic (fight-or-flight) nervous system. Because it elevates arousal, heart rate, and breathing, stress is useful for helping animals and humans escape dangerous situations; however, it can damage the body to be under stressful conditions for too long.

The HPA and Stress

Stressors can come in many forms, from immediate physical threats like an angry bear, to social threats like an angry friend. In experimental studies in rats, a distinction is often made between social stress and physical stress, but both types activate the HPA axis, albeit through different pathways. The hypothalamic-pituitary-adrenal (HPA or HTPA) axis is a complex set of direct influences and steroid-producing feedback interactions among the hypothalamus, the pituitary gland, and the adrenal glands. All vertebrates have an HPA, but the steroid-producing stress response is so important that even invertebrates and monocellular organisms have analogous systems.

The HPA is important to psychology because it is intimately involved with many mood disorders involving stress, including anxiety disorder, bipolar disorder, insomnia, PTSD, borderline personality disorder, ADHD, depression, and many others. Antidepressants work by reglulating the HPA axis.

The Function of the HPA Axis

The hypothalamus contains neurons that synthesize and secrete vasopressin and corticotropin-releasing hormone (CRH). These two hormones travel through blood to the anterior pituitary, where they cause the secretion of stored adrenocorticotropic hormone (ACTH). The ACTH acts on the adrenal cortex, which produces steroids—in humans, primarily the steroid cortisol. This causes a negative feedback cycle in which the steroids inhibit the hypothalamus and the pituitary gland, and it also causes the adrenal gland to produce the hormones epinephrine (also known as adrenaline) and norepinephrine.

In the process described above, the HPA axis ultimately produces cortisol. Studies on people show that the HPA axis is activated in different ways during chronic stress—depending on the type of stressor, the person’s response to the stressor, and other factors. Stressors that are uncontrollable, threaten physical integrity, or involve trauma tend to have a high, flat profile of cortisol release (with lower-than-normal levels of cortisol in the morning and higher-than-normal levels in the evening) resulting in a high overall level of daily cortisol release. On the other hand, controllable stressors tend to produce higher-than-normal morning cortisol. Stress hormone release tends to decline gradually after a stressor occurs. In post-traumatic stress disorder there appears to be lower-than-normal cortisol release, and it is thought that a blunted hormonal response to stress may predispose a person to develop PTSD.

There is growing evidence that prenatal stress can affect HPA regulation in humans. Children who were stressed prenatally may show altered cortisol rhythms. For example, several studies have found an association between maternal depression during pregnancy and childhood cortisol levels. Prenatal stress has also been implicated in a tendency toward depression and short attention span in childhood. However, there is no clear indication that HPA disregulation caused by prenatal stress can alter adult behavior.

The Endocrine System and Hunger

Hunger is divided into long-term and short-term regulation, each stimulating different hormone responses from the hypothalamus.

Hunger is the set of physical and psychological sensations that arise when food is needed by the body. It appears to increase activity and movement in many animals; this response may increase an animal’s chances of finding food. Food consumption (particularly overconsumption) can result in weight gain, whereas insufficient consumption, or malnutrition, will cause significant weight and motivational energy loss. Hunger is controlled by the hypothalamus and hormones. It is regulated over both the long term and the short term.

The physical sensation of hunger comes from contractions of the stomach muscles. These contractions are believed to be triggered by high concentrations of the hormone ghrelin. Two other hormones, peptide YY and leptin, cause the physical sensations of being full. Ghrelin is released if blood sugar levels get low, a condition that can result from going long periods without eating.

The hypothalamus regulates the body’s physiological homeostasis. When you are dehydrated, freezing, or exhausted, the appropriate biological responses are activated automatically: body fat reserves are utilized, urine production is inhibited, and blood is shunted away from the surface of the body. The drive to eat, or drink water, or seek warmth is activated. 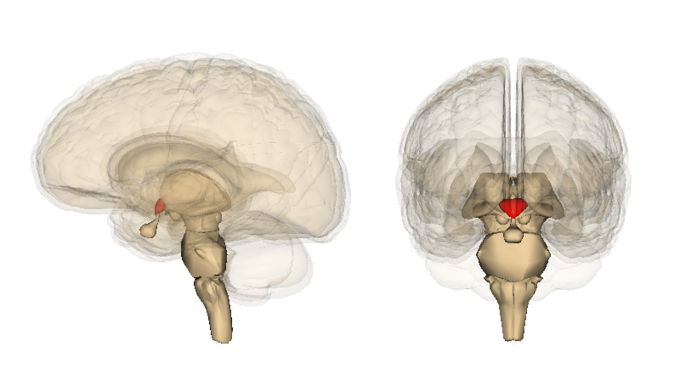 Hypothalamus: The hypothalamus is the region of the forebrain below the thalamus that forms the basal portion of the diencephalon. It regulates body temperature and some metabolic processes, and governs the autonomic nervous system.

The long-term regulation of hunger prevents energy shortfalls and is concerned with the regulation of body fat. Leptin, a hormone secreted exclusively by adipose cells in response to an increase in body-fat mass, helps regulate long-term hunger and food intake. Leptin serves as the brain’s indicator of the body’s total energy stores. The function of leptin is to suppress the release of neuropeptide Y (NPY), which in turn prevents the release of appetite-enhancing orexins from the lateral hypothalamus. This decreases appetite and food intake, promoting weight loss. Though rising blood levels of leptin do promote weight loss to some extent, its main role is to protect the body against weight loss in times of nutritional deprivation.

The short-term regulation of hunger deals with appetite and satiety. It involves neural signals from the GI tract, blood levels of nutrients, and GI-tract hormones.

Neural Signals from the GI Tract

The brain can evaluate the contents of the gut through vagal nerve fibers that carry signals between the brain and the gastrointestinal (GI) tract. Studies have shown that the brain can sense differences between macronutrients through these vagal nerve fibers. Stretch receptors (mechanoreceptors that respond to an organ being stretched or distended) work to inhibit appetite when the GI tract becomes distended. They send signals along the vagus nerve afferent pathway and ultimately inhibit the hunger centers of the hypothalamus.

Hormones can have a wide range of effects on hunger. The hormones insulin and cholecystokinin (CCK) are released from the GI tract during food absorption and act to suppress feelings of hunger. However, during fasting, glucagon and epinephrin levels rise and stimulate hunger. When blood sugar levels fall, the hypothalamus is stimulated. Ghrelin, a hormone produced by the stomach, triggers the release of orexin from the hypothalamus, signaling to the body that it is hungry.

Starvation is a severe deficiency in caloric energy, nutrient, and vitamin intake. It is the most extreme form of malnutrition. Prolonged starvation can cause permanent organ damage and, untreated, leads to death. Individuals experiencing starvation lose substantial fat and muscle mass, called catabolysis, when the body breaks down its own fat and muscle for energy. Vitamin deficiency, diarrhea, skin rashes, edema, and heart failure are also common results of starvation. In a state of starvation, other motivators—such as the desire for sleep, sex, and social activities— decrease. Individuals suffering from starvation may experience irritability, lethargy, impulsivity, hyperactivity, and more apathy over time.