Descriptive research refers to the measurement of behaviors and attributes through observation rather than through experimental testing.

Explain when descriptive research is useful

Research studies that do not test specific relationships between variables are called descriptive studies. These studies are used to describe general or specific behaviors and attributes that are observed and measured. In the early stages of research it might be difficult to form a hypothesis, especially when there is not any existing literature in the area. In these situations designing an experiment would be premature, as the question of interest is not yet clearly defined as a hypothesis. Often a researcher will begin with a non-experimental approach, such as a descriptive study, to gather more information about the topic before designing an experiment or correlational study to address a specific hypothesis. 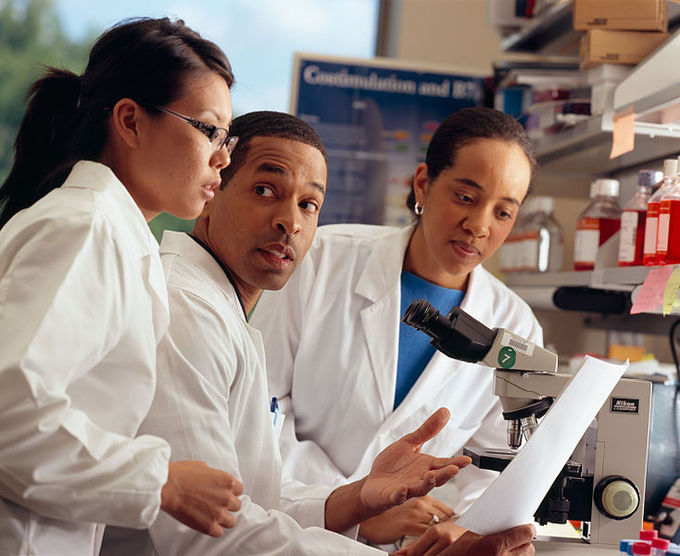 Descriptive Research: While descriptive research cannot be generalized beyond the specific object of study, it can help psychologists gain more information about a topic, and formulate hypotheses for future experiments.

Descriptive research can be used to gain a vast, if often inconclusive, amount of information. It has the advantage of studying individuals in their natural environment without the influence of the artificial aspects of an experiment. This approach can also be used to document rare events or conditions that could not be reproduced in a laboratory.

One important kind of descriptive research in psychology is the case study, which uses interviews, observation, or records to gain an in-depth understanding of a single person, group, or phenomenon. Although case studies cannot be generalized to the overall population (as can experimental research), nor can they provide predictive power (as can correlational research), they can provide extensive information for the development of new hypotheses for future testing and provide information about a rare or otherwise difficult-to-study event or condition.

Correlational research can be used to see if two variables are related and to make predictions based on this relationship.

A negative correlation, such as -.8, would mean that one variable increases as the other increases. You might expect to see a negative correlation between the amount of partying the night before a test and the score on that test—in other words, that more partying relates to a lower grade. 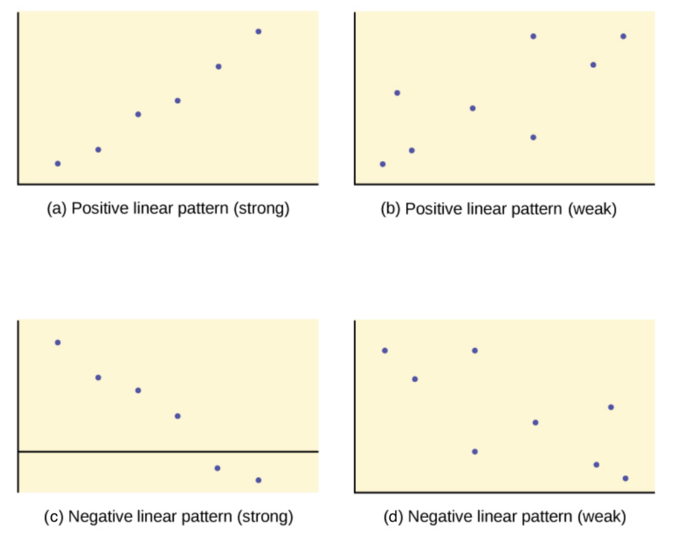 An experiment is not always the most appropriate approach to answering a research question. Sometimes it is not possible to carry out a true experiment for practical or ethical reasons because it is impossible to manipulate the independent variable. If a researcher was to look at the psychological effects of long-term ecstasy use, it would not be ethical to randomly assign participants to a condition of long-term ecstasy use. An experiment is also not feasible when examining the effects of personality and individual differences since participants cannot be randomly assigned into these categories. Correlational research allows a researcher to determine if there is a relationship between two variables without having to randomly assign participants to conditions.

The strength of correlational research is its predictive capabilities. With a large sample size, you can use one variable to predict the likelihood of the other when there is a strong correlation between the two. For instance, you could take two measurements from 1,000 families—whether the father is an alcoholic and whether a son is an alcoholic—and calculate the correlation. If there is a strong correlation between the two measurements, it will allow you to predict, within certain limits of probability, what the chances are that the son of an alcoholic father will also have a problem with alcohol.

A correlational study serves only to describe or predict behavior, not to explain it. Always remember that correlation does not imply causation. Since there is no random assignment to conditions, a researcher cannot rule out the possibility that there is a third variable affecting the relationship between the two variables measured. Even if there is no third variable, it is impossible to tell which factor is influencing the other. Only experimental research can determine causation. In the above example, while a research could predict the likelihood of an alcoholic father having an alcoholic son, they could not describe why this was the case.

An excellent example used by Li (1975) to illustrate the “third variable” problem is the positive correlation in Taiwan in the 1970’s between the use of contraception and the number of electric appliances in one’s house. Of course, using contraception does not induce you to buy electrical appliances or vice versa. Instead, the third variable of education level affects both.

Experimental research tests a hypothesis and establishes causation by using independent and dependent variables in a controlled environment.

Experimental research in psychology applies the scientific method to achieve the four goals of psychology: describing, explaining, predicting, and controlling behavior and mental processes. A psychologist can use experimental research to test a specific hypothesis by measuring and manipulating variables. By creating a controlled environment, researchers can test the effects of an independent variable on a dependent variable or variables. 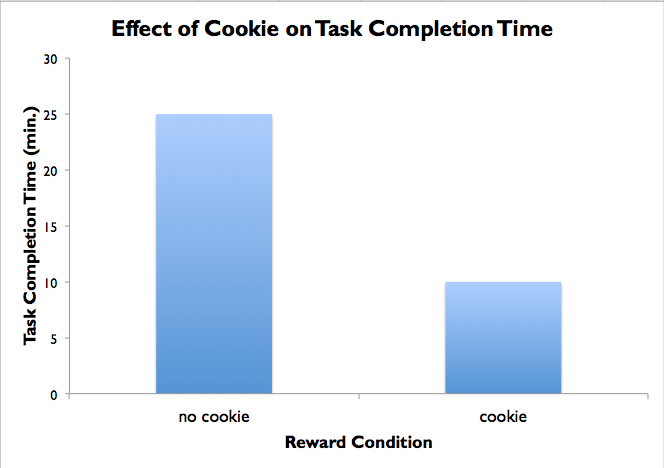 The purpose of an experiment is to investigate the relationship between two variables to test a hypothesis. By using the scientific method, a psychologist can plan and design an experiment that will answer the research question. The basic steps of experimental design are:

A poorly designed study will not produce reliable data. There are key components that must be included in every experiment: the inclusion of a comparison group (known as a “control group”), the use of random assignment, and efforts to eliminate bias. When a study is designed properly, the only difference between groups is the one made by the researcher.

To minimize the chances that an unintended variable influences the results, subjects must be assigned randomly to different treatment groups. Random assignment is used to ensure that any preexisting differences among the subjects do not impact the experiment. By distributing differences randomly between the conditions, random assignment lowers the chances that factors like age, socioeconomic status, personality measures, and other individual variables will affect the overall group’s response to the independent variable. Theoretically, the baseline of both the experimental and control groups will be the same before the experiment starts. Therefore, if there is a difference in the behavior of the two groups at the end of the experiment, the only reason would be the treatment given to the experimental group. In this way, an experiment can prove a cause-and-effect connection between the independent and dependent variables.

To preserve the integrity of the control group, both researcher(s) and subject(s) may be “blinded.” If a researcher expects certain results from an experiment and accordingly unknowingly influences the subjects’ responses, this is called demand bias. If the experimenter inadvertently interprets the information in a way that supports the hypothesis when other interpretations are possible, it is called the expectancy effect. To counteract experimenter bias, the subjects can be kept uninformed on the intentions of the experiment, which is called single blinding. If the people collecting the information and the participants are kept uninformed, then it is called a double blind experiment. By using blinding, a researcher can eliminate the chances that they are inadvertently influencing the outcome of the experiment.

When running an experiment, a researcher will want to pay close attention to their design to avoid error that can be introduced by not balancing the conditions properly. Consider the following example. You are running a study in which participants complete a task of pressing button A with their left hand if they see a green light and pressing button B with their right hand if they see a red light. You find support for your hypothesis that red stimuli are processed more quickly than green stimuli. However, an alternative explanation is that people are faster to respond with their right hand simply because most people are right-handed. The solution to this problem is to “counterbalance” your design. You will randomly assign 50% of your participants to respond to the red stimulus with their right hand (and green with their left) and assign the other 50% to respond to the red stimulus with their left hand (and green with their right). In this manner, you are anticipating and controlling for this extra source of error in your design.

Strengths and Weaknesses of Experimental Research

One of the main strengths of experimental research is that it can often determine a cause and effect relationship between two variables. By systematically manipulating and isolating the independent variable, the researcher can determine with confidence the independent variable’s causal effect on the dependent variable. Another strength of experimental research is the ability to assign participants to different conditions through random assignment. Randomly assigning participants to conditions ensures that each participant is equally likely to be assigned to one condition or another, and that there are no differences between experimental groups.

Although experimental research can often answer the causality questions that are left unclear by correlational studies, this is not always the case. Sometimes experiments may not be possible or ethical. Consider the example of the studying the correlation between playing violent video games and aggressive behavior. It would be unethical to assign children to play lots of violent video games over a long period of time to see if it had an impact on their aggression. Additionally, because experimental research relies on controlled, artificial environments, it can at times be difficult to generalize to real world situations, depending on the experiment’s design and sample size. If this is the case, the experiment is said to have poor external validity, meaning that the situation the participants were exposed to bears little resemblance to any real-life situation.