The Salk polio vaccine field trial incorporated a double blind placebo control methodolgy to determine the effectiveness of the vaccine.

Demonstrate how controls and treatment groups are used in drug testing.

The Salk polio vaccine field trials constitute one of the most famous and one of the largest statistical studies ever conducted. The field trials are of particular value to students of statistics because two different experimental designs were used.

The Salk vaccine, or inactivated poliovirus vaccine (IPV), is based on three wild, virulent reference strains:

grown in a type of monkey kidney tissue culture (Vero cell line), which are then inactivated with formalin. The injected Salk vaccine confers IgG-mediated immunity in the bloodstream, which prevents polio infection from progressing to viremia and protects the motor neurons, thus eliminating the risk of bulbar polio and post-polio syndrome.

Beginning February 23, 1954, the vaccine was tested at Arsenal Elementary School and the Watson Home for Children in Pittsburgh, Pennsylvania. Salk’s vaccine was then used in a test called the Francis Field Trial, led by Thomas Francis; the largest medical experiment in history. The test began with some 4,000 children at Franklin Sherman Elementary School in McLean, Virginia, and would eventually involve 1.8 million children, in 44 states from Maine to California. By the conclusion of the study, roughly 440,000 received one or more injections of the vaccine, about 210,000 children received a placebo, consisting of harmless culture media, and 1.2 million children received no vaccination and served as a control group, who would then be observed to see if any contracted polio.

The results of the field trial were announced April 12, 1955 (the 10th anniversary of the death of President Franklin D. Roosevelt, whose paralysis was generally believed to have been caused by polio). The Salk vaccine had been 60–70% effective against PV1 (poliovirus type 1), over 90% effective against PV2 and PV3, and 94% effective against the development of bulbar polio. Soon after Salk’s vaccine was licensed in 1955, children’s vaccination campaigns were launched. In the U.S, following a mass immunization campaign promoted by the March of Dimes, the annual number of polio cases fell from 35,000 in 1953 to 5,600 by 1957. By 1961 only 161 cases were recorded in the United States.

The original design of the experiment called for second graders (with parental consent) to form the treatment group and first and third graders to form the control group. This design was known as the observed control experiment. 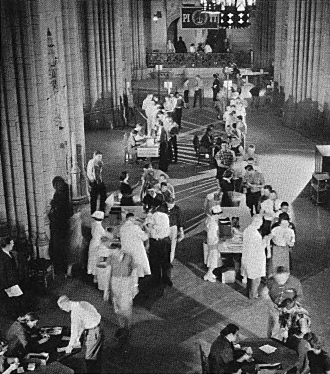 The Salk Polio Vaccine Field Trial: Jonas Salk administers his polio vaccine on February 26, 1957 in the Commons Room of the Cathedral of Learning at the University of Pittsburgh where the vaccine was created by Salk and his team.

Two serious issues arose in this design: selection bias and diagnostic bias. Because only second graders with permission from their parents were administered the treatment, this treatment group became self-selecting.

This design also had the characteristic of being double-blind. Double-blind describes an especially stringent way of conducting an experiment on human test subjects which attempts to eliminate subjective, unrecognized biases carried by an experiment’s subjects and conductors. In a double-blind experiment, neither the participants nor the researchers know which participants belong to the control group, as opposed to the test group. Only after all data have been recorded (and in some cases, analyzed) do the researchers learn which participants were which.

This combination of randomized control and double-blind experimental factors has become the gold standard for a clinical trial.

Numerous studies have been conducted to examine the value of the portacaval shunt procedure, many using randomized controls.

Assess the value that the practice of random assignment adds to experimental design.

A portacaval shunt is a treatment for high blood pressure in the liver. A connection is made between the portal vein, which supplies 75% of the liver’s blood, and the inferior vena cava, the vein that drains blood from the lower two-thirds of the body. The most common causes of liver disease resulting in portal hypertension are cirrhosis, caused by alcohol abuse, and viral hepatitis (hepatitis B and C). Less common causes include diseases such as hemochromatosis, primary biliary cirrhosis (PBC), and portal vein thrombosis. The procedure is long and hazardous. 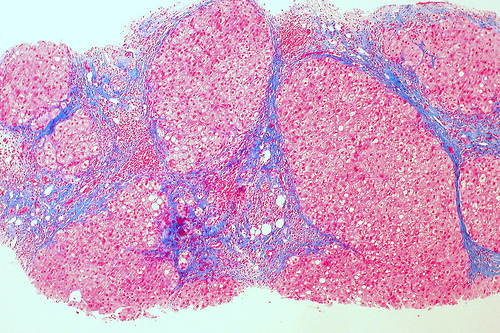 The Portacaval Shunt: This image is a trichrome stain showing cirrhosis of the liver. Cirrhosis can be combatted by the portacaval shunt procedure, for which there have been numerous experimental trials using randomized assignment.

The steps to random assignment include:

Because most basic statistical tests require the hypothesis of an independent randomly sampled population, random assignment is the desired assignment method. It provides control for all attributes of the members of the samples—in contrast to matching on only one or more variables—and provides the mathematical basis for estimating the likelihood of group equivalence for characteristics one is interested in. This applies both for pre-treatment checks on equivalence and the evaluation of post treatment results using inferential statistics. More advanced statistical modeling can be used to adapt the inference to the sampling method.

A scientific control is an observation designed to minimize the effects of variables other than the single independent variable.

Classify scientific controls and identify how they are used in experiments.

What Is a Control?

A scientific control is an observation designed to minimize the effects of variables other than the single independent variable. This increases the reliability of the results, often through a comparison between control measurements and the other measurements.

For example, during drug testing, scientists will try to control two groups to keep them as identical as possible, then allow one group to try the drug. Another example might be testing plant fertilizer by giving it to only half the plants in a garden: the plants that receive no fertilizer are the control group, because they establish the baseline level of growth that the fertilizer-treated plants will be compared against. Without a control group, the experiment cannot determine whether the fertilizer-treated plants grow more than they would have if untreated.

Ideally, all variables in an experiment will be controlled (accounted for by the control measurements) and none will be uncontrolled. In such an experiment, if all the controls work as expected, it is possible to conclude that the experiment is working as intended and that the results of the experiment are due to the effect of the variable being tested. That is, scientific controls allow an investigator to make a claim like “Two situations were identical until factor X occurred. Since factor X is the only difference between the two situations, the new outcome was caused by factor X. ”

Controlled experiments can be performed when it is difficult to exactly control all the conditions in an experiment. In this case, the experiment begins by creating two or more sample groups that are probabilistically equivalent, which means that measurements of traits should be similar among the groups and that the groups should respond in the same manner if given the same treatment. This equivalency is determined by statistical methods that take into account the amount of variation between individuals and the number of individuals in each group. In fields such as microbiology and chemistry, where there is very little variation between individuals and the group size is easily in the millions, these statistical methods are often bypassed and simply splitting a solution into equal parts is assumed to produce identical sample groups.

Negative controls are groups where no phenomenon is expected. They ensure that there is no effect when there should be no effect. To continue with the example of drug testing, a negative control is a group that has not been administered the drug. We would say that the control group should show a negative or null effect.

Positive controls are groups where a phenomenon is expected. That is, they ensure that there is an effect when there should be an effect. This is accomplished by using an experimental treatment that is already known to produce that effect and then comparing this to the treatment that is being investigated in the experiment.

Positive controls are often used to assess test validity. For example, to assess a new test’s ability to detect a disease, then we can compare it against a different test that is already known to work. The well-established test is the positive control, since we already know that the answer to the question (whether the test works) is yes. 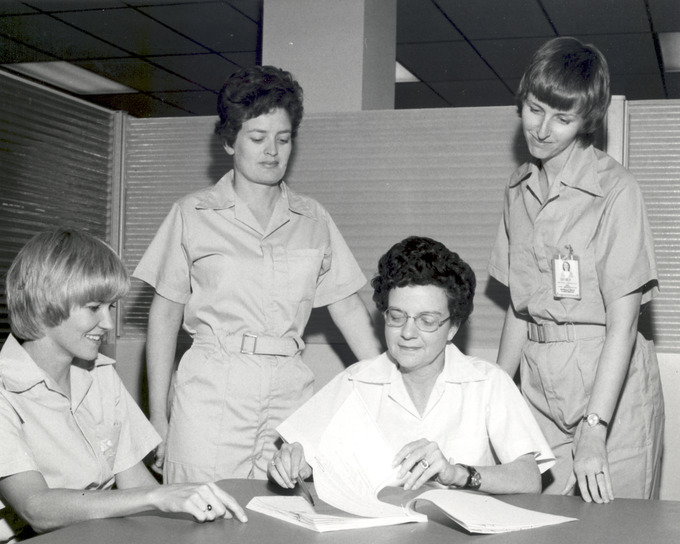 Controlled Experiments: An all-female crew of scientific experimenters began a five-day exercise on December 16, 1974. They conducted 11 selected experiments in materials science to determine their practical application for Spacelab missions and to identify integration and operational problems that might occur on actual missions. Air circulation, temperature, humidity and other factors were carefully controlled.