Throughout the first half of the nineteenth century, the United States underwent vast cultural, religious, and demographic transformations.

Summarize the ways in which American society changed religously, culturally, and demographically in the early 19th century

The Human Effects of Industrial Advancements

By the 1830s, the United States had developed a thriving industrial and commercial sector in the Northeast. Farmers embraced regional and distant markets as the primary destination for their products. Artisans witnessed the methodical division of the labor process in factories. Wage labor became an increasingly common experience. These industrial and market revolutions, combined with advances in transportation, transformed the economic and social landscape. Americans could now quickly produce larger amounts of goods for a nationwide, and sometimes an international, market and rely less on foreign imports than they did in colonial times.

As American economic life shifted rapidly and modes of production changed, new class divisions emerged and solidified, resulting in previously unknown economic and social inequalities. Crowded urban settlements of American day laborers and low-wage workers emerged, and these individuals lived a precarious existence that the economic benefits of the new economy largely bypassed. An influx of immigrant workers swelled and diversified an already crowded urban population. By the 1830s, slums became home to widespread poverty, crime, and disease. Advances in industrialization and the market revolution came at a human price.

The reform efforts of the antebellum years, including abolitionism, aimed to perfect the national destiny and redeem the souls of individual Americans. A great deal of optimism, fueled by evangelical Protestantism revivalism, underwrote the moral crusades of the first half of the nineteenth century. Some reformers targeted what they perceived as the shallow, materialistic, and democratic market culture of the United States and advocated a stronger sense of individualism and self-reliance. Others dreamed of a more equal society and established their own idealistic communities. Still others, who viewed slavery as the most serious flaw in American life, labored to end the institution. Women’s rights, temperance, health-care issues, and a host of other efforts also came to the forefront during the heyday of reform in the 1830s and 1840s.

The Second Great Awakening and Transcendentalism

Evangelical Protestantism pervaded American culture in the antebellum era and fueled a belief in the possibility of changing society for the better. Leaders of the Second Great Awakening such as Charles G. Finney urged listeners to take charge of their own salvation. This religious message dovetailed with the new economic possibilities created by the market and Industrial Revolution, making the Protestantism of the Second Great Awakening, with its emphasis on individual spiritual success, a reflection of the individualistic, capitalist spirit of the age. Transcendentalists took a different approach, but like their religiously oriented brethren, they too looked to create a better existence. These authors, most notably Ralph Waldo Emerson, identified a major tension in American life between the effort to be part of the democratic majority and the need to remain true to oneself as an individual.

Many reformers of the time engaged in communal experiments aimed to recast economic and social relationships by introducing innovations designed to create a more stable and equitable society. Their ideas found many expressions, from early socialist experiments (such as by the Fourierists and the Owenites) to the dreams of the New England intellectual elite (such as Brook Farm). The Second Great Awakening also prompted many religious utopias, like those of the Rappites, the Shakers, and the Mormons. 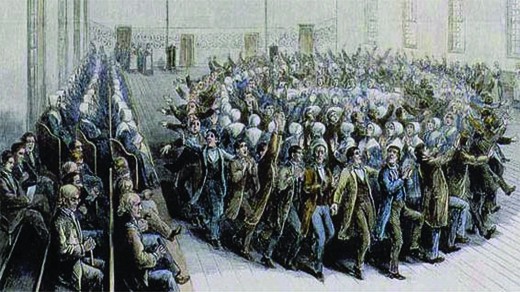 Shakers: The Shaker community of the nineteenth century was one of many groups established with a religious mission.

In the middle half of the nineteenth century, more than one-half of the population of Ireland emigrated to the United States, along with an equal number of Germans. Most of these immigrants arrived because of civil unrest, severe unemployment, or hardships at home. This wave of immigration affected almost every city in the United States. From 1820 to 1870, more than 7.5 million immigrants came to the United States—more than the entire population of the country in 1810. Burgeoning companies were able to absorb all who wanted to work. Immigrants built canals and constructed railroads, and were involved in almost every labor-intensive endeavor in the country. Much of the country was built on their backs.