Conclusion: Political Crises in the 70s and 80s

Conclusion: Political Crises in the 70s and 80s

The 1970s and 80s were marked by the continuation of the Cold War and its proxy wars around the world, as well as a rise in both conservatism and liberal social movements at home.

In the presidential election of 1968, the Republican candidate, Richard Nixon, won voters in the south, southwest, and northern suburbs by appealing to their anxieties about civil rights, women’s rights, antiwar protests, and the counterculture taking place around them. Nixon spent his first term in office pushing measures that slowed the progress of civil rights and sought to restore economic stability. He strode a moderate, middle path in domestic affairs, attempting with little success to solve the problems of inflation and unemployment through a combination of austerity and deficit spending. He made substantial progress in foreign policy, however, establishing diplomatic relations with China for the first time since the Communist Revolution and entering into a policy of détente with the Soviet Union.

The War in Vietnam

As the war in Vietnam raged on, Americans were horrified to hear of atrocities committed by U.S. soldiers. To try to end the conflict, Nixon first escalated it by bombing Hanoi and invading Cambodia; his actions provoked massive anti-war demonstrations in the United States that often ended in violence, such as the tragic shooting of unarmed student protesters at Kent State University in 1970. The 1971 release of the Pentagon Papers revealed the true nature of the war to an increasingly disapproving and disenchanted public. Secretary of State Henry Kissinger eventually drafted a peace treaty with North Vietnam, and, after handing over responsibility for the war to South Vietnam, the United States withdrew its troops in 1973. South Vietnam surrendered to the North two years later.

In 1972, President Nixon faced an easy reelection against a Democratic party in disarray. Even before his landslide victory, however, evidence had surfaced that the White House was involved in the break-in at the Democratic National Convention’s headquarters at the Watergate office complex. As the investigation unfolded, the depths to which Nixon and his advisers were engaged in illegal activity became clear. Some 25 of Nixon’s aides were indicted for criminal activity, and he became the first president impeached since Andrew Johnson, and the first to resign from office. His successor, Gerald Ford, was unable to solve the pressing problems the United States faced or erase the stain of Watergate.

At his inauguration in January 1977, President Jimmy Carter began his speech by thanking outgoing president Gerald Ford for all he had done to “heal” the scars left by Watergate. American gratitude had not been great enough to return Ford to the Oval Office, but enthusiasm for the new president was not much greater in the new atmosphere of disillusionment with political leaders. Indeed, Carter won his party’s nomination and the presidency largely because the Democratic leadership had been decimated by assassination and the taint of Vietnam. Carter had also carefully positioned himself as an outsider who could not be blamed for current policies.

The Reagan Administration and the Tumultuous 1980s

Ronald Reagan entered the White House in 1981 with strongly conservative values but experience in moderate politics. He appealed to moderates and conservatives who were anxious about social change, and the seeming loss of American power and influence on the world stage. Leading the so-called Reagan Revolution, he appealed to voters with the promise that the principles of conservatism could halt and revert the social and economic changes of the last generation. Implementing a series of economic policies dubbed “Reaganomics,” the president sought to stimulate the economy while shrinking the size of the federal government and providing relief for the nation’s wealthiest taxpayers. During his two terms in office, he cut spending on social programs, while increasing spending on defense.

The Rise of Conservatism

During the 1980s, numerous groups were concerned by what they considered disturbing social, cultural, and political trends in the United States, and lobbied for their vision of what the nation should be. Conservative politicians led by President Reagan’s administration cut taxes for the wealthy and shrank programs for the poor, while conservative Christians blamed the legalization of abortion and the increased visibility of gays and lesbians for weakening the “American family.” When the U.S. Centers for Disease Control first recognized Acquired Immune Deficiency Syndrome (AIDS) in 1981, the Religious Right regarded it as a plague sent by God to punish homosexual men. Politicians, many of whom relied on religious conservatives for their votes, largely ignored the AIDS epidemic. In response, gay men and women formed organizations, such as ACT UP, to draw attention to their cause. Meanwhile, the so-called war on drugs began a get-tough trend in law enforcement that mandated lengthy sentences for drug-related offenses, and hugely increased the American prison population, especially among African Americans and other people of color. 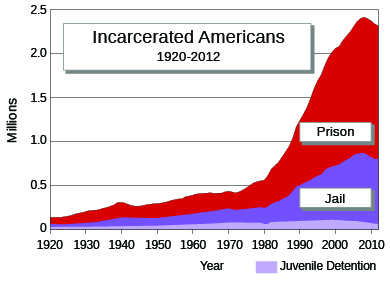 Rates of incarceration in the United States, 1920-2012: This graph of the number of people in jail, prison, and juvenile detention by decade in the United States shows the huge increase in incarceration during the war on drugs that began in the 1980s, during the Reagan administration. (Prisons are long-term state or federal facilities; jails are local, short-term facilities.)

In addition to reviving the economy and reducing the size of the federal government, Ronald Reagan also wished to restore American stature in the world. He entered the White House a “cold warrior,” and referred to the Soviet Union in a 1983 speech as an “evil empire.” Dedicated to upholding even authoritarian governments in foreign countries in order to keep them “safe” from Soviet influence, he was also desperate to put to rest Vietnam Syndrome—the reluctance to use military force in foreign countries for fear of embarrassing defeat—, which had influenced U.S. foreign policy since the mid-1970s. Reagan increased the American stockpile of weapons and aided anti-Communist groups in the Caribbean and Central America. The Reagan administration’s secret sales of arms to Iran, known as the Iran-Contra Affair, proved disastrous, however, and resulted in indictments for administration officials.

The End of the Cold War

Cold War tensions slowly began to ease beginning in the mid-1980s. In 1985, Soviet leader Mikhel Gorbachev and President Reagan met in Geneva to reduce armaments and shrink their respective military budgets. The following year, meeting in Reykjavík, Iceland, they surprised the world by announcing that they would try to eliminate nuclear weapons by 1996. In 1987, they agreed to eliminate a whole category of nuclear weapons when they signed the Intermediate-Range Nuclear Forces (INF) Treaty at the White House. This laid the foundation for future agreements limiting nuclear weapons.