The post-World War II United States went through a period of unprecedented economic prosperity for many white Americans that coincided with black Americans’ intensifying the struggle for civil rights and economic justice.

Summarize the changes in U.S. society in the years following World War II

Following World War II, the United States emerged as one of the two dominant superpowers, along with the the Soviet Union. The U.S. Senate in a bipartisan vote approved U.S. participation in the United Nations (UN), which marked a turn away from the traditional isolationism of the United States and toward increased international involvement. In 1949, the United States, rejecting the long-standing policy of no military alliances in peacetime, formed the North Atlantic Treaty Organization (NATO) alliance, which continues into the 21st century. In response, the Soviets formed the Warsaw Pact of communist states.

In August 1949, the Soviets tested their first nuclear weapon, thereby escalating the risk of warfare. Indeed, the threat of mutually assured destruction prevented both powers from going too far, and resulted in proxy wars, most notably in Korea and Vietnam, in which the two sides did not directly confront each other. Within the United States, the Cold War prompted concerns about Communist influence. The unexpected leapfrogging of U.S. technology by the Soviets in 1957 with Sputnik, the first Earth satellite, began the Space Race, won by the Americans as Apollo 11 landed astronauts on the moon in 1969. The angst about the weaknesses of U.S. education led to large-scale federal support for science education and research.

In the decades following World War II, the United States became a global influence in economic, political, military, cultural, and technological affairs. Beginning in the 1950s, middle-class culture became obsessed with consumer goods. Increasing numbers of workers enjoyed high wages, larger houses, better schools, and more cars and household technology. The U.S. economy grew dramatically in the post-war period, expanding at an annual rate of 3.5%. The substantial increase in average family income within a generation resulted in millions of office and factory workers being lifted into a growing middle class, enabling them to sustain a standard of living once considered reserved for the wealthy. As noted by scholar Deone Zell, assembly line work paid well, while unionized factory job served as “stepping-stones to the middle class.” By the end of the 1950s, 87% of all U.S. families owned at least one television, 75% owned cars, and 60% owned their homes. By 1960, blue-collar workers had become the biggest buyers of many luxury goods and services.

The period from 1946 to 1960 also witnessed a significant increase in the paid leisure time of working people. The 40-hour workweek established by the Fair Labor Standards Act in covered industries became the actual schedule in most workplaces by 1960. The majority of workers also enjoyed paid vacations and industries catering to leisure activities blossomed. 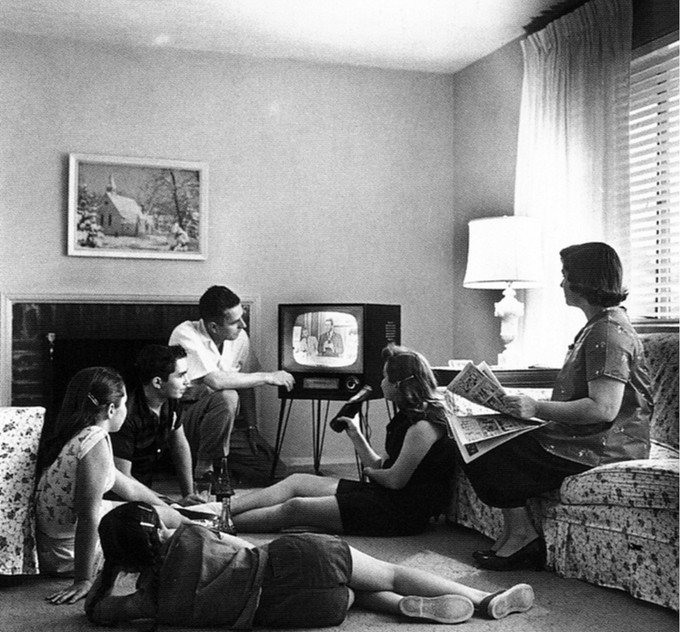 American family watching TV in 1958, photo by Evert F. Baumgardner for National Archives and Records Administration.: The 1950s witnessed the explosion of a consumer goods economy. By the end of the 1950s, 87% of all U.S. families owned at least one television, 75% owned cars, and 60% owned their homes. Images of prosperous white middle-class families in their suburban homes symbolized the popular narrative of economic stability and traditional family values.

Educational outlays were also greater than in other countries while a higher proportion of young people were graduating from high schools and universities than elsewhere in the world, as hundreds of new colleges and universities opened every year. At the advanced level, U.S. science, engineering, and medicine were world-famous.

In regard to social welfare, the postwar era saw a considerable improvement in insurance for workers and their dependents against the risks of illness, as private insurance programs like Blue Cross and Blue Shield expanded. With the notable exception of farm and domestic workers, virtually all members of the labor force were covered by Social Security. In 1959, about two-thirds of factory workers and three-fourths of office workers were provided with supplemental private pension plans.

Many city dwellers gave up cramped urban apartments for a suburban lifestyle centered on children and housewives, with the male breadwinner commuting to work. By 1960, suburbia encompassed a third of the nation’s population. The growth of suburbs was not only a result of postwar prosperity, but innovations of the single-family housing market with low interest rates on 20- and 30-year mortgages, and low down payments, especially for veterans. William Levitt began a national trend with his use of mass-production techniques to construct a large “Levittown” housing development on Long Island. Meanwhile, the suburban population swelled because of the baby boom; a dramatic increase in fertility in the period of 1942–1957.

The role of women in U.S. society became an issue of particular interest in the post-war years, with marriage and feminine domesticity depicted as the primary goal for the American woman. As women had been forced out of the labor market by men returning from the military service, many chafed at the social expectations of being an idle stay-at-home housewife who cooked, cleaned, shopped, and tended to the children. Marriage rates rose sharply in the 1940s and reached all-time highs. Americans began to marry at a younger age and marriage immediately after high school was becoming commonplace. Women were increasingly under tremendous pressure to marry by the age of 20. The stereotype developed that women were going to college to earn their M.R.S. (Mrs.) degree.

In 1963, Betty Friedan publisher her book The Feminine Mystique, which strongly criticized the role of women during the postwar years and was a bestseller and a major catalyst of the new wave of women’s liberation movement.

In 1946, live births in the United States surged from 222,721 in January to 339,499 in October. By the end of the 1940s, about 32 million babies had been born, compared with 24 million in the 1930s. Sylvia Porter, a New York Post columnist, first used the term “boom” to refer to the phenomenon of increased births in the post-war United States in May 1951. Annual births first topped four million in 1954 and did not drop below that figure until 1965, by which time four out of ten Americans were under age 20.

Many factors contributed to the baby boom. In the post-war years, couples that could not afford families during the Great Depression made up for lost time. The mood was now optimistic. Unemployment ended and the economy greatly expanded. Millions of veterans returned home and were forced to reintegrate into society. To facilitate the integration process, Congress passed the G.I. Bill of Rights, which encouraged home ownership and investment in higher education through the distribution of loans to veterans at low or zero interest rates. The G.I. Bill enabled record numbers of people to finish high school and attend college. This led to an increase in stock of skills and yielded higher incomes to families.

The post-World War II prosperity did not extend to everyone. Many Americans continued to live in poverty throughout the 1950s, especially older people and African Americans, the latter of whom continued to earn far less on average than their white counterparts. Immediately after the war, 12 million returning veterans were in need of work, and in many cases could not find it. In addition, labor strikes rocked the nation, in some cases exacerbated by racial tensions due to African Americans having taken jobs during the war and now being faced with irate returning veterans who demanded that they step aside. The huge number of women employed in the workforce in the war were also rapidly cleared out to make room for men. Many blue-collar workers continued to live in poverty, with 30% of those employed in industry. Racial differences were staggering. In 1947, 60% of black families lived below the poverty level (defined in one study as below $3000 in 1968), compared with 23% of white families. In 1968, 23% of black families lived below the poverty level, compared with 9% of white families.

Voting rights discrimination remained widespread in the south through the 1950s. Fewer than 10% voted in the Deep South, although a larger proportion voted in the border states, and black Americans were being organized into Democratic machines in the northern cities. Although both parties pledged progress in 1948, the only major development before 1954 was integration of the military.

In the early days of the Civil Rights Movement, litigation and lobbying were the focus of integration efforts. The Supreme Court decisions in Brown v. Board of Education (1954) and other critical cases led to a shift in tactics, and from 1955 to 1965, “direct action” was the strategy—primarily bus boycotts, sit-ins, freedom rides, and social movements. Brown was a landmark case that explicitly outlawed segregation of public education facilities for black and white Americans, ruling so on the grounds that the doctrine of “separate but equal” public education could never truly provide black Americans with facilities of the same standards available to white Americans. 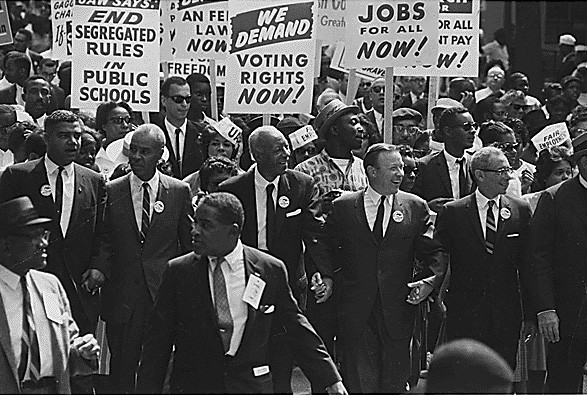 The 1963 March on Washington, photograph by Rowland Scherman for USIA – U.S. National Archives and Records Administration.: The intensification of the black struggle for civil rights and economic justice was one of the most important developments in the post-World War II United States. The fate of African Americans did not match the overall sense of optimism and excitement that many white Americans experienced as a result of the post war economic boom.