Conclusion: The Consequences of the British Parliamentary Acts

Conclusion: The Consequences of the British Parliamentary Acts

A series of Parliamentary Acts from 1763–1774 contributed to rising colonial unrest, culminating in the outbreak of the Revolutionary War.

An increasing tide of unrest rose in the British American colonies from 1763–1774 as the British government imposed a series of imperial reform measures. The British hoped not only to gain greater control over colonial trade and frontier settlement, but also to reduce the administrative cost of the colonies and the enormous debt left by the French and Indian War. Each step the British took, however, generated a backlash. Over time, imperial reforms pushed many colonists toward separation from the British Empire.

Confronting the National Debt: The Aftermath of the French and Indian War

The British Empire had gained supremacy in North America with its victory over the French in 1763. Almost all of the North American territory east of the Mississippi fell under Great Britain’s control, and British leaders took this opportunity to try to create a more coherent and unified empire after decades of lax oversight. Victory over the French had proved very costly, however, and the British believed the frontier had to be secured with a standing army in order to prevent another costly war with American Indian tribes. Greater enforcement of imperial trade laws was put into place, and Parliament sought to raise revenue to pay off the crippling debt from the war and the cost of a standing army in America by implementing new taxes on the colonies.

The initial steps the British took in 1763 and 1764
to better regulate their expanded empire in North America raised suspicions among some colonists about the intent of the home government. These suspicions would grow and swell over the coming years.

In 1765, the British Parliament moved beyond the efforts during the previous two years to better regulate westward expansion and trade with the Stamp Act. As a direct tax on the colonists, the Stamp Act imposed an internal tax on almost every type of printed paper colonists used, including newspapers, legal documents, and playing cards. While the architects of the Stamp Act saw the measure as a way to defray the costs of the British Empire, it nonetheless gave rise to the first major colonial protest against British imperial control as expressed in the famous slogan “no taxation without representation.”

The Stamp Act reinforced the sense among some colonists that Parliament was not treating them as equals of their peers across the Atlantic. Outrage over the act created a degree of unity among otherwise unconnected American colonists, giving them a chance to act together both politically and socially. The crisis of the Stamp Act allowed colonists to loudly proclaim their identity as defenders of British liberty. With the repeal of the Stamp Act in 1766, liberty-loving subjects of the king celebrated what they viewed as a victory. 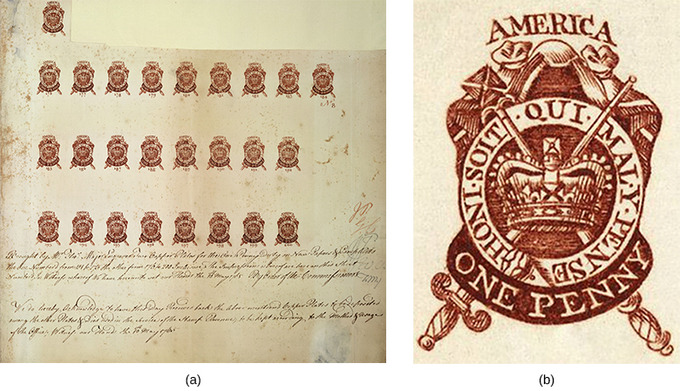 The Townshend Acts and the Boston Massacre

Colonists’ joy over the repeal of the Stamp Act did not last long. The Declaratory Act of 1766 had articulated Great Britain’s supreme authority over the colonies, and Parliament soon began exercising that authority. In 1767, Parliament passed the Townshend Acts, which implemented a tax on consumer goods in British North America. Like the Stamp Act, the Townshend Acts led many colonists to work together against what they perceived to be an unconstitutional measure. Protests eventually led to the Boston Massacre of 1770, in which five colonists were killed. The experience of resisting the Townshend Acts provided another shared experience among colonists from diverse regions and backgrounds, while its later partial repeal convinced many that liberty had once again been defended. Nonetheless, Great Britain’s debt crisis still had not been solved.

The Tea Act and the Boston Tea Party

The Tea Act of 1773 triggered a reaction with far more significant consequences than either the 1765 Stamp Act or the 1767 Townshend Acts. Colonists who had joined in protest against those earlier acts renewed their efforts in 1773. They understood that Parliament had again asserted its right to impose taxes without representation, and they feared the Tea Act was designed to seduce them into conceding this important principle by lowering the price of tea to the point that colonists might be satisfied. They also deeply resented the East India Company’s monopoly on the sale of tea in the American colonies; this resentment sprang from the knowledge that some members of Parliament had invested heavily in the company.

The colonial rejection of the Tea Act culminated in an act of resistance known as the Boston Tea Party, in which a group of colonists from the Sons of Liberty threw $1 million (in today’s dollars) worth of British tea into the Boston Harbor that was meant to be sold in the colonies. This act recast the decade-long argument between British colonists and the home government as an intolerable conspiracy against liberty and an excessive overreach of parliamentary power. The British responded by implementing the Coercive Acts, which were punitive in nature and meant to make an example of the colonies; and sending British troops to Boston to close Boston Harbor, causing tensions and resentments to escalate further.

The First Continental Congress and the Outbreak of War

Following the Coercive Acts, colonists established the First Continental Congress, which comprised elected representatives from 12 of the 13 American colonies and represented a direct challenge to British authority. In its Declaration and Resolves, colonists demanded the repeal of all repressive acts passed since 1773. The delegates also recommended that the colonies raise militias, lest the British respond to the Congress’s proposed boycott of British goods with force. While the colonists still considered themselves British subjects, they were slowly retreating from British authority, creating their own de facto government via the First Continental Congress.

The British largely ignored the demands of the Continental Congress and tried to disarm colonial insurgents in Massachusetts by confiscating their weapons and ammunition and arresting the leaders of the patriotic movement. However, this effort faltered on April 19, 1775, when Massachusetts militias and British troops fired on each other as British troops marched to Lexington and Concord, an event immortalized by poet Ralph Waldo Emerson as the “shot heard round the world.” The American Revolution had begun.