Conclusion: The Development of Democracy

Conclusion: The Development of Democracy

One of the most notable political development in the early nineteenth century was the rise of American democracy, especially in the Age of Jackson.

Describe the evolution of American democracy during the Jacksonian era

The Rise of Democracy in the Nineteenth Century

One of the most notable political developments in the years before the Civil War was the rise of American democracy. Whereas the founders of the new nation envisioned the United States as a republic, not a democracy, and had placed safeguards such as the Electoral College in the 1787 Constitution to prevent simple majority rule, the early 1820s saw many Americans embracing majority rule and rejecting old forms of deference that were based on elite ideas of virtue, learning, and family lineage.

A new breed of politicians learned to harness the power of the many by appealing to the resentments, fears, and passions of ordinary citizens to win elections. The charismatic Andrew Jackson gained a reputation as a fighter and defender of American expansion, emerging as the quintessential figure leading the rise of American democracy. Characteristics of modern American democracy, including the turbulent nature of majority rule, first appeared during the Age of Jackson.

Political leaders and parties rose to popularity by championing the will of the people, pushing the country toward a future in which a wider swath of citizens gained a political voice. The Federalists from the first party system had slowly declined and disintegrated. As Federalist ideals fell out of favor, ordinary white men from the middle and lower classes increasingly questioned the idea that property ownership—which was required in most states to be able to vote—was an indication of virtue. They argued for “universal manhood suffrage,” or voting rights for all white male adults. This expansion of political power was limited to white men; women, free blacks, and American Indians remained—or grew increasingly—disenfranchised by the American political system.

The election of 1824 proved a turning point in American politics. With tens of thousands of new voters, the older system of having members of Congress form congressional caucuses to determine who would run no longer worked. The new voters had regional interests and voted on them. For the first time, the popular vote mattered in a presidential election.

Another turning point in American political history occurred in 1828, which witnessed the election of Andrew Jackson over the incumbent John Quincy Adams. While democratic practices had been in ascendance since 1800, the year also saw the further unfolding of a democratic spirit in the United States. Supporters of Jackson called themselves “Democrats” or the “Democracy,” giving birth to the Democratic Party. Political authority appeared to rest with the majority as never before. Although Jackson ran on a platform of clearing the corruption out of Washington, he rewarded his own loyal followers with plum government jobs, thus continuing and intensifying the cycle of favoritism and corruption. 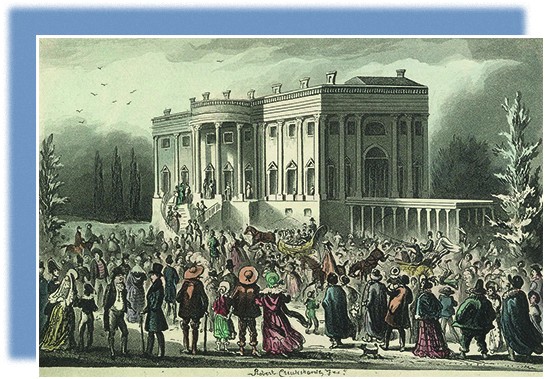 President Andrew Jackson’s inauguration, 1829: In President’s Levee, or all Creation going to the White House, Washington (1841), by Robert Cruikshank, the artist depicts Andrew Jackson’s inauguration in 1829, with crowds surging into the White House to join the celebrations. Rowdy revelers destroyed many White House furnishings in their merriment. A new political era of democracy had begun, one characterized by the rule of the majority.

The crisis over the Tariff of 1828 continued into the 1830s and highlighted one of the currents of democracy in the Age of Jackson: Many southerners believed a democratic majority could be harmful to their interests. These southerners saw themselves as an embattled minority and claimed the right of states to nullify federal laws that appeared to threaten state sovereignty. Another undercurrent was the resentment and anger of the majority against symbols of elite privilege, especially powerful financial institutions such as the Second Bank of the United States.

Jackson understood the views of the majority, and he skillfully used the popular will to his advantage. He adroitly navigated through the Nullification Crisis and made headlines with what his supporters viewed as his righteous war against the bastion of money, power, and entrenched insider interests, the Second Bank of the United States. His actions, however, stimulated opponents to fashion an opposition party, the Whigs.