Conclusion: The Legacy of WWI

Conclusion: The Legacy of WWI

World War I both decimated and transformed the modern world, with the United States taking on a major role and seeing numerous changes in its national character and policies.

World War I was a transformative period for the entire world, but especially for the United States, a nation still in its political and cultural infancy compared to the old empires of Europe. The war brought America onto the global stage in a way never before experienced. While U.S. international relations had been mostly limited to engagements with its neighbors to the south and the solidifying of relations with Europe, World War I cast the United States as a major player in a tragic drama that established future geographic boundaries and political powers around the globe, while also helping set the tone for America’s own domestic policies and concerns.

World War I not only caused the United States to undergo internal changes it could not have anticipated, but also brought up issues that had previously been mishandled or ignored; only through meeting these head on did America begin its transformation to a modern political and cultural leader. The major issues that arose included the questions of neutrality followed by a call to arms, mobilization, wartime economic changes, civil liberties and racial friction, and immigration. In the midst of America’s war, it also held a polarizing presidential election. 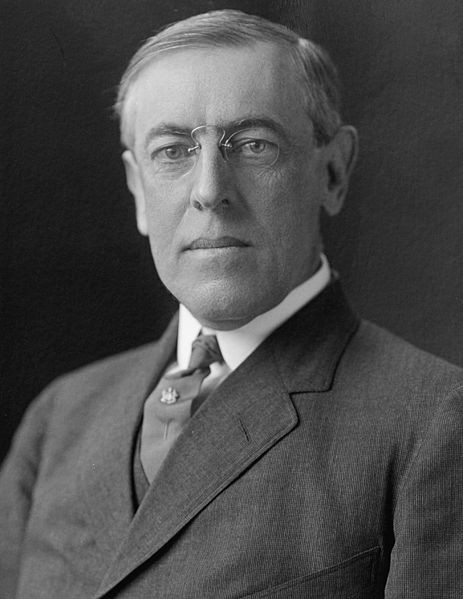 The U.S. presidential election of 1916, which pitted incumbent Democratic President Woodrow Wilson against Republican Supreme Court Justice Charles Evans Hughes, took place while Europe was embroiled in World War I. Public sentiment in America favored the British and French forces, but most American voters wanted to remain neutral and avoid direct involvement in the conflict, which was the position taken by Wilson. He ultimately took 30 states for 277 electoral votes, while his popular vote margin of 3.1 percent remained the smallest attained by a victorious sitting president until 2004.

In 1915, America’s army was outnumbered 20 to one by the German army, and neither the U.S. Army nor the Navy was ready for the war already engulfing large parts of the globe. Pressured by the Preparedness Movement, Congress passed the National Defense Act of 1916, authorizing an enormous increase in the size of the military. In early 1917, Berlin began conducting open submarine warfare, and five American merchant vessels went down. Wilson initially tried to maintain neutrality while fighting off submarines with armed American merchant ships, but their guns were ineffective against the underwater attacks of German U-boats. Final efforts for peace were abandoned when German Foreign Minister Arthur Zimmermann approached Mexico seeking a military alliance. Outraged American public opinion overwhelmingly supported Wilson when he asked Congress for a declaration of war on April 2, 1917. 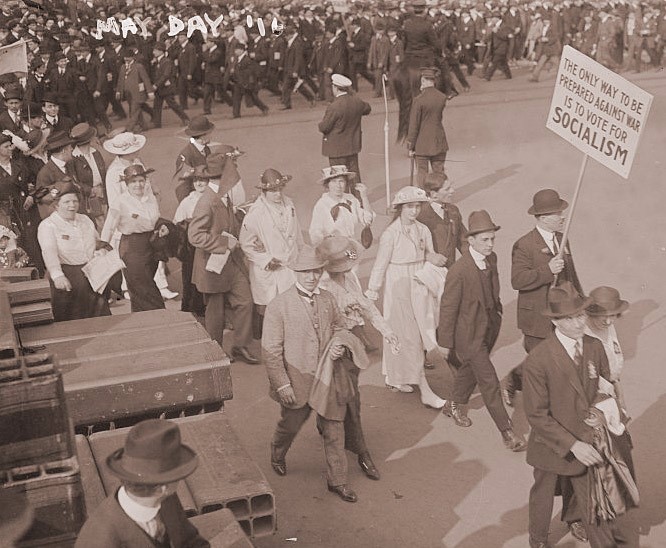 Although the United States entered the war three years into the fighting, there was a high level of confusion regarding the needs of a wartime nation. Then efficiency took root in a systematic mobilization of the entire population and economy that produced the soldiers, food supplies, munitions, and money needed to win the war. The federal government set up a multitude of temporary agencies employing 500,000 to 1 million new workers. 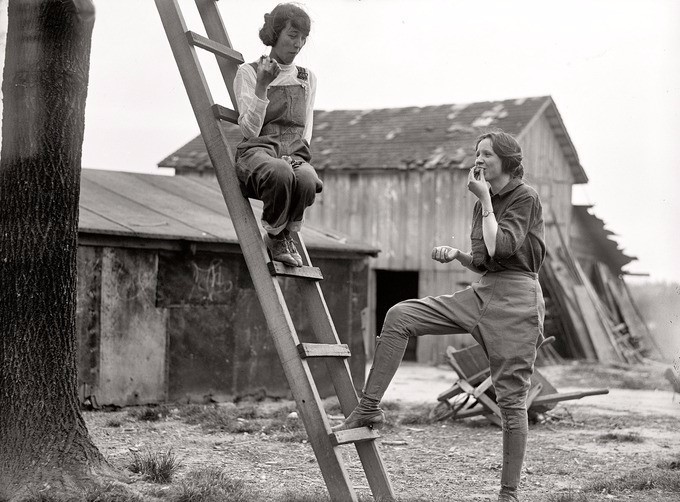 The Selective Service Act, or Selective Draft Act, enacted May 18, 1917, authorized the government to raise a national army through conscription for American entry into World War I. It was envisioned in December 1916 and brought to President Wilson shortly after America broke off relations with Germany in February 1917, leading to Wilson’s April request for a declaration of war. The draft was canceled when fighting ended in November 1918.

Wartime legislation temporarily trumped Americans’ rights to religious freedom and to freely speak, publish, or petition the government. The Espionage Act of 1917 made it a crime to pass information with the intent of harming the success of American armed forces. Congress followed with the Sedition Act of 1918, which expressly prohibited speaking, writing, or publishing anything against the government and the war effort of the United States or its allies. This wide characterization of crimes included activities such as inciting insubordination, disloyalty or mutiny, refusal to serve in the armed forces, or interfering with military recruitment operations. Famed labor movement leader Eugene V. Debs— the Socialist Party presidential candidate in 1904, 1908, and 1912—was arrested in June 1918 for making a speech in Canton, Ohio, denouncing military conscription and urging listeners not to take part in the draft. Congress repealed the Sedition Act on December 13, 1920, although those convicted under the law continued to serve their prison terms. 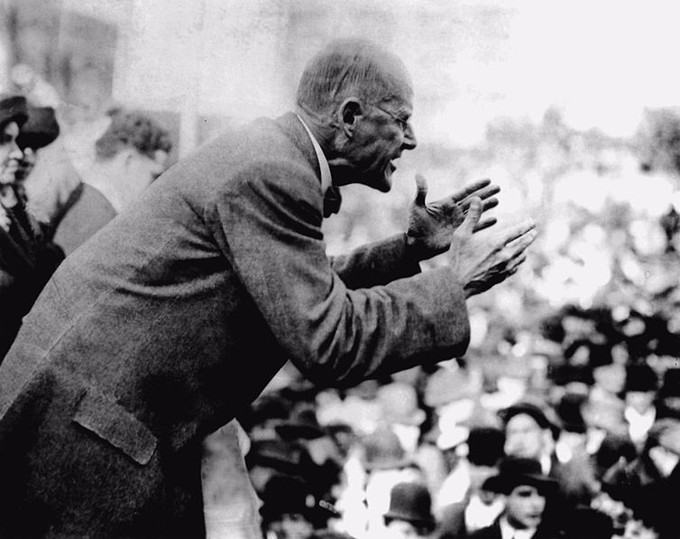 America needed to turn from a wartime climate to domestic peace when the war ended in November 1918. The Wilson administration, however, had not fully planned for the rapid demobilization of troops who returned to America without jobs. The combination of a major recession, labor strikes, and social upheaval including race riots, resulted in a postwar period that was very difficult for the nation.

Beginning about 1915 through the 1930s, in what became known as the “Great Migration,” more than 1.5 million blacks left the South and moved to northern cities seeking better living conditions including more work and an escape from the common vigilante practice of lynching. Segregation was still a reality, but African-American workers filled new positions in expanding industries and jobs formerly held by whites, increasing resentment. The “Red Summer” is a term for the race riots of the summer and early autumn of 1919. The Chicago Race Riot that began on July 27, 1919, was the worst example of the mob violence that swept the country.

In the autumn of 1919, the so-called Haynes Report identified 38 separate riots in widely scattered cities, in which whites attacked blacks. It was reported that between January and September 1919, white mobs lynched at least 43 African-Americans, with 16 hanged and others shot, while another 8 were burned at the stake.

In the 1920s, American nativists —those who favored people born in America over naturalized citizens or immigrants who held foreign citizenship—focused their attention on Catholics, Jews, and southeastern Europeans. Nativists aligned their beliefs using racial and religious criteria and arguing against the perceived dilution of America’s ethnic purity by an influx of new immigrants from the Mediterranean, the Balkans, and eastern Europe, especially from Poland. The second incarnation of the Ku Klux Klan flourished by using strong nativist rhetoric filled with this racial bias. 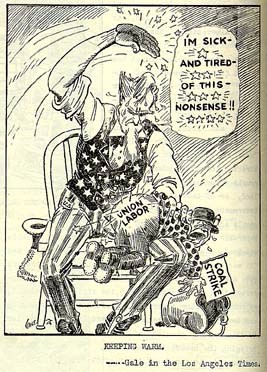 Uncle Sam “Keeping Warm,” 1919: “Keeping Warm” was the title of this cartoon in the Los Angeles Times, a conservative newspaper, demanding federal action to stop a coal strike, November 22, 1919.

The organized labor force also suffered a great deal during the 1920s. The country was fearful of the spread of Communism in America, and public opinion hardened against labor union members who attempted to disrupt the order of the working class. The public was so anti-labor union that in 1922, the Harding administration was able to procure a court injunction to destroy a railroad strike of about 400,000 workers. That same year, the government took part in ending a nationwide strike comprising about 650,000 miners. The federal and state governments had no tolerance for strikes and allowed businesses to sue unions for any fiscal damages that occurred during a strike.

At the outset of World War I, there existed a long-standing system of power brokering called the Concert of Europe, a core group of the wealthiest nations ruled by monarchical empires that guided the fate of Europe through shifting coalitions and treaties, some of which remained secret until they were needed. This came to a bloody climax when these alliances clashed and sparked World War I, drawing into conflict not only the great nations of Europe and their colonies, but also the United States.

Initially, liberal Progressives in America were opposed to U.S. involvement in the war. Yet they eventually came to believe that, in contrast to the Concert of Europe, America possessed a superior moral position as the only great nation devoted to the principles of freedom, democracy, and self-determination, and that those ideals could be achieved in a just war. The most important proponent of this concept was President Wilson, who in 1917 won the support of a large number of these moralists by framing World War I as, “a war to make the world safe for democracy,” and the time to fight for Progressive ideals. The greatest model of these ideals was Wilson’s Fourteen Points speech, which eventually became the basis for an end to World War I and the establishment of a League of Nations.

The Fourteen Points was a speech given by Wilson to a joint session of Congress onJanuary 8, 1918. The address was intended to assure Americans that the Great War was being fought for moral causes, including postwar peace in Europe. Delivered 10 months before the armistice with Germany, the speech became the basis for the terms of the German surrender as negotiated at the Paris Peace Conference in 1919. Wilson’s speech translated many of the principles of Progressivism that had produced American domestic reform into foreign policy encompassing free trade, open agreements, democracy, and self-determination. The speech was the only explicit statement of aims by any of the nations involved in World War I and led to Wilson receiving the 1919 Nobel Peace Prize for his efforts to create a peaceful global community.

The United States became a major player in world affairs following World War I, with a greatly expanded “sphere of influence” that went far beyond the Americas. Thanks to Wilson and the Fourteen Points, the United States was one of the “Big Four” nations—along with Britain, France, and Italy—that led the negotiations resulting in the Treaty of Versailles. 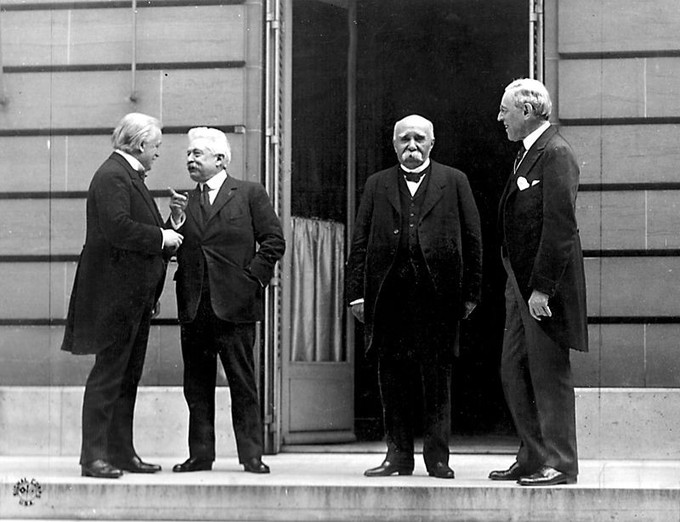 The “Big Four” of Paris, 1919: This photo shows the Council of Four at the Paris Peace Conference, May 27, 1919. From left to right: Prime Minister David Lloyd George of Britain, Premier Vittorio Orlando of Italy, French Premier Georges Clemenceau, and U.S. President Woodrow Wilson.

In addition to the redrawing the map of Europe, one of the greatest changes in international relations caused by World War I that remains today is the competition for control over the Middle East. The Sykes-Picot Agreement was a secret arrangement between the United Kingdom and France in 1916, with Russia offering its assent, under which the western powers would take control over the defeated Ottoman Empire’s territory in Arabia, which today is considered the Middle East. Following World War I, America was considered a friend to the region—rather than a colonizer like the European nations that carved it up through Sykes-Picot—resulting in deals with American oil companies to develop the region’s resources. This, in turn, has led to the ongoing interventions in the region by the United States and its allies.

The Legacy of the War

World War I resulted in millions of casualties and widespread destruction. Many died in battle, while others succumbed to disease and malnutrition. The economic toll of the war was incredibly high, causing widespread starvation and homelessness throughout Europe during the winter of 1918–1919. Additionally, somewhere between 20 and 40 million people—more than the number who died in the First World War itself—were overrun by an influenza pandemic known as “Spanish flu” that in 1918–1919 spread throughout the world, including in the United States.

Americans found themselves in a nation that was vastly changed by World War I. The United States was at the height of its authority, wealth, and influence on the world stage, but only after having experienced a period of great economic changes, the testing of government powers over civil liberties, a redrawing and redefining of political parties, and even violent fighting among its own citizens in disputes involving color, ethnic origin, labor class, and geography.

The legacy of the Great War was the creation of policies and conditions that are still felt in the United States today, both in its international modernity, while leaving unsettled many older issues and problems that continued through the ensuing years of economic troubles and new global conflict.