Conclusion: The Successes and Failures of Progressivism

Conclusion: The Successes and Failures of Progressivism

Although the Progressive Era brought reform to government and business and increased political power for many citizens, its benefits were limited to white Americans; African Americans and other minorities continued to experience discrimination and marginalization during this era.

Summarize the successes and failures of Progressive efforts during this era

The growing middle class’s dissatisfaction with the corruption and inefficiency of politics as usual, and the failure to deal with increasingly important urban and industrial problems, led to the dynamic Progressive movement starting in the 1890s. In every major city and state, and at the national level as well, and in education, medicine, and industry, the Progressives called for the modernization and reform of decrepit institutions, the elimination of corruption in politics, and the introduction of efficiency as a criterion for change. Leading politicians from both parties—most notably Theodore Roosevelt, Charles Evans Hughes, and Robert La Follette on the Republican side and William Jennings Bryan and Woodrow Wilson on the Democratic side—took up the cause of Progressive reform.

Political corruption was a central issue, which reformers hoped to solve through civil-service reforms at the national, state, and local levels, replacing political hacks with professional technocrats. The 1883 Civil Service Reform Act (or Pendleton Act), which placed most federal employees on the merit system and marked the end of the so-called ” spoils system,” permitted the professionalization and rationalization of the federal administration. However, local and municipal government remained in the hands of often-corrupt politicians, political machines, and their local “bosses.” As a result, the spoils system survived much longer in many states, counties, and municipalities; for example, the Tammany Hall ring, survived well into the 1930s when New York City reformed its own civil service. Illinois modernized its bureaucracy in 1917 under Frank Lowden, but Chicago held out against civil-service reform until the 1970s.

Women became especially involved in demands for woman suffrage, prohibition, and better schools; their most prominent leader was Jane Addams of Chicago. “Muckraking” journalists such as Upton Sinclair, Lincoln Steffens, and Jacob Riis exposed corruption in business and government along with rampant inner-city poverty. Progressives implemented antitrust laws and regulated industries such as meatpacking, drugs, and railroads. Four new constitutional amendments—the Sixteenth through Nineteenth—were prompted by Progressive activism, and resulted in a federal income tax, the direct election of senators, prohibition, and women’s suffrage. The Progressive movement lasted through the 1920s; the most active period was 1900–1918.

Although Progressivism brought greater efficiency to government, established a more equal playing field for business, and increased the political power of ordinary citizens, the biggest failure of the Progressive Era was its exclusive nature. The Progressive Era coincided with the Jim Crow era, which saw intense segregation and discrimination of African Americans. The legitimacy of laws requiring segregation of blacks was upheld by the U.S. Supreme Court in the 1896 case of Plessy v. Ferguson. The ruling on Plessy thus allowed segregation, which became standard throughout the southern United States, and represented the institutionalization of the Jim Crow period. Everyone was supposed to receive the same public services (schools, hospitals, prisons, etc.), but with separate facilities for each race. 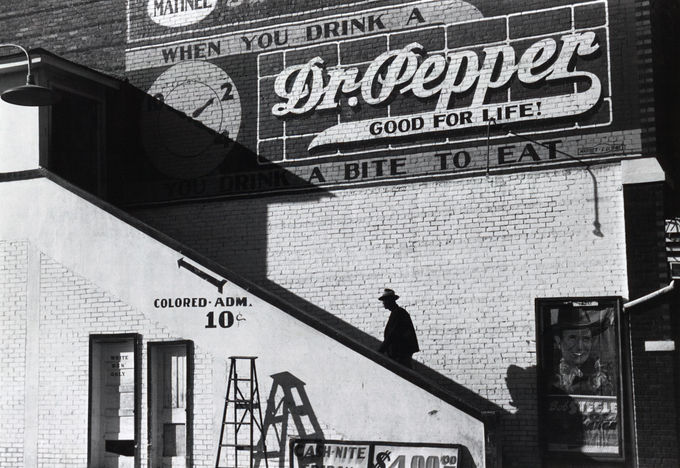 Segregated cinema entrance: A black man goes into the “colored” entrance of a movie theater in Belzoni, Mississippi, 1939.

In practice, the services and facilities reserved for African Americans were almost always of lower quality than those reserved for whites; for example, most African-American schools received less public funding per student than nearby white schools. Segregation was never mandated by law in the northern states, but a “de facto” system grew for schools, in which nearly all black students attended schools that were nearly all black. In southern states, many laws were enacted that disenfranchise black voters. State legislatures passed restrictive laws or constitutions that made voter registration and election rules more complicated. As literacy tests and other restrictions could be applied subjectively, these changes sharply limited the vote by most blacks. These discriminatory practices were not outlawed until the 1950s and later.

Furthermore, racism often pervaded most Progressive reform efforts, as evidenced by the suffrage movement. Specifically, as women campaigned for the vote, most Progressives argued on behalf of female suffrage as a necessary reform to combat the influence of “corrupted” or “ignorant” black voters in the election booth. Civil rights and Progressive reforms were thus mostly exclusionary projects that had little real influence on each other in the early twentieth century.

The Progressive reformers of the time focused little of their effort on improving the lives of African Americans and other minorities.

Additionally, the Progressive Era was characterized by loose, multiple, and contradictory goals that impeded the efforts of reformers and often pitted political leaders against one another, most drastically in the Republican Party. For instance, national Progressive leaders such as Roosevelt argued for increased federal regulation to coordinate big business practices while others, such as Wilson, promised to legislate for open competition. At the local, municipal, and state levels, various Progressives advocated for disparate reforms whose concerns ranged as wide as prisons, education, government reorganization, urban improvement, prohibition, female suffrage, birth control, improved working conditions, labor, and child labor. Although significant advancements were made in social justice and reform on a case-by-case basis, there was little local effort to coordinate reformers on a wide platform of issues.